Last week our community, and especially our very large running community, lost someone whose smile was legend.  He was my former student and friend, and he was friend to countless people spanning the generations who had encountered him through his long-time cheese stall at the popular Boyce Farmer’s Market and through his running clinics at the Running Room over many years.  For all those runners, and there were literally hundreds, Mark’s smile and gentle but convincing encouragement were what they credited for getting them across the finish line, providing a sense of personal accomplishment they had not thought possible. 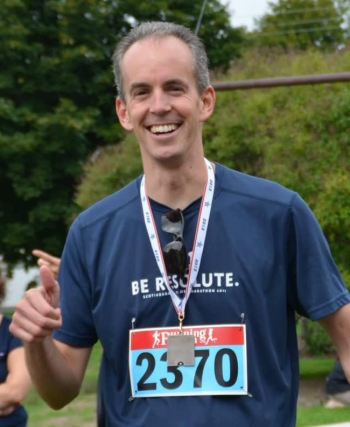 Mark Kirby died of cancer last week, just a few weeks short of his 50th birthday.  His body finally said “enough” after 4 years of fighting the cancer.  When the cancer left him unable to run, he instead attended every race to support all the other runners, serving as the race photographer, and helping and encouraging in every way possible.  Just his presence and his smile gave people who knew him (pretty well everyone) that extra spark to want to give their all.  Seeing him taking photos along a race route gave you extra energy.

Mark wasn’t rich by way of making tons of money, but he was rich in other ways.  He wasn’t famous because he developed some new medical advance to save the world (although he certainly was a valuable subject for testing several new experimental drugs in the past few years).  And Mark wasn’t an elite runner making his career out of conducting running clinics.  He took a “learn to run” clinic himself in 2007 and fell in love with everything about it: the challenge, the sense of personal fulfillment, and especially the sense of community.

The Running Room has a business model that probably wouldn’t catch on in every culture.  The establishments sell all manner of running gear, and they entice new customers by offering running clinics that meet one evening and one weekend morning for a set period of time leading up to a target race.  It may be a Learn to Run Clinic, a 5K clinic, or a 10K, Half Marathon, or Marathon.  It may be a local race or a destination race.  And, get this, the clinic leader is a volunteer even though the runners pay to sign up for a clinic.  As well, the clinic leader is just as committed to doing the target race as the participants.  This model was just made for someone like Mark.  Between 2007 and 2017, when his diagnosis became clear and he could no longer run, he ran countless 10Ks, half marathons, and 13 marathons in several different cities, all with his clinic group at the time.  All with that famous smile, and all with nothing but words of encouragement for others while he worked to complete his own goal.

Mark loved puns.  It could be a bit unnerving; he could think of a pun for just about anything you happened to be doing or saying.  He loved puns that people shared with him, and he really loved his own puns!  In 2018, when Mark was having to leave the province for treatments that would require him to stay there for several weeks, the running community decided to raise money to help with the costs of the travel and the stay.  They held a Bad Pun Fun Run to raise money, and 125 crazy runners went out in the dark on one of the coldest November days any of us could remember, and ran for Mark. 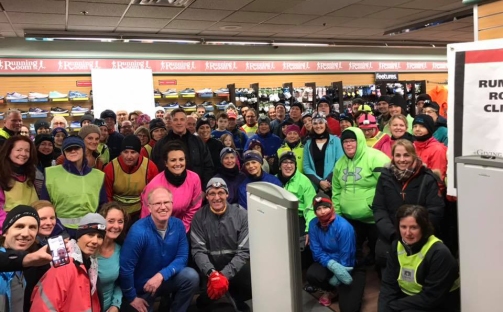 They started a Facebook group called Bad Pun Fun Run for Mark Kirby so that people could share puns with him to help keep his spirits high.  This group has 412 members, and the number of posts – of puns – is in the 1000s.  Some are even funny! 😉  I’ve even posted a fair number myself.  At the moment the group page is filled with posts of fond and heartfelt memories, but my guess is that the pun posts will continue and Mark’s smile will continue to radiate for all who knew him. 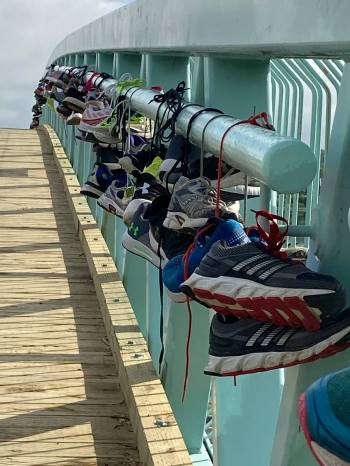 One person posted a suggestion that people wear one of the race shirts they wore to one of the races they had done with Mark to the family visitation a few days hence.  The large, socially-distanced group paying their respects were setting a new standard in funeral parlour attire, with perhaps 75% of the visitors wearing race shirts from many different races.

Mark Kirby has left a lasting legacy through the power of a warm, ever-present smile and generosity of spirit.  The world needs more people like Mark. 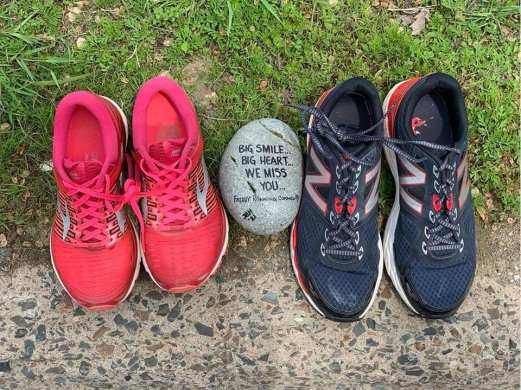 This entry was posted in Running and tagged being there for others, encouraging others, Mark Kirby, running, Running Room, smiles, smiling. Bookmark the permalink.