Looking for a race that includes more than one country? Look no further!

In an effort to try to think about something other than the unsettling state of the world, I’ve spent some time today looking into opportunities around the world for people to come together for running races with a difference – ones that encompass more than one country. The idea of cross-border races popped into my head because I knew that such a thing exists and, given that borders between countries seem to be thickening at alarming rates, including the one south of us, I wondered how many such events might be available. Runners and spectators alike always have so much fun at destination runs, cross-border races might be something that should encouraged to improve cross-border relations. Who knows?  What better way to promote understanding between nations than bringing people together through sweat, sneakers, sore muscles, Gatorade, and exchanges of race swag!

My Sunday afternoon research suggests that unless there are many cross-border running races that have not bothered with any online presence (which would be really, really counterproductive for them), there are precious few. Most of these are between Canada and the U.S., but there were a few interesting surprises.

These 8 races are the only cross-border international races I could find. Not many, is it?! Does anyone reading this know of any others? If so, they need better promotion!

I found a few races that go across state lines in the U.S. and one that crosses a provincial border in Canada (the Nova Scotia to New Brunswick Cross Border Challenge that runs across the Tantramar Marshes in June). Those sound like fun, but they don’t carry the same weight of international cooperation as cross-border races between countries.

The Istanbul Marathon, run in October or November every year, has always advertised itself as the only race in the world that includes two continents. It starts on the Asian side of Istanbul, crosses the Bosphorus on the First Bosphorus Bridge, passes many historic sites, including the Blue Mosque and Hagia Sophia, and then ends in the İnönü Stadium in the European part of Istanbul. For runners who like running across bridges, there are three bridge crossings on this route! Although the inter-country cooperation isn’t present, it undoubtedly has plenty of international feeling, not to mention incredible sights and a wealth of learning opportunities. 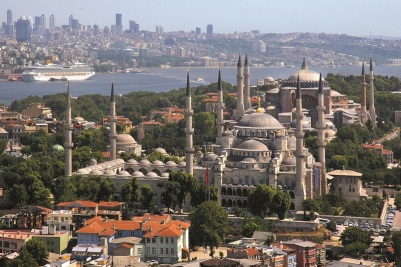 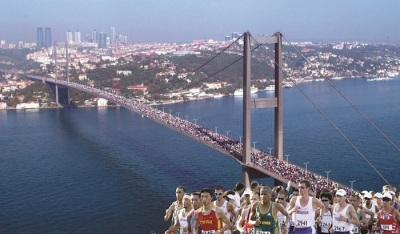 Running really is good for your mental and physical well-being, maybe even your spiritual well-being. And when you can’t run anymore you have so many wonderful memories to draw on! What other destination races would readers recommend, especially for slow runners who love to see new places and learn about the world?

15 Responses to Looking for a race that includes more than one country? Look no further!