The fable of the porcupine and the cows

Communication is important; nobody disputes that.  Miscommunication can be as a result of differences in use of language, imprecise use of language, contextual or cultural misunderstandings, interpretation based on false information, hearing impairments, or simply not listening.  Interpretation based on expectation by gender is often a further challenge to effective communication.  One anniversary card I saw recently provides a good example:

—- Woman: Well, here we are, together for another whole year.

Listening and Understanding … The key to every great relationship.

I’ve been thinking about communication and its challenges because a weekly discussion group I belong to has started off the fall season with the topic of the philosophy of language.  It’s a tough slog, but fortunately our group has a good sense of humour!  One of the several intriguing, fascinating, convoluted, and obscure points we’ve wrestled with so far is the difference between the communication attributed to animals, allowing for their survival, and the advantages humans have with our capacity for language, which supports survival and also the development of thought and abstraction.

It strikes me that there must be times when miscommunication between animals results in confusion and mishaps on the part of their young, regardless of whether or not they are able to abstract from what they experience and learn.  What’s a young animal to do if her parents aren’t clear in their life lessons?

I thought back to the incident two of our cows had with a porcupine in our field all those years ago (Lessons from raising cows).  I had never thought of it from the perspective of the porcupine before, just from the perspective of a young couple (us) who had to extricate all those quills from our cows.  But considering all the roadkill at the side of the road this time of year, it dawns on me that there are lots of lessons for porcupine parents to communicate to their young.

Polly Porcupine spent many, many hours listening to her parents describe the threats out in the big world: what she should watch out for and how she could take care of herself.

Mama Porcupine:  “There are lots of big animals out there, but you will be safe from almost all of them because of your quills.  There really is just one kind of animal you have to watch out for.  They will hurt you very badly if they come too close.  They are big, very big.”

Papa Porcupine:  “And their feet are big and round and move very fast.  They usually stay off the grass.  Whatever you do, stay away from them.”

Polly:  “What colour are they?”

Papa Porcupine:  “They come in different colours.  Could be brown, black, red.  Lots of colours.  Sometimes they are alone and sometimes they are with friends.  They usually walk in single file.  Actually, they usually run.  They never seem to eat.  And they don’t seem to be scared by quills at all.”

Mama Porcupine:  “Polly, you know that if you find yourself in a scary situation you should turn with your back to the scary animal and hit with your tail full of quills.”

Polly heard this warning over and over, but didn’t have a very good idea of what they might look like.  She decided it was time to go look for herself.  She knew how to be careful.

She left her home in the hollow of their tree one summer morning and moseyed through the nearby pasture.  She liked being on her own.  It felt so good to be wandering through the long, fragrant grass that she forgot to be mindful of possible dangers.  Besides, she was in the grass, and her parents had told her that they weren’t usually on grass. 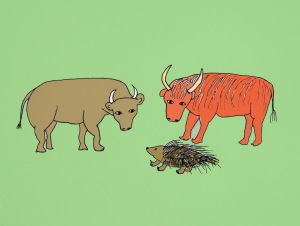 And then, the next thing she knew she was looking up, way up, at two big brown animals.

“Oh no,” she thought to herself. “I wonder if this is They.  Definitely very big, very brown, and very scary looking.”  She gathered up her courage and asked, “Are you They?”

The cows looked at each other, not knowing what this strange little creature was talking about.  She didn’t look like something to eat, but she didn’t look like anything they’d ever seen in their pasture before either.  They couldn’t remember their parents telling them anything about such a funny looking thing, small and full of prickles.  “We’re Clare Cow and Jenny Cow,” said the shaggy one.  “Who are you?”

While the shaggy one was speaking, Polly looked at their legs.  They didn’t seem round, and they weren’t running, but they still looked scary.  They had two enormous pointy thinngs on their heads, like giant quills.  And they had a funny smell to them, although her parents hadn’t mentioned smell.  Polly decided she should try the defense her mother had told her about; she turned around, closed her eyes, and shoved her tail in their direction as hard as she could.  They were just bending over to smell her at that time and she got them right in the face.  It was a strange feeling; she lost lots of the quills from her tail.  When she turned around again to see what happened, those giant animals were running across the field towards a building.  “Aha,” she thought. “Papa said They run most of the time.  This must be They after all.  OK, now I know how to recognize them.  And now I also knows that my quills really do scare them, so I will always be safe.”

And with that knowledge, based on imperfect communication and imperfect interpretation, she confidently continued her stroll through the pasture, heading for the road.  Be careful, Polly!

Moral of the story:

Communication is key … or … Seeing is believing, but maybe it shouldn’t be.

6 Responses to The fable of the porcupine and the cows