This week’s Map Monday is an effort to show what languages are spoken around the world. I have learned a lot about the importance of language as central to culture and identity by virtue of where I live, which I will explain below. If your mother tongue is English, as mine is, and you live in a majority English-speaking region, as I do in North America, then you probably don’t think about it too much. You think of language as a way of communicating: communicating your needs, your wants, your questions. And that’s true, partly. If you go to a country or region where another language is spoken, being able to ask for directions in that language makes it easier and also makes the experience more enjoyable. Being able to carry out a conversation with a local in that local language makes the experience even more enjoyable. But language is far more than the straightforward act of polite communication.

I’m going to say more about this below, but I’ll start with the maps. When I went looking for maps that would show the languages spoken around the world, I knew it would be a challenge. Canada alone is a challenge, with its two official languages and more minority languages. Belgium has three official languages. Switzerland has four. India has two nationally official languages, but 22 recognized official languages around the country, and many more minority languages. And these are just starting examples. So I was prepared for it to be a difficult search, but not for it to be an impossible search. I actually found a site called Misleading Language Maps on the Internet which shows several maps and what’s wrong with them, but provides no maps that get its seal of approval. I’m going to give you a few examples here.

This next map shows the second most popular language in a few countries. It helps give a flavour of what languages are common in a country besides the main one. There’s lots of detail if you just enlarge it (click on the image and then zoom with your browser). 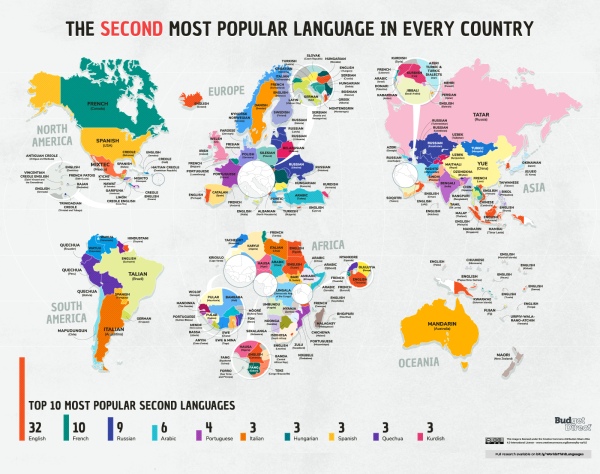 This map shows the third most popular language in each country. The surprising result for nearly every country gives you an idea of how inadequate maps are to describe the richness and diversity of the languages around us.

This next map attempts to show the families of languages around the world (enlarge for the details). I include it because it at least includes major indigenous language groups. However it still overlays the imported European languages on top of them. But at least it’s trying. 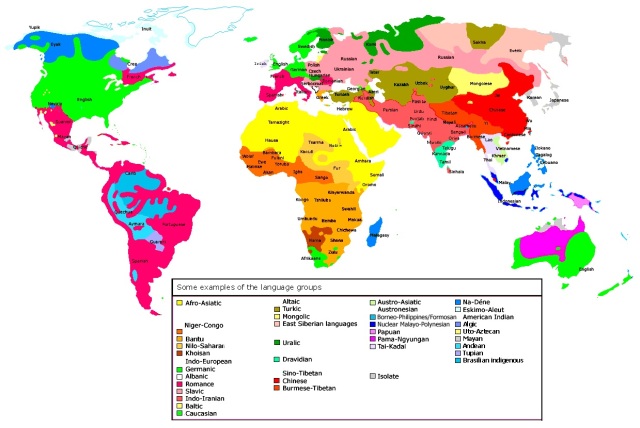 As you can see, these maps leave a lot of questions and are easily open to misinterpretation. I admit to being quite disappointed in the lack of quality in information. Disappointed because language is about far more than just an ability to communicate with others. Language is intrinsic to the expression of culture. Language is the means by which culture and its traditions and shared values are conveyed and preserved. A language is formed by a society’s culture, even by the landscape of the culture. A society’s language is an integral part of making that society and its history unique. Your mother tongue language – the one you started out with – is and will always be an important part of your identity. It’s a part of who you are.

When Europeans began colonizing large parts of the planet nearly 500 years ago, the European colonizers disrupted and – in many cases, yes – destroyed populations and, as best they could, wiped out their native languages. Canada’s biggest shame, the treatment of our first nations and Inuit peoples in their own land, is a shame shared by virtually every country that was colonized by Europeans (or their European offspring, the U.S.). And one of the main pillars of subjugating the indigenous peoples in the efforts to ensure that the colonizers got everything they wanted (land, resources, and power) was to wipe out the indigenous languages. Speak English. Speak French. Speak Spanish. Speak Portuguese. In other words, your languages are inferior, your cultures are inferior.

As an offshoot of this practice among colonizers, aka conquerors, I live in a country and a province that have two official languages, the languages of our two competing colonizers, English and French. In Canada, first the French came and engaged in a variety of relationships with the indigenous peoples they encountered – some hostile, some fruitful – and in more cases than not they found ways to co-exist. Then the British came. Not a good mix. Eventually, the British made a perhaps unprecedented arrangement with the French whereby the French settlers in Quebec were accorded their rights to language and church when the Brits took over what would later become Canada. The French Acadian settlements in the Maritimes of Canada (now New Brunswick, Nova Scotia, and Prince Edward Island) weren’t so fortunate. The British rounded up the men, women, and children in their churches, burned their barns and homes, and put them all on ships to somewhere. No real plan, just get them out of here. That period in history is known as the Acadian Expulsions (or more politely, the deportations). Many ended up in Louisiana (the Cajuns) and in other parts of the eastern seaboard.

Many of the deported returned to Acadia and resettled with fellow Acadians who had hidden in remote parts of an already remote part of the world. As a result, Acadian history, culture, and language are alive and well in my small province of New Brunswick. New Brunswick is the world centre for the preservation of Acadian heritage. We are an officially bilingual province, with 30+% of our population French-speaking Acadians. My Acadian friends are fiercely proud of their heritage and their language. They live it every day in their homes, their schools, hospitals, nursing homes, and public places. Always.

Aside from French and English, in this same small province we also have a number of first nations (indigenous) peoples; they speak their own languages as well as English or French, languages that had been used for thousands of years until the ‘settler’ governments began marginalizing them through spurious means.

In Canada, you can find large pockets of mother-tongue French-speakers in many provinces across the country. You can find numerous indigenous languages spoken. In the Arctic regions of Canada, 80+% of the population speaks Inuktitut at home. And of course, in the multicultural society we have embraced, there are numerous immigrant communities that speak different languages at home. And yet on the world maps of languages Canada shows as speaking English, with some maps adding an inaccurate shading of Quebec and, strangely, parts of Newfoundland as speaking French. That’s inaccurate and misleading.

Complicated national language stories similar to Canada’s can be found in many countries around the world. It’s just not that simple. Surely there are ways to produce maps that tell the real story, the story of the richness of languages used around the world.

For those of you with a real interest in what languages are used where in the world, here is a non-map diagram that can answer most your questions (really needs expanding!). 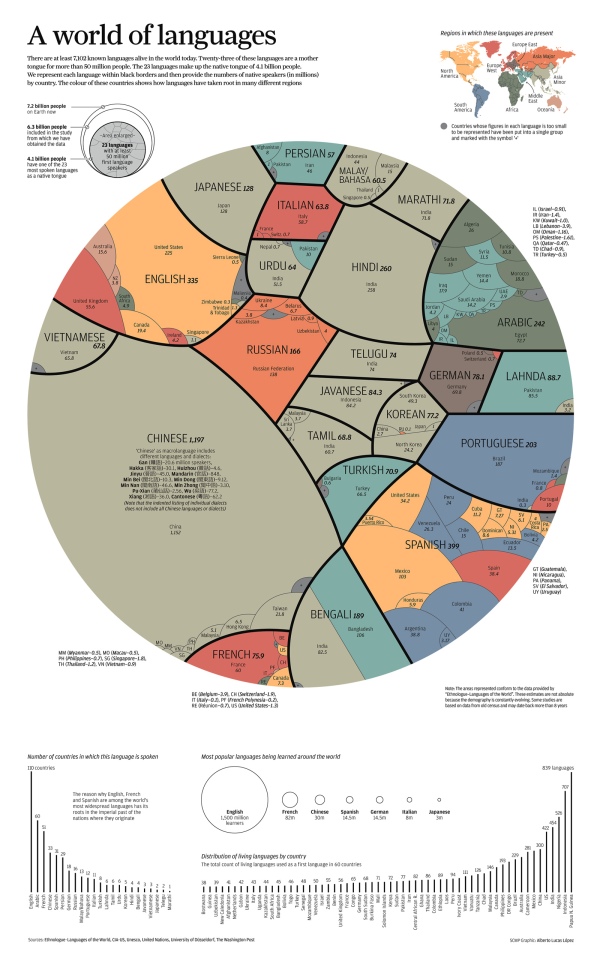