Grandmothers, granddaughters, and the Circle of Life

I’ve been a grandmother for 7 years now. Not a grandmother who lives across town from her grandchildren, who has the family for Sunday dinner every week, and who has home-baked cookies waiting when the grandkids drop by. But, for two enchanting (well, usually) children, I am the one who comes to mind when they hear the word “Grandma”. It’s a wonderful role. If you’re lucky, at least a few times a year you get to play with them, be silly, cause a little trouble, help a little, and then go home with Grandpa. There’s someone else around to do the heavy lifting – the care and feeding and the day-to-day nurturing: their parents. 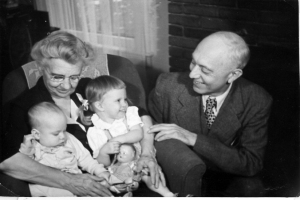 Sometimes being a grandmother brings back memories of my own Grandma. My Mom – her daughter – had some issues with her, but not me. I remember long sessions of playing dominos, and later lots and lots of Scrabble. She was my Grandma, as simple as that. We loved each other. And here’s the rub – she was old. There was my generation – the kids. There was my parents’ generation – the grownups. And there was the grandparents’ generation – the old people. Now that I make the calculation, my grandmother was exactly my age when this picture was taken. Scary thought.

So along with the delight of grandmotherhood and the joy of observing your own children transformed into loving, responsible, and patient parents, there is the slowly dawning awareness that my grandchildren must think of me as old! Me!! Old!!! That realization takes some getting used to. To my granddaughter I’m Grandma – and old – but to me I’m Jane, the same Jane I was when I was her age, when I was in high school, when I left home for university, and ever since. As those of you who are ‘older than you used to be’ know, what you see in the mirror is a continual surprise. The person inside your head doesn’t feel older.

What I really hadn’t thought of at all prior to becoming a grandmother myself is that my Grandma wasn’t just an old woman who I loved and who played dominos and Scrabble with me. She was Luella. She was the same person she’d been as a child growing up in Lockport, NY. She was the same interesting woman she’d been when she taught special needs children in NYC 100 years ago, before she was married. She was the same person who had lived her life of ups and downs through the upheavals of two World Wars, the Depression, and huge societal changes, including the introduction of electricity, automobiles, airplanes, and antibiotics. She had to have had opinions to share. But that’s not how our relationship was defined. We were grandmother and granddaughter and we shared comforting activities and the love that went with it. Period.

Perhaps if she’d had a different personality she would have shared her stories. Now I wish that she had, but it never crossed my mind to ask. And I’m not sure that in the end it really mattered. My worldview was that of a girl whose universe revolved around her friends, herself, and, occasionally, her parents. The notion that my grandmother was a fully functioning person who had a lifetime of experiences and reflections to share never crossed my mind. She was there to be my grandmother.

The humbling reality is that I’m not going to be seen any differently by my grandchildren. Their world view is just as mine was when I was a kid. That’s the way it should be. And there’s no doubt that this worldview includes the certainty that Grandma is old. It’s already been made clear to me that my granddaughter never wants to have hands like mine (presumably having to do with their Grandma-like brown spots and prominent veins), nor feet. And more recently she’s observed that I have a moustache, not in an altogether complimentary tone. Now, as I examine my face in a mirror once or twice a day, trying to keep evidence of a beard at bay, I see lots of unwelcome lines that I (happily) don’t see from more of a distance. These lines on my face remind me of one of my favourite grandmother-granddaughter stories, told to me by a very good friend. Her young granddaughter, who loved to draw, was encouraged to draw portraits of her grandparents. The picture of her grandfather showed a man with a beard and lots of lines on his face. When my friend looked at the picture meant to be her, she was a bit perplexed. She wondered if maybe the little girl had been trying to draw her with a beard as well. However, her granddaughter cleared things up by explaining, “I ran out of space for your mouth because the lines took up too much room on your face.” Out of the mouth of babes!

I have come to accept that there is just too much of a gap in age and worldview for young grandchildren to appreciate connections across generations. They’re too young and too busy learning about how they fit into their immediate environment. And it seems that, regardless of how much they may enjoy our company, the idea that they could ever be like us is too painful to contemplate! It might not be until they become grandparents themselves that their memories of time with their own grandparents will re-emerge and take on significance. For grandparenthood is integral to the Circle of Life. It’s a vivid reminder that we are part of a continuum. We can remember being a granddaughter (or grandson); we now find ourselves in the grandmother’s (or grandfather’s) role; and we find ourselves imagining our own young grandchild going through the same process, with their own grandchild, bringing along their own memories of us. The Circle of Life. It’s a gift to be part of it, old or not.  Not that I’m old!

17 Responses to Grandmothers, granddaughters, and the Circle of Life