This past January saw a spate of articles in the New York Times on older women. It started with Jessica Bennett’s article “I am (an older) woman – hear me roar”, followed closely by Mary Pipher’s “The joy of being a woman in her 70s”, and then Emily Eakin’s short review on February 1 with the enticing title of “70 and female is the new cool” .

Being female and in my 70s, these titles couldn’t help but draw me in. I wondered if anyone who wasn’t female and at least 60 would have been particularly attracted to the titles or the content within, but apparently they were very popular reads. 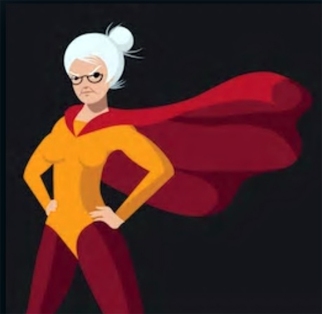 The impetus for the articles, other than to create interest in Mary Pipher’s new book, seemed to stem from the fact that a few older women now find themselves in positions of power. The examples used in more than one of the articles were: Glenn Close for winning a Golden Globe at age 71; Nancy Pelosi for being Speaker of the House at age 78; Maxine Waters, first female head of Congress’s Financial Services Committee at age 80; Donna Shalala, oldest first-term representative in Congress at age 78 (wow, to start that work for the first time at age 78 is darn impressive); and, Susan Zirinsky, newly appointed head of CBS News and at 66 the oldest person to ever assume this position.

That’s five women. It’s great news for all of them and also for the public that they serve or entertain. But it’s just five women. And most people – men and women – just don’t have the stamina that is needed for these jobs by the time they hit their 70s. I guess part of my issue with this is that these articles are meant to be about all the amazing or at least constructive things we can (still) do – and do well – as we age. But the examples are a bit problematic. Politics is a particularly questionable sphere to use as an example, since leadership roles are so often assumed by old(er) people. In the U.S. in particular, the average age of lawmakers headed to Washington has increased every election until the most recent one, with the average age being a near record of around 60 for congressmen and senators. It’s not like there are a lot of younger female leaders around Capitol Hill (although that might change!). And not only will the current president be 74 if he runs for another term, but Bernie Sanders will be 79 and Joe Biden will be weeks away from 78. I‘m not at all sure that this is good news, even if they were all female. But that’s just me.

One of the main points the articles are trying to make is that as women age, they have an increasing amount of experience and wisdom to bring to the workplace, as well as to other things they do. And, apparently, many women are continuing to work past 65 and even past 70. But this may be the case for many reasons, and these articles are very short on meaningful details.

Well educated professional women may very well continue to work past 65 for the same reason that their male counterparts do, because they love what they do and simply cannot imagine not doing it. This works fine if you are in good health and have good support systems in place … until it doesn’t work anymore because your health or stamina is no longer what it once was and you realize that it is time to learn how to navigate the next phase of life. When you have a fulfilling avocation and no pressure to retire, this is a fine path.

It also may very well be the case that women keep working in their late 60s and their 70s because they have no other option. They have no financial lifeline without a job, or perhaps they are supporting a family member who is not able to work. The only good news here is that legally they should not lose their job because of ageism. I’m not at all sure these articles resonate well with these women.

There are many work/non-work scenarios, most of which are nowhere near as notable as the positions in which the five examples find themselves. However, there are aspects of having made it into your 70s that I think have real advantages for women. (And maybe for men as well, although I hesitate to make that assumption and be told otherwise!) These advantages can bring help joy to our lives, as long as we make that choice. Mary Pipher speaks of some of these.

Joy is a word that in some ways defies definition. Sometimes joy is a quiet emotion, one of peace and awe, such as the warm feeling of watching something beautiful in nature (although not a caterpillar on a garden path, as was suggested in one of these articles). For some of us, joy can be found in settling down with a good book on the sofa, with the option open to take a nap. There is joy in completing a race, or watching your team win a tough game, or watching a loved one experience success. One of the greatest joys of all is watching a young child – OK, or cat or dog – engrossed in something that has captured their attention. That feeling of delight at simply observing a young child or animal in a special moment is universal.

And for those of you who have a long way to go before you hit 70, just so you know, experiencing joy should not diminish in the slightest as you age. You just may need to look for it in different places from time to time.