If I had a million dollars … or how about $60 million?

It’s hard (at least for me) to hear the question “what would you do if you suddenly had a million dollars?” without thinking of the Barenaked Ladies perennial favourite, “If I Had $1,000,000”. And if you don’t know it (gasp) or haven’t heard it for some time, try listening to this YouTube recording; I guarantee you will be humming it for days afterwards. Try it and see if you don’t succumb!

Legend has it that the Barenaked Ladies, one of Canada’s most beloved of bands, came up with this very Canadian ditty back in 1988, asking themselves the same question many Canadians were asking themselves, captivated by the possibility of winning Lottery 6/49, which started in 1982. Sure, there had always been lotteries of one kind of another, but now Canadians were (and still are) actually encouraged to buy lotteries from government-sponsored agencies on a weekly (and then twice a week) basis. All those chances to win a million dollars simply by buying a $1 (and eventually $3) lottery ticket, choosing your own favourite 6 numbers. And, gosh, even if you didn’t win you were still contributing to sports, culture, and other government programs. How can you lose?!

I will admit to being a weekly 6/49 devotee. My husband and I have bought tickets for both Wednesday and Friday draws for years now. After all, once you have used the same 6 numbers for a long time, how can you stop? How would you feel if your numbers came up right after you stopped buying your ticket?! And so, naturally, we have played the remarkably engaging game of “what would you do if you won the lottery” several times. What would you do if you suddenly had an unexpected $1,000,000? To be honest, we usually only play that game when the pot has grown to an unusually high number. Just so you can see what I mean, what if you suddenly found yourself accepting a cheque for $17,000,000? Tax-free. One humungous tax-free cheque. One million is spendable. Depending on your time of life and circumstance, you can pay off your mortgage and car, help out others in your family, go on a few fancy trips, and then you’re pretty well done. Maybe you can slip in some university tuition and braces for kids or grandchildren, but that’s about it. Scary, eh? If you live in an expensive place like Toronto or Vancouver, just paying off your mortgage may or may not be doable with $1 million. But $17 million or more, which does indeed show up in the 6/49 every once in a while, is a different story.

We happen to be in the so-called golden years of life, and we are in the fortunate position of no longer having a mortgage or car payments. So when playing the lottery game, we keep $1 million for future nursing home expenses (hoping we never need this, but still …), give $1 million to each of our two kids (this is just a game, kids), give healthy sums to each of our 5 siblings (once again, just a game, siblings and families), and then we still have an enormous wad left. And this is where I’m really heading. If you have an opportunity to donate a significant sum of money to one or more worthy causes, what do you give to? How do you decide? How do you ensure that your donations are having maximum impact in areas that you think are most deserving?

When we’ve played this game, we have given ourselves a theoretical $5 million each to distribute according to our own individual preferences. And, although we are committed to several charities, neither of us have come up with definitive plans for how we would distribute our theoretical largesse to best advantage. Post-secondary education support for needy students, for indigenous students, support for the environment, specific programs dealing with poverty, health, our community, the arts; there’s no end of deserving entities. It’s not as easy as it may first seem to decide how to distribute philanthropy responsibly. Who knew? But at least we have a leg up on all of you who haven’t even thought about it. When we win big, we at least know that making these decisions will be difficult. Fun and rewarding, but difficult.

Now, what if you had $60 million tax-free dollars, over and above any outstanding debts, to use to make a difference in the world? What would you do? As a matter of fact, Canada’s Lottery 6/49 has had two winning pots in excess of $60 million, including a $64 million win in 2015 that was won by one individual, so it’s a real possibility! I don’t know how all that money was used by those winners, but just this past week there was a news article about a Vancouver couple who gave away $60 million dollars.  They donated the $60 million, basically their entire fortune, to the Arctic Inspiration Prize. Their story and their reasons for having established this prize in the first place are fascinating and compelling. Both immigrants, he from Switzerland and she from Iran, they clearly have done very well economically in Canada. But the important part for me was reading of their love and enormous respect for the Arctic and in particular for the peoples of the Arctic. I share their feelings, although I have most definitely not skied to the North Pole as he has! The understanding and respect they have for the challenges facing the proud and resourceful Inuit of the Canadian Arctic is heartwarming. The Inuit, who have lived in the most severe imaginable living conditions for thousands of years (including several months each year in total darkness), had their lives disrupted profoundly as a result of colonializing decisions enforced on their way of life. Repressive and aggressive government policies through many decades have resulted in assaults on their language, culture, and the well-being of their families. As well, climate change, caused by practices adopted by people far away from the Arctic, has had a far more dramatic and rapid impact on the Arctic (and Antarctic) regions than on areas away from the poles, and this significantly threatens their way of life. It’s not just the polar bears, folks. 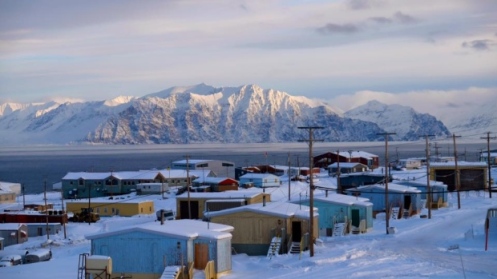 And so, my admiration for this philanthropic couple, Arnold Witzig and Sima Sharifi, knows no bounds. The idea of the Arctic Inspiration Prize is to provide researchers with funding to undertake projects specifically to aid the people of the Arctic. As described in the Globe and Mail:

‘Sima Sharifi and husband Arnold Witzig announced Wednesday that they will give $60-million to the Arctic Inspiration Prize (AIP). The couple, in their 60s, founded the prize in 2012 after falling in love with Canada’s North and have since financed annual awards – which now total $3-million a year – that support teams of Arctic researchers. Their new donation ensures the sustainability of the prize long into the future.

“We wanted to inspire, enable and somehow celebrate all these achievements of the people in the North,” Mr. Witzig said in an interview with The Globe and Mail.

“Without having grassroots and youth really participate and come forward with their own ideas, you can try as much as you want as a government, it won’t work. Here, we thought the prize could step in and really contribute.”

The prize gives groups of Arctic researchers financial support to study opportunities or challenges for the Canadian Arctic, including educational, health, environmental and economic issues. The prize, which awards multiple teams from $100,000 to $1-million, was established in 2012 by Mr. Witzig and Ms. Sharifi. The 2018 laureates were recognized Wednesday night at an AIP awards ceremony in Ottawa, where the organization also unveiled its new $60-million donation.

Kevin Kablutsiak, a 2013 laureate who is now executive director of the AIP, said the evolution of the prize over only a matter of years is “tremendous.”

“From my own perspective, being Inuk from Canada, from the Arctic, and seeing Arnold and Sima being so generous and giving of everything they have to the Arctic, it’s really hard to fully say and express the gratitude that I feel and that many of us feel,” said Mr. Kablutsiak.

“Some of these projects that have won would normally never get any kind of money that they get from AIP from elsewhere.”’

This couple has played the “what would you do if you won the lottery” game and has come up a winner. They have been able to contribute generously to a cause that is dear to their hearts. In doing so, they are making a truly significant difference to a people that have been struggling to adapt to the modern world in an extreme environment without the independence to make their own decisions. This Arctic research will hopefully also contribute to our understanding of the frightening damage being done to the Arctic region through the lack of attention to the perils of climate change, which cannot help but benefit both northerners and southerners.

And now for the question of the day: what would you do if you won the lottery – one of the big ones?!

19 Responses to If I had a million dollars … or how about $60 million?