Running a marathon with a twist: the inspiring London firefighters

I don’t know how many of you have run a marathon, either competitively or at a very recreational pace (me), but it’s hard. It’s a long distance, very long. It takes a lot out of your body. And that’s when you are kitted out in optimal running gear, streamlined and designed for running comfort. Running gear designed for chafing and blister prevention. Running gear that allows spines, shoulders, and arms to have full freedom of motion. Sounds obvious … and essential. So running a marathon – or even 1K – in full firefighter kit seems like a non-starter. Big time.

But that’s the plan for a remarkable group of London firefighters (see BBC video clip). These amazing men are in training to run the London Marathon in full firefighting gear and breathing apparatus, which amounts to an additional 30 awkward, uncomfortable kilograms (that’s 66 lbs). I can barely imagine walking 500 meters in that kit, more less running 42.2 kilometers (26.2 miles). But on April 22 of this year, a group of 18 firefighters who were first responders at the heartbreakingly tragic Grenfell Tower fire last June will be doing just that. This group of men, from the North Kensington and Paddington Fire Stations, are carrying out this superhuman feat as a way of helping others. They are running to raise money to help local Grenfell victims and also for the Fire Fighters Charity, which provides needed psychological and physical support for firefighters who were part of the Grenfell response team.

Just watching the sight of an entire block tower engulfed in flames on TV was traumatic enough. Viewers could see people at their apartment windows in real time, with flames behind them, screaming and beating on the glass. The shots on TV were effectively showing people just before they died a horrible, painful death, right in the heart of London. And we were all helpless to do anything. Now imagine what it was like for the firefighters on the scene, who did all they could and more, but of course that still wasn’t enough to save 71 fellow human beings, or to save the housing and possessions of hundreds of people. Right in the middle of one of the richest cities in the western world. A tragedy of such monumental proportions, crushing the lives of so many, because the cladding used on the building was never subjected to required fire safety tests. A tragedy of monumental proportions for which follow-up action and accountability is slow to come. 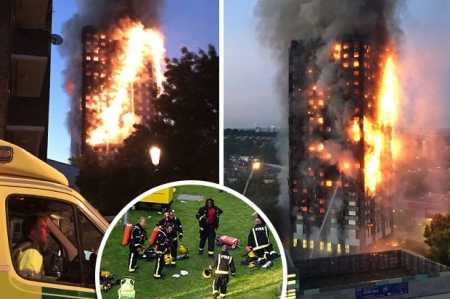 It isn’t surprising that the firefighters who served – and continue to serve – so honorably were severely impacted themselves. The experience of being in the middle of such human horror is not something one forgets. What is perhaps surprising, but unbelievably inspiring, is that these firefighters, having gone through so much themselves and having provided levels of support that have everyone’s eternal gratitude, are going to challenge themselves to this extraordinary extent in aid of the fire victims. In this strange world in which we find ourselves these days, where leadership, especially moral leadership, seems to be in short supply, these firefighters stand out as true leaders. I am overwhelmed with their heart, even as I shake my head at the crazy challenge they have set for themselves! From Canada, I will donate.

Route of the London Marathon

(I wonder if any council members of the Royal Borough of Kensington and Chelsea, who oversaw many questionable decisions about the tower, would consider joining the marathon. Or they could just make major donations!)

9 Responses to Running a marathon with a twist: the inspiring London firefighters