Fleeing Ukrainians – why does it never stop?

When we think of paintings by the famous French painter Mark Chagall (actually Russian-French), we typically think of his dreamlike themes and brilliant use of colour.  Always imaginative.  Often free-floating.

But he also painted powerful paintings that didn’t dance and weren’t dreamlike.  Powerful, yes, but free-floating, no.  One such powerful painting has been posted many times on social media recently, and appropriately so.  It’s entitled La Famille Ukrainienne.  The Ukrainian Family. 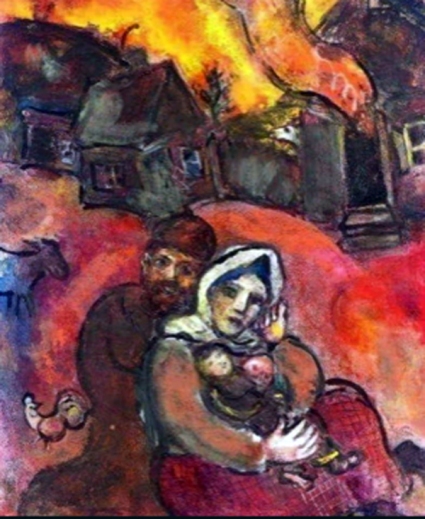 Only, of course, Chagall didn’t paint this work of art in the past 6 weeks, since the Russians invaded Ukraine and started unleashing such devastation, brutality, and death.  He painted it sometime between 1940 and 1943, when Ukrainians were fleeing the war and destruction brought about by another Russian, Stalin’s “Great Terror”.  It is uncanny – and heartbreaking – to realize that this scene could just as easily be depicting what is going on right now, 80 years later.

For today’s actions by Russia towards Ukraine aren’t new, they’re just equally heartbreaking and evil. During the years of Stalin’s brutality, literally millions of Ukrainians were deported to the gulags.  At least 500,000 of them are thought to have died there. Once Hitler began the second front against the Soviet Union in World War II, Ukraine became a main focus. Historical research estimates that up to 7.7 million people, more than one fifth of the population of the country, perished at that time.  Ukrainians know their history and know that their sovereign nation is worth fighting for, as is the freedom to choose how they live.

Marc Chagall had a personal reason for portraying a Ukrainian family fleeing war in that part of the world.  He was born into a Lithuanian Jewish Hassidic family in a town in what today is Belarus, very close to Ukraine.  Born in 1887 (and living until 1985!), he left the artistic and religious restrictions of what was then the Russian Empire in 1910 for Paris, but continued to have very strong ties to his homeland, to his hometown of Vitebsk.  Little of Vitebsk survived the years of occupation and destruction of World War II. His feeling of connection to the horrors being perpetrated on the Ukrainians at that time would have been visceral.

To close on a more upbeat note, I hope you can find some moments of joy and wonder in these few examples of Marc Chagall’s splendid free-floating paintings. 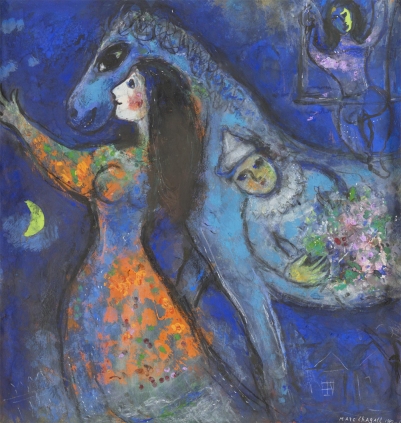 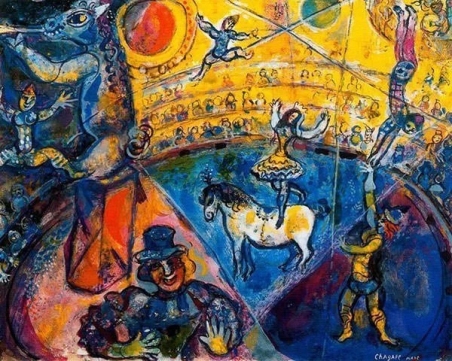 This entry was posted in History and Politics and tagged art, history, Marc Chagall, Russian invasion, The Ukrainain Family, Ukraine. Bookmark the permalink.

34 Responses to Fleeing Ukrainians – why does it never stop?