A few weeks ago I wrote a blog about World Speech Day, which occurs every year on or about March 15. Since our son and grandchildren were due to arrive on March 16 to spend their March Break with us, I had fond hopes of our expanded household embracing the notion of each of us giving a short speech on a topic of their choice. What could be more fun?! Of course, thanks to COVID-19, travel to anywhere except getting home and staying home came to a halt just as they were about to come. Perhaps the one thing that my grandchildren were happy about with this change of plan was that Grandma couldn’t bug them about doing a speech!

It’s not that I didn’t keep trying. It seems like such a fun thing to do, even more so when you are all home all day looking for things to do. I’ve now tried the lead-by-example approach remotely via technology, twice. They have humoured me by sitting on their sofa and watching the PowerPoint presentations I had lovingly created and sent to their in-house tech (Dad) while giving my “speech” through FaceTime. I’ve chosen topics that I thought would appeal to them. But it appears that I have not made the slightest bit of progress in convincing anyone involved – grandchildren, son and daughter-in-law, or Grandpa – that it would be fun for any of them to give it a try. I have officially conceded that one. For now.

However, the “speech” I gave them this past Saturday is a topic worth sharing. Because, although at the moment it may feel like we’ll never be able to travel anywhere again, those times will return. We just don’t know when yet. But while we’re all hunkered down, what better time to prepare or revise your bucket list, so you’ll be ready for action when we’re given the green light.

The topic was one near and dear to everyone in my audience: How to pick your favourite Botswana animal. My son and daughter-in-law spent two of their early years together living and working in Botswana, in southern Africa. My husband and I had the pleasure and privilege of spending 6 weeks camping with them in May of 2001, exploring all that Botswana has to offer in their used Toyota truck. With 2 tents, one safely on the truck roof and one set up each night on the ground as we listened to the roar of lions in the distance. My husband and I have been to something like 60 countries together and our time in Botswana ranks as our #1 lifetime adventure (with Bhutan a close second). Our son and DIL have always wanted to take their kids to Botswana, and so, after lots of saving and planning, this past summer they spend 4 weeks with their 13-year old daughter and 10-year old son, undertaking a very similar Botswana adventure, complete with encounters of very close kinds and getting the truck stuck in deep soft sand. It’s a tradition. This time they had two safe roof tents! [And aren’t they thankful that they hadn’t planned it for this summer?!] 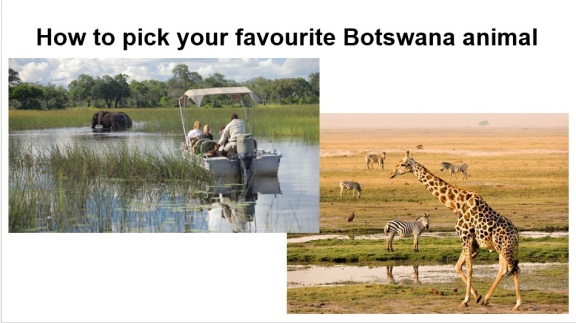 Botswana is a wonderful country. It’s friendly, safe, spacious, and has an unimaginable offering of animals. As was explained in my PowerPoint presentation:

The quest of the Grandma-speech event was to decide which animal was the very favourite of all that everyone had seen in Botswana. But of course that was a trick question. There’s no way there could be one favourite. It was almost impossible for each person to even choose their top 3. But they had given that their best shot in advance. To give you an idea of the variety of what they saw and what they picked for their top 3, we had: 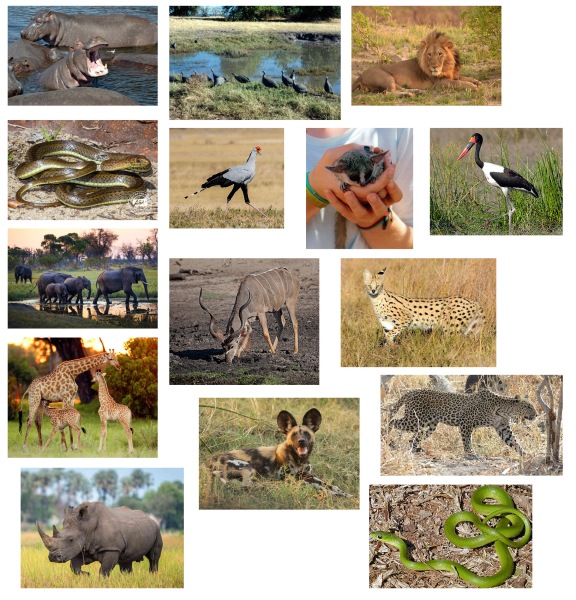 By restricting myself to three, I couldn’t add in the beautiful carmine bee-eaters, who nest in holes in the steep sides of the Chobe River. I couldn’t add the brilliantly coloured lilac-breasted roller. Oh, all the birds! The list of omissions is endless. And the reality is that it is the experience of watching the animals and the special circumstances in which you encounter them that stays with you. And the evocative landscapes, with the thorn trees, baobab trees, termite mounds, and papyrus-lined water courses. Not to mention the breath-taking 360 degree sunsets. 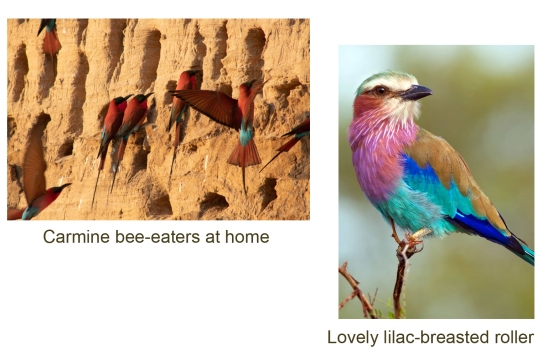 The truth is that no one animal or anyone’s top 3 list can fully capture the wonder, majesty, and delight that is found among the animals in the wilds of Botswana. So for those of you who are working on a new or revised Bucket List for when the world returns to a normal or new-normal state, I highly recommend including a trip to Botswana. The trip of a lifetime. You won’t be disappointed.

Other Botswana posts:
Stuck in the sand in lion country
Warthog on the runway; we’ll just wait a minute