Warthog on the runway; we’ll just wait a minute

Note: This post is a continuation of Stuck in the sand in lion country

I’ll admit it, I had never heard of the Okavango Delta.  And when I was told it was the world’s largest inland delta, that didn’t help.  I have to admit this as well: I had never heard of an inland delta.  It turns out that there are a few rivers that never make it to the sea.  In the case of the Okavango Delta, the river that feeds it starts in Angola and, after running for 1500 kms to Botswana, spreads out over a large flat swampy area, aka inland delta, in the Kalahari Desert. This is where the river ends, largely evaporating during the dry season.  During the rainy season each year the Delta refills with nature’s gift of water and, not surprisingly, attracts an enormous diversity of wildlife.  We were lucky; we were there just after the rainy season ended.  The sun was shining, the channels of the delta were full, the grasses and trees were green, and wildlife was there in abundance. 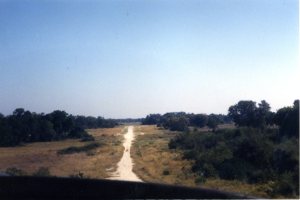 Landing strip in the Delta

We flew into the Delta in a light aircraft, landing on an airstrip that was reminiscent of the smallest of sandy tracks we’d been driving on in the bush.  The morning we flew out of the Delta we had to wait for a warthog to get off the “runway”.  The young pilot told us that a leopard had been spotted in the grass by the runway early that morning, undoubtedly hoping for some easy warthog pickings.  This flying experience made perfect bookends for our time in the Delta, although it would be a tough beginning and ending for anyone with a fear of flying!

The outfitter camp we landed at was situated by one of the channels of the Delta, which seemed to be a favourite haunt for some very vocal hippos.  Accommodation consisted of spacious platform tents, along with an ablution block and a central bar and lodge area for eating, drinking, exchanging stories, and generally chilling out.  At the water’s edge several mokoros (dugout canoes) were beached, waiting to take their guests to their appointed camping spots out in the bush.  The main admonitions we were told upon arrival were: (1) if you go to the ablution block in the night look out for warthogs under your tent or on the path and (2) stay away from hippos, which are the most dangerous animals in Africa.  “Yes, that is what you hear roaring in the channel, right over there.”

We had an introductory ride in our mokoros the first afternoon, our son and daughter-in-law in their mokoro with guide Peter and my husband and I in our mokoro with guide Jeremiah.  It was remarkably beautiful and peaceful, until we saw a big hippo open his mouth wide and give a very convincing roar.  This was going to be interesting. 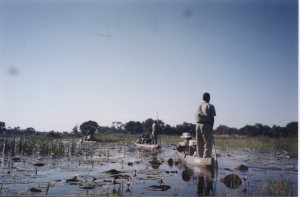 The next morning we piled our camping gear, food for two days, and three people in each mokoro and headed out for our new adventure in the bush.  Magic mixed with adrenalin.  Gliding through papyrus and other reeds, listening to the calls of the green spotted doves and songs of numerous other birds: priceless.  Young Peter being clearly nervous of being back on the water with hippos, having just returned to guiding after having been thrown from his mokoro by a hippo:  a reality check.  We eventually set up camp, had an initial foray into the bush, and settled into an evening of eating stew around a campfire, listening to the sounds of the bush, and listening to our guides’ hopes for the next day.

The highlight of our time in the Delta was to be our walking safari.  What exactly is a walking safari, you might ask.  It’s just what it sounds like; it’s game viewing without a vehicle!   Instead of sitting in your vehicle, driving very slowly, straining your eyes for any sign of animals, you do the same thing on foot.  I hadn’t given this a lot of thought in advance, except to think that it would be totally awesome.  But I was starting to realize that you really need to trust your guides!

Breakfast in the bush

Peter and Jeremiah had some signals of a lion kill “over that way”, so after breakfast the next day off we went.  It all seemed so reasonable, walking through a scene from a documentary on the Nature channel, confident that our two local guides knew what they were doing.  [As our older son asked afterwards, “Didn’t your guides have guns like mine did?”  No.  I never thought about that at the time.]  Every once in a while Jeremiah would borrow our binoculars, climb a termite mound, and check whatever he was checking to reassure himself that success was within sight.  One thing we did notice was that they were happy to stay as far away from elephants as possible.  If we didn’t see any at all that would be fine with them!

Eventually we did indeed find the lion kill.  The remains of a buffalo lay in the grass, with an eerie, dark cloud of vultures hovering around it, making unnerving – very unnerving – whooshing sounds with their flapping.  Hyenas hung back in the tall grass, waiting for their chance.  It was not a welcoming scene, and definitely gave a different impression on foot than it would have if we had been watching from inside the perceived safety of our truck.  As we closed in, my husband whispered to me, “Let’s go home now”, not 100% kidding.  The vultures and hyenas must not have realized that we were more frightened of them than they were of us, because fortunately they gave us wide berth. 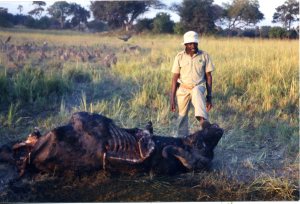 Jeremiah with the kill, vultures hovering in the background

After examining the buffalo carcass, which really smelled bad, we continued on.  Of course, the four of us had absolutely no idea where we were, but we still had utter faith in our guides.  Jeremiah pointed out the responsible pride of lions, peacefully digesting their meal of buffalo and having a post-prandial rest on the bank on the opposite side of a body of water, a good 1000 meters or more away.  We walked on a bit in their direction, heading towards a stand of tall grass, with the intention of positioning ourselves behind the tall grass to get a closer look.  That was when our son said, “Are those some lions in that grass right there?”  Good eye, kid!  The suggestion was quickly made that we take a sharp left and walk purposefully away from them.  Happily, those stray lions were young’uns and were no more sure of us than we were of them; they took off at a fast clip to join the others across the water. 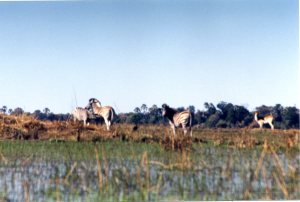 The rest of our time in the Delta bushland was calmer, although we stayed pretty alert from then on.  We came across giraffes and elephants (at a good distance) while on foot, and lots of zebra and antelope while gliding through side channels in our mokoros.  Despite a few instances in the mokoro that were closer to hippos than I would have liked, we arrived back at base camp safe and sound.

We were extremely fortunate in that, although it was hard to see our time in the Delta come to an end, we had more Botswana adventures awaiting us.  Hence, we were able to leave our Okavango Delta adventure without the letdown that comes when a wonderful trip is coming to an end.

It wasn’t until the conclusion of more camping adventures in our son’s truck, Maximus, sharing a campsite with elephants in Savuti, and being overwhelmed with the vast herds of wildlife and birds on the Chobe River that the sad feeling of a real ending hit.  We were leaving Botswana – and our son and daughter-in-law for the time being – but taking some extraordinary memories, which have continued to nourish us ever since.  It is difficult not to feel the pull of the African savannah once you have been there.  Pure magic.

Botswana: #1 of our top 5 favourite trips of all time.

7 Responses to Warthog on the runway; we’ll just wait a minute