Stuck in the sand in lion country

If one of your kids ever ends up working in Botswana for 2 ½ years and you get asked to come along on a camping safari in your kid’s second-hand truck, be sure to say, “Yes.”  Sure, there may be some moments of doubt as the itinerary unfolds, but for a life experience it’d be hard to beat.

Several years ago, our younger son and his lovely partner (now our daughter-in-law) lived in Gaborone, the capital of Botswana, working for NGOs there.  She had only been there for 6 weeks when we arrived to start our adventure, while he had been there for 6 months and was already an old hand at safari gigs.  One of his first purchases had been a used safari truck, christened Maximus, of which we were a major investor.  By safari truck, I mean one of the ubiquitous white Toyota half tons found throughout Africa and the rest of the developing world, with the all-important add-ons of a roof-tent and a game-viewing bench in the back of the truck.  Having Maximus parked at their house was a daily reminder to our son that game viewing was never far away. 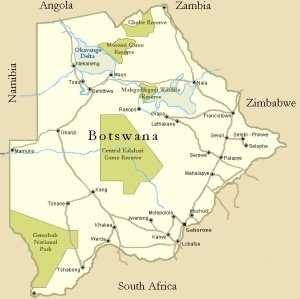 Our son had already regaled the three of us with stories of what he had seen and done prior to our arrival, including a trip with some new friends to the north of Botswana in Maximus, during which they became surrounded by literally hundreds of elephants.  He couldn’t wait to share the amazing gifts of nature this country had to offer.  He had planned an ambitious trip; he didn’t want us to miss a thing.  Our itinerary included a night at the Khama Rhino Sanctuary in Serowe, a night in Maun, time in a fly-in camp in the Okavango Delta, complete with a walking safari, then extensive travels in Maximus, stopping each night at a pre-determined campsite, hoping to encounter as many species of animals as possible in Savuti and Moremi, along the Chobe River, and then at Makgadikgadi Pan near Nala.  Phew.  Maybe we’d even make it to Victoria Falls.  Talk about a trip of a lifetime.

Before I go any further, Botswana deserves recognition; it is an African success story.  It’s a country with lots of land and it’s not overpopulated.  It’s been a stable democracy with a growing economy ever since its independence from the U.K. in 1966.  And there are lots of big animals, and not just in the national parks.  And birds … OMG.  Too many types, sizes, and colours to absorb.  If there were nothing to attract you but their birds, Botswana would still be a stunning destination.  The very first afternoon we were in Gaborone, still stretching our legs from the long plane trip, a huge grey go-away bird landed on the telephone line by their house.  Huge.  Wow.  I knew then we were in for a special time.

In the Okavango Delta

Once on the road, our son had to have been pleased with how well his plan was unfolding.  The accommodations in the Rhino Park were a treat, the afternoon of driving around encountering white rhino was exhilarating, and grilling delicious Botswana beef under the stars by an enormous baobab tree was beyond perfect.  The drive to Maun was fascinating, the flight into the Okavango Delta in a light aircraft, flying low over herds of elephants and other animals was amazing, and our time in the Delta was extraordinary. 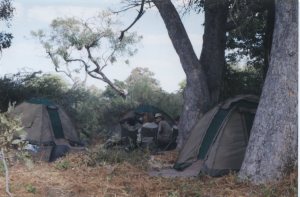 Tenting in the Delta bushland

We spent the first and last nights at the Lodge, sleeping in platform tents, and the other nights in tents out in the Delta bushland with our guides. Our walking safari out there was … unbelievable.  It needs a post of its own, so for now I’ll leave it to the reader’s imagination: 4 gringo walking in the African bush with our two guides; coming to a lion kill; remains of a buffalo, vultures, hyenas, lions resting in the distance; Son: “Are those lions in the grass just ahead of us?”, Guide: “Oh, yes, so they are … let’s just quietly but quickly turn to the left and let them know that we aren’t a threat.”  Further observation: hearing the roar of lions in the distance when you have to get out of your tent in the night for a squat makes for a very quick squat!

With our eventful trip into the Okavango Delta behind us, we loaded into Maximus and commenced the next phase of our trip.  We were headed through Moremi National Park, ready for more animal sightings and with a reservation for Third Bridge Campsite that evening.  The plan started off well.  Maximus rolled slowly along narrow sandy tracks as we kept our eyes peeled for signs of animals.

Then disaster struck.  Maximus got stuck in the sand.  As is the case when driving in the bush, one expects to get stuck, but one also expects to be able to get out.  We tried the usual: putting things under and in front of the wheels to gain traction, pushing, removing objects, etc.  Nothing.  It was in deep.  An overlander with three German tourists came through and tried to give us a tow.  Again, nothing.

Dusk was falling; our would-be rescuers had to get to their campsite, which was where we were (theoretically) headed as well.  I was selected to go with them to see if we could get help from someone at the campsite.  Off we went as darkness closed in, into uncharted territory for the three Germans and me.  We got to Third Bridge in about 20 minutes; oh, my, what an eye-opener.  We really were in the bush.  This was – and is – a main campsite for Moremi National Park, but not the kind you might think of in, say, Yosemite or Banff.  For one thing, there is no fence around the site.  The tent site we had reserved had about 10 baboons in residence.  There was no main office, or any office for that matter.  There were some cleared areas for tents, to be shared with whatever wildlife was ambling by, and – importantly – an ablution block and running water.  That was it.

So with no additional help available, the nice German tourists drove me back to my stranded family, concerned themselves about getting back to their campsite before it was totally dark.  We had driven about halfway, maybe 10 minutes, when we had to stop.  There was a lioness reclining on the sandy track we were using as a road.  My German is non-existent and only one of my helpers knew any English, but we managed to communicate our mutual agitation without difficulty.  We were all going to be sleeping in lion territory tonight, with little protection!  Eventually the lioness moved to the side, just barely, and we completed the short journey to Maximus and company.  The Germans were not eager to get stuck in the sand themselves and so they dropped me off about 100 meters from our truck.  It was nearly dark, we were stuck in the sand in the middle of nowhere  – where we clearly were going to stay – and I now knew for sure that there were lions nearby.  Very nearby.

I still had to make it across the 100 meters of soft sand to my family; it seemed more like a few kilometers.  In my panic, I remembered having been told recently that outfitter clothing is always natural shades of brown and green is so that wild animals aren’t overly attracted to something unusual.  I had replied, somewhat jokingly, that I wished someone had mentioned that to me before I got there!  Now, here I was with a non-green, non-brown jacket, alone and unprotected in lion country.  I held my jacket out at arm’s length and ran as fast as I could across the soft sand, trying to watch for danger out of the corners of my eyes.  The monkeys in the nearby trees must have wondered what in the world this crazy lady was doing.

As you will have guessed, I made it.  My lovely daughter-in-law started a campfire outside the truck to keep animals away – she had read that was a good idea.  The four of us sat in the truck and ate pretzels that someone (not me for sure) had thought would be good to have and drank beer (which we all agreed was good to have).  I don’t recall that we talked about our predicament.  Then we all agreed without saying so that the next thing to do was to go to sleep, so we could wake up and hope another overlander would come through and rescue us.  That was our plan, such as it was.  It’s all we had.  Our camping arrangement normally was for the two couples to take turns with the rooftop tent and the ground tent (aka pup tent on the ground).  Nobody was going to take the ground tent that night.  Our daughter-in-law – and son – got the rooftop tent because she best satisfied the criterion of being the most nervous of four nervous people.  My husband slept in the backseat of the truck and I, not for the first time in my life, got to “sleep” across the two bucket seats and various handles in the front seat.

Miracle of miracles, not only did we not have any lion or elephant visitations during the night (unlike later incidents) but an overlander did indeed rescue us the next morning, after which a third couple joined us, friends from Gaborone, and our adventure continued to unfold.

The bushland of Botswana persisted in amazing and delighting us; it was the gift that kept on giving.  Camping in the remote campsites continued to bring us closer to wild animals than was always 100% reassuring, but certainly provided experiences one doesn’t forget.  At a campsite in Savuti, all 6 of us had to take a break from setting up camp and jump in our trucks while an elephant sauntered through, about 6 feet from the other side of our truck.  Instead of shooing away mosquitoes while cooking our food over a fire, we occasionally had to shoo away hyenas that would swoop in to take our food. Shadows in the dark could be pretty unsettling in those situations.  But, do it again?  In a heartbeat.

Sunset at our campsite on the Chobe River

I am way over my self-imposed word count for a single post, and there remain so many birds and animals to exclaim over.  I think another Botswana post is required.  I’ll try not to bore my readers!

Botswana: #1 of our top 5 favourite trips of all time.

A follow-up Botswana post can be found at Warthog on the runway, we’ll just wait a minute.

23 Responses to Stuck in the sand in lion country