The gift of running, an inclusive activity 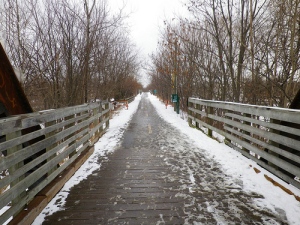 My trail on a wintery day

Yesterday was my first day of running outside since the Chicago Marathon three months ago.  After a few short, slow re-entry sessions on the treadmill at the gym last week, I donned my winter running kit and headed out for a 5 mile jog.  And, aside from the niggling feeling that my hamstring injury is not quite as healed as it should be, it felt great to be out on the trails again.  Absolutely great.

I know that the time will come when running and my aging body have to part company, and I know that my world won’t come to an end when that happens.  But running has given me a lot, especially in the past few years when I have been able to give it more time.  Running has become increasingly popular with people who have not seen themselves as athletic previously in their lives, and I place myself squarely in that category.  One of the things I love most about running is that it is an individual sport; you are only responsible for your own results and don’t have to worry about letting down any teammates.  Participating in recreational races has given me many gifts, including:

Running isn’t for everyone, but it is for more people than many think.  The articles in Runner’s World magazine usually focus on people who excel at running and the inspiring stories they often have to tell about the adversities they had to overcome to become world-class runners.  But they also include stories about the rest of us – the “mere mortal” runners – and from time to time stories with important reminders of what running can mean to people with a wide range of disabilities.  There should be no surprise that the personal rewards I have found in running are pretty well universal.

Learning disabilities.  The December 2012 issue of Runner’s World included an inspiring letter from Casey Revman, a 19-year old young woman who lives with tuberous sclerosis complex (TSC).  This genetic disorder can result in a number of disabling effects; in Casey’s situation it seems to manifest itself primarily in learning disabilities.  Her letter is a treat to read; she describes beautifully what running adds to her life.  She says, “When I run, everything is clear.  I can go at my own pace, and I’m always moving forward.  I never let anyone down; I finish in the middle of the pack. … For me, running isn’t about the recognition – it’s about how it makes me feel.”

Autism.  The October 2012 issue of Runner’s World featured a story about 4 high school students with various levels of autism or similar disorders who participated in the 2011 Baltimore marathon as a relay team.  These young men had a school principal/coach who was a runner himself and thought it would be an excellent experience for his students.  Many hours, weeks, and months of coaching, mentoring, and training were required on the part of teachers and the young men before the milestone event.  But the culmination of all that effort was worth it.  The testimonies of all involved are worth reading; they include words like “self-accomplishment”, “empowering”, “motivated”, “work ethic”, “pride” and “focus”.  The experience has changed the students involved and also inspired other students and staff to get moving.

Visual impairment.  If you pay attention when you are watching or running in a large race you will probably see some paired runners.  They may be sporting signs on their backs that alert others to the fact that one of them is visually impaired and the other is her guide.  They may even be tethered.  However they work it out between them, their collaborative relationship allows visually impaired runners to participate fully in the excitement, challenges, and satisfaction of races.  Large races are increasingly making new categories for blind and visually impaired runners so that these runners can compare their results to other runners in the same category as well as their overall age category.  There are many tips for visually impaired runners online, including how to find a guide and how to work with your guide.

Cystic Fibrosis.  Any of us who run in the middle or back of the pack will know that there are usually a few people who run at similar paces; sometimes you pass them for a bit, then they pass you, and so on and so forth.  You get to know each other if it’s a long race.  When I was running in the Chicago Marathon last year, there was a couple who were running at a pace similar to mine.  They were younger, sure, but unlike them I didn’t have a sign on my back that said “I am running with CF” or “He is running with CF” with an arrow pointing to her partner.  Eventually they pulled ahead for good.  I can tell you that watching them pull ahead motivated me to keep running longer before taking a walking break.  According to a story about Emily Schaller in the September 2010 issue of Runner’s World, the type of breathing required when running actually helps clear mucus from the lungs of CF patients.  Her story is one worth reading.  Emily’s running has made her healthier.  She now works as a motivational speaker, sharing her experiences in living with CF to encourage others. 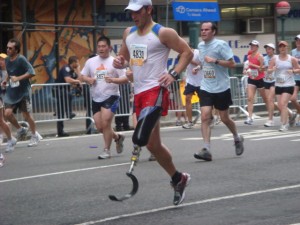 Runner with prosthetic, from arsmithiithoughts.blogspot.ca

Artificial limbs.  We all know about Oscar Pistorius, the Olympian who runs on carbon steel prosthetics, sometimes know as the Blade Runner.  But what non-runners don’t know is that there are an increasing number of competitive and recreational runners who can participate in races now because of this improved prosthetic technology.  My brother and I were in one of the last corrals in the NYC Marathon in 2011, and we were SO ready to get started when our turn finally came.  I will never forget the euphoria of being on the Verrazano Narrows Bridge, singing “New York, New York” along with Frank Sinatra (on tape) and the multitudes around us as we made our way up the bridge to its crest, looking over to the Statue of Liberty and the Battery.  As we made our way up the bridge, we were passed by a young man, wearing a T-shirt that told us he was a British war vet and also sporting an artificial leg.  My brother and I were impressed beyond measure, although we were to see many more runners with prosthetics and other mobility aids before we finished the race.

There is no denying the power of setting what initially may seem like an insurmountable goal for yourself – whether it’s running a 5K, 10K, half marathon or marathon – and then proving to yourself that you can do it.  The happy news is that this opportunity is more accessible than most people think.  The running community is becoming more and more inclusive, especially in the burgeoning world of recreational running.  I encourage you to read the full personal stories above, and if any of these experiences resonate for you or for someone you know, consider pursuing similar possibilities in your own region.  Happy running!

16 Responses to The gift of running, an inclusive activity