“We’ve never spotted seven tigers in one day before,” proclaimed the excited guide in our open-topped viewing vehicle.  He may have been exaggerating for our benefit (and his tip), but the exhilaration of that day is nearly as fresh in my memory now as when we were in India  five years ago.

This experience of a lifetime may soon be a thing of the past; the Supreme Court in India has just decreed that its tiger reserves will become off limits to tourism in order to protect tigers in their diminished habitats.  Too few tigers, too many people.  Whether or not this decision will be enacted remains to be seen.  Thousands of tourism jobs are on the line, among other things, and the decision has stirred controversy.  But the possibility alone is yet another reminder of the delicate balance between our desire to witness the world’s wilderness and heritage treasures and our responsibility to protect them.

We had always wanted to visit India, with its diverse culture, history, and colour, and when I learned that we could include a wildlife sanctuary in our itinerary, I was beyond excited.  I had never thought of India and safari together.  What a welcome surprise.   And now it turns out that we may have had an experience that people in the near future will not be able to enjoy. 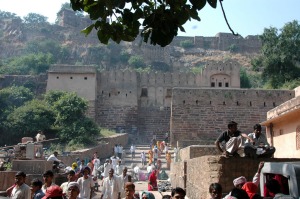 Old fortess at the entrance

Our two 3-hour game drives in Ranthambhore National Park were spectacular.  The park, a 150 square mile wonder of natural beauty in Rajasthan in northern India, was once the private hunting grounds of the Maharajas of Jaipur and is ringed by historical ruins and religious shrines.  Once in the park and on the lookout for animals, the effectiveness of the tiger’s stripes as camouflage in its native habitat became apparent.  Trying to spot something moving in shadows in amongst the slender tree trunks is very difficult.  When you are on a game drive – of any kind, you need to be focused at all times.

On the morning drive we searched and searched, following scavenger birds in the hopes that there was a tiger kill in the vicinity, and hence a tiger.  We could hear what our guide confirmed was a tiger roar.  Finally, just before we were due to leave the park at the end of the morning, those of us with really good vision – and good luck – were able to catch a glimpse of majestic Mr. Tiger through a hillside of trees.  Perhaps five out of the nine of us in our group saw the tiger, but all nine of us were jubilant.  It might be all we ever saw, or almost saw, but to be in the presence of a tiger on his own turf was an unbelievable privilege.

The afternoon drive was wonderful in the extreme.  We returned to the spot where we had earlier seen the tiger deep in the trees, with high hopes that tigers were still in the same area.  Somehow our guide knew what hints to follow and after some slo-o-ow driving along a dirt track, peering intently into the forest, we found one.  Not only could we see him in the trees, but he actually emerged from the forest, crossed in front of us, and disappeared across a field and into the forest again.

After that, it was as if we were blessed.  We came across a magnificent male lounging on the trail, waiting for his mate to come down from the hill.  So we turned off our vehicle and waited.  Eventually the female rose up and the male moved on to join her.  We had a further tiger sighting, along with many types of deer, monkeys, and a multitude of birds.

We thought we had seen it all and then some, and were heading towards the park exit as dusk fell, feeling  overwhelmed with everything we had seen.  And then, by the side of the trail was the bonus prize: twin tiger cubs.

As with other beautiful predatory animals on our planet, tigers are an endangered species.  They are endangered because of poaching and because of diminishing natural habitat, which causes the inevitable and deadly clash between wild animals and villagers and their domestic animals.  The Indian Supreme Court’s attempt to secure their future is therefore understandable, although lamentable for tourists and the tourist industry.  I am so thankful to have had the opportunity to witness these splendid creatures in their own world.