I don’t usually post a story straight from a news source, but I really want to share this one, and many (aka most) readers don’t follow links to external sources.  So rather than simply provide this link to Tik Root’s inspiring story in the Washington Post, Pakistan’s mission to plant 10 billion trees across the country, in photos, I’m going to share the article in full.  I’m including a few photos from the article, but I encourage you to take the time to click on the article and admire the many other photos. 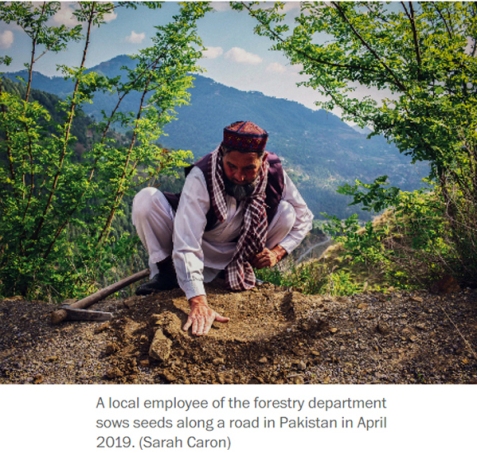 For me this article stands out as a good-news story on taking climate change seriously and also provides the chance to view Pakistan through a non-political lens.  It’s a story about people taking concrete steps to mitigate climate change, something we all need to be doing.  And doing so in a country that has many other challenges consuming their limited resources.  In the past few weeks, as Afghanistan has fallen into a cycle of despair in the aftermath of questionable exit strategies on the part of the United States, the only thing the western world has been hearing with respect to Pakistan is its unsettling relationship with the Taliban.  But what do many of us really know about this diverse country of more than 225 million people, the 5th most populous country in the world?  A country with a long, complex history within a very complex part of the world.  A country with historical ties to the people in Afghanistan, and a country buffeted by the competing interests and influences of India, Russia, China, and Iran.  It’s complicated, folks, just like everything else the world is dealing with. 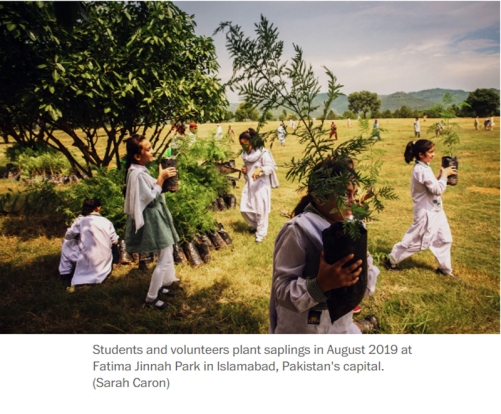 I hope you find this article as interesting as I did.

August marks the beginning of monsoon season in Pakistan, and with the rain comes another busy stretch for the country’s ambitious tree-planting program.

In Khyber Pakhtunkhwa province, residents of all stripes, from government officials to Boy Scouts, fan out along the hills. They bring with them chinar tree saplings — which can grow to nearly 100 feet tall — along with other varieties, and they begin digging.

It’s all part of an effort that started in 2015, when Imran Khan — then a provincial politician and now Pakistan’s prime minister — backed a program dubbed a “Billion Tree Tsunami.” The initiative reached its province-wide target in 2018 and was so successful that federal officials expanded the drive nationally in 2019 with a new goal of 10 billion trees — or, the “Ten Billion Tree Tsunami.”

“Everyone is waking up and starting to plant,” lawyer and environmentalist Hazrat Maaz told The Washington Post at the time.

The program addresses Pakistan’s history of deforestation as the country confronts the realities of climate change in the form of hotter temperatures, melting Himalayan glaciers and intensifying monsoon rains.

“It makes us very vulnerable,” Malik Amin Aslam, Pakistan’s federal minister for climate change, said in a recent phone call. He has overseen both the provincial and national planting campaigns. “The cheapest, most effective and quickest way to fight climate change is to plant trees,” he said.

Direct planting, Aslam explained, accounts for about 40 percent of the program’s new trees. Hundreds of thousands of people across Pakistan are working to nurture and plant 21 species, from the chir pine to the deodar — the national tree.

The other 60 percent come from assisted regeneration, in which community members are paid to protect existing forests so that trees can propagate and thrive. Protectors are known as “nighabaan,” and 11 individuals lost their lives fighting the “timber mafia” between 2016 and 2018, according to Aslam.

Whether planted or protected, trees capture and hold carbon dioxide — a greenhouse gas that contributes to climate change — and combat erosion on steep landscapes in Pakistan that Aslam says are “almost like living on a slide.”

The latest tree “tsunami” appears to be on pace. The rate of new trees has gone up tenfold since the initiative began, Aslam said. He expects another 500 million trees by the end of this year, with a goal of around 3.2 billion by 2023. If the current ruling party — Movement for Justice — is reelected, the aim is to hit 10 billion trees by 2028.

Aslam says the initiative is engaging the next generation in the country’s battle against climate change.

“Young people get very excited when they hear about this,” he said. “It’s their future that we’re investing in.” 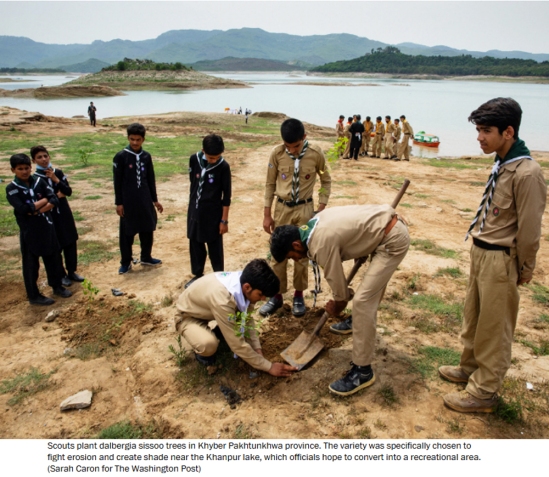 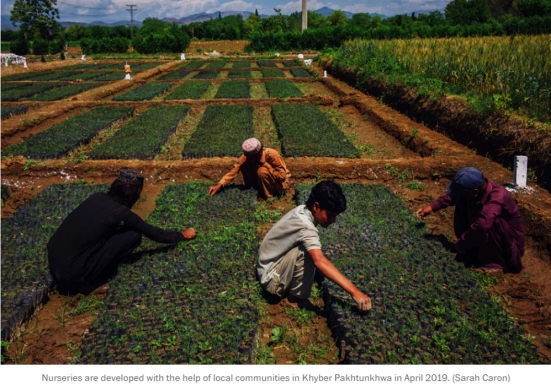 23 Responses to A good news story from Pakistan … think trees