America’s issue with socialism, so that’s what it’s all about

I can’t have been alone in wondering over many, many years why so many Americans have such an aversion to ‘socialism’ even in its mildest forms, like universal healthcare.   Every other ‘developed’ country embraced what’s commonly called social democracy decades ago, in the aftermath of WWII, as have other countries. But not the U.S. As far as they’re concerned, it’s socialism.

I used to think that I understood the reason and that surely it would pass. My theory was that it was tied to the Cold War fear of communism and the thought that socialism would lead to communism. I reckoned that once enough time had passed they’d realize that wasn’t the case. However, I have now learned that this aversion to social rights has been at the core of American principles since at least the mid-1700s. That’s what individualism is all about. It explains a lot of things.

Full disclosure: I grew up in the U.S. I was raised out on Long Island in the 50s and early 60s, and our holidays and extended family visits were spent in upstate New York and New England. New England in the 1950s was my ‘coming of age’ setting, in a middle class family that was following the American Dream of doing better than their parents. The American Dream, as I understood it then, meant that everyone had the opportunity to make a better life for him or herself. And the Dream was supported by a solid public school education. Education would lift you up.

I had a fantastic public school education. (I was just a kid. I did not understand that the quality of the schools depended on where you lived, since, at least in New York State, your schools were funded by your property taxes. And, not surprisingly, that the level varied enormously from district to district.) This was during the height of the Cold War; we had air raid drills, hiding under our desks, the whole bit. And there was lots of talk about ‘creeping socialism’, which apparently was something to watch for with vigilance lest we become communist.

When I was in grade 12 (aka 12th grade) our history teacher used the phrase ‘creeping socialism’ often. One day, just as I was thinking to myself, “What exactly is so bad about creeping socialism,” the girl in front of me raised her hand and asked that very question. Well, from the look my fellow student was given it was surprising the floor didn’t open up and swallow her whole. It had to have been the fear of communism. Or so I thought.

I left the U.S. the following year to attend McGill and, as so often happens in life as it unfolds in unexpected ways, I ended up staying in Canada and becoming Canadian. I was reminded of this confusion about ‘creeping socialism’ and communism when my husband and I found ourselves in the Soviet Union (Russia) in 1970. Although the Soviet Union didn’t officially collapse until 1989, their economic ‘system’ had visibly failed by the time we were there. I remember looking at the long lineup of people on the streets of Moscow, waiting to buy onions that were being sold of the back of a truck on a main city street, and thinking, “This is what we were so worried about?!”

However, I now know that this distain for any social rights – education, healthcare, welfare – has been part of the U.S. psyche ever since its inception. I now know that ‘life, liberty, and the pursuit of happiness’ doesn’t include social rights. On the contrary, it means the freedom to lead your life the way you want to lead it, with minimal government interference. Period. This is American individualism.

I swear I never, ever, heard this interpretation growing up. In school we sang “Let there be peace on earth and let it begin with me” and “Give me your tired, your poor, your wretched refuse waiting to be free”. We learned about the New Deal and the newly created United Nations. I didn’t know anyone who had a gun or wanted to have a gun, unless my cousin in upstate New York had one for hunting. Guns were never even mentioned. I never heard the term ‘individualism’. Clearly, I lived in a bubble. Maybe I just heard what I wanted to hear.

Well, my bubble has now been well and truly burst, but at least I understand the tensions in the U.S. better. I just finished reading a book by historian Greg Grandin called The End of the Myth: from the Frontier to the Border Wall in the Mind of America. It’s a tough, tough read. Compelling and well written, but tough. There are quotes from politicians and other public figures from the 1700s, 1800s, 1900s, and the 2000s, and they all pretty well say the same thing. We are building an entirely new country that the rest of the world will look up to. That the rest of the world will envy. That the rest of the world will respect. Land, freedom for all (all meaning white males for as long as humanly possible), and freedom to develop a free-market economy and reap the results will win the day. The strategy for dealing with strife (race, housing, unemployment, etc.), regardless of century until fairly recently, was to open up more land as a ‘safety valve’. Take more Indian land. Then more. Take Mexico’s land with the Mexican-American War. Kill, rape, plunder. Open up the new land to keep (white) people happy and productive. Protect their rights to keep away Indians and Mexicans as they see fit. Protect their right to free markets. Otherwise, leave them alone. 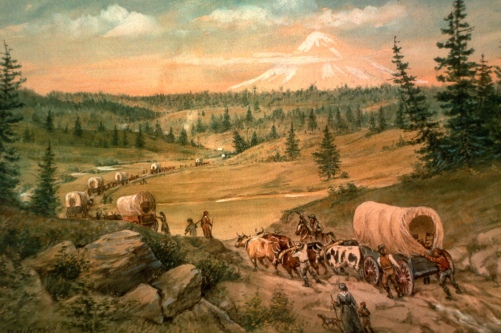 Once these settlers were established on their new land, the last thing they wanted was government interference. The only thing better than minimal government would be no government. That’s the foundation the country grew on, but I never learned that part. Or maybe I just never took it in.

I left the U.S. for Montreal in 1963, just two months before President Kennedy was assassinated. I was in England when Martin Luther King, Jr. and Bobby Kennedy were both assassinated and the U.S. suffered its most horrendous year for American deaths in Vietnam. I was back in Canada when Vietnam was ongoing and when the Kent State shootings occurred, 50 years ago. I was leading a very different life and not taking it all in. The never-ending wars in faraway countries continued, but I have to admit I never took the time to ponder how these recurring tragedies affected the American psyche or how they reinforced or upset the American sense of identity.

I had moved to a country that didn’t seem so different from the one I left – on the face of it. Sure, it has two founding cultures and languages (plus indigenous cultures and languages), which I love and embrace, but otherwise I didn’t think about inherent differences. Of course, I was young and not really focused on these things. But it turns out that they are as different as night and day. The U.S. was founded on the principles of ‘life, liberty, and the pursuit of happiness’, which I clearly hadn’t interpreted properly as a kid – a sort of ‘thanks, government, but I’ll do it my way’ expectation. On the other hand, the British North America Act of 1867 that created the federal dominion of Canada highlights the values of ‘peace, order, and good government’. Talk about a contrast.

Canadians want and expect our government to provide social rights such as healthcare, education, and welfare, and it does. Along with European countries, Japan, and South Korea (and Costa Rica), Canada follows the philosophy of the greater good. This is social democracy. The United States, it turns out, has always placed a high value on individual rights and has been consistently suspicious of social rights. It’s the outlier on purpose.

I’ll never understand this way of thinking. However, now I at least know that it’s not just a misunderstanding of the difference between communism and social democracy that’s keeping the U.S. from adopting social democracy norms. The American dislike for even social democracy is the result of deep rooted values stemming from a country built on a frontier philosophy.

Knowing this long history does help me better understand the current American quagmire of division, discord, and anger. It doesn’t make me feel any better though. The Americans I know are far kinder than an ‘every man for himself’ frontier philosophy suggests. Friends on the outside will live in hope that America can find a way to reconcile its unique individualism with helping each other for the greater good. Surely ensuring others aren’t left behind can only help build a stronger America.

56 Responses to America’s issue with socialism, so that’s what it’s all about