Is guilt a female thing?

I know we all feel guilty about some things some of the time, but it dawns on me that we women truly excel at it. We embrace it. And I’m pretty sure that embracing guilt is not constructive.

I got to thinking about this after reading an interesting piece in the Guardian on the history of focus groups. (OK, I was wasting time and felt guilty about it, but it was an interesting article. Well, more interesting than what I thought I really should have been doing at the time.) It turns out that one of the early focus groups, back in the early 50s, was run by Betty Crocker to find out why housewives weren’t buying more cake mix. Millions of women had gone into the workforce during WW II and many had continued working after the war ended, so it made sense that buyers should gravitate to products that made their lives easier, like using more cake mix (they hadn’t yet figured out just giving up on desserts every night would be even easier). But sales weren’t increasing. So they used this new-fangled marketing tool – a focus group – to try to figure out why. What they found was that women loved the idea, but they felt guilty not making their cakes from scratch, even if the mix would save them time and the result tasted just as good. Do you know what Betty Crocker did with that nugget of information? They changed the mix so that homemakers had to add an egg to the mix. That did it; the lady of the house now felt that she was doing more than just opening a box, and so, by having to add an egg to the mix herself, her guilt diminished. Cake mix sales took off. Betty Crocker just needed to assuage the female guilt first. (Anyone my age will also remember how popular apparently guilt-free Jell-O and pudding mixes became, too!)

In a similar vein, I came across this statement on Facebook this past week that really resonated with me (OK, yes, I felt guilty wasting yet more time on FB, but if I hadn’t been doing that instead of something more constructive I would have missed this quote). 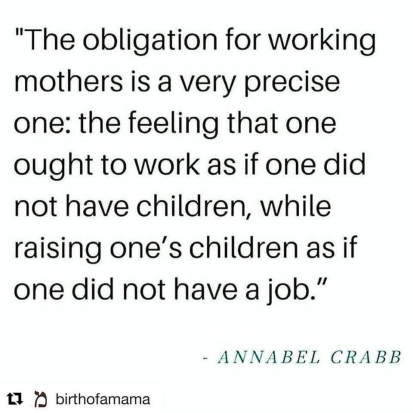 The reality is that women expect way too much of themselves. For the most part this is not an expectation put on them by men, it is an expectation put on them by themselves – or maybe partly by their mother, although that would be because she had the same over-the-top expectations for herself. I’m not sure how we women overcome this, but I sure think it’s worth trying to figure out. I can’t help but think that the guilt gene and the lack-of-confidence gene are related. And they both keep too many women, young and otherwise, from reaching their full potential and feeling good about themselves.

I learned a valuable lesson from a friend of mine many decades ago when we were all in our 20s and the couple we were visiting decided to have a dinner party so we could meet some of their new friends. My friend made a nice meal and then set out a Sarah Lee cake in its aluminum tin for our dessert. At that time, when we were all “perfecting” the skill of holding dinner parties, I would not have had the courage to do this. I might have thought about it wistfully, but I wouldn’t have had the nerve to do it. I’m not even sure if I would have thought it was “allowed”. Heather, who had been at work all day, just breezily explained, “I’d rather use my time to have friends over and enjoy them than spend the time making a fancy dessert.” I don’t know how she developed that wisdom so early, but I took it to heart. News flash: You don’t need to do everything to perfection, and if you think you do then just imagine all the wonderful things you’ll miss out on just because you’ve set your standards for yourself so high.

With respect to not trying something because we don’t think we measure up to our own standards, we find that many young women don’t consider applying for computer science or engineering because their math marks aren’t high enough – according to their own exacting standards. Young men will apply to engineering and CS programs with 65% in high school math and think nothing of it. They’ll think, “I know I can do it, I just didn’t work that hard in high school.” Young women, on the other hand, are more likely to decide against applying because “I only got 80% in math, and I know it’s really hard.” Those are big, life-changing decisions being made with imperfect information on both sides. But it does speak to the continuing evidence that women are too hard on themselves and men often have more confidence than is warranted. Why is this the case in generation after generation and what might be done to change it? I wish I had an answer to these questions.

Women need to be asked – repeatedly – to run for public office. They don’t see themselves in that role. I’ve heard comments like “on average a woman needs to be asked 17 times before she will feel confident in running for office, whereas a man will just assume it’s a good idea and offer his candidacy.” Women have an equal chance at winning once they overcome the lack of confidence in putting their name forward.

Women also need to be asked repeatedly to consider applying for managerial positions. We can envision others in these roles, but not ourselves. It takes others approaching us, more than once, to start thinking that maybe it would be possible. And once moving into these roles, women need to be taught – over and over again – that there is a process for salary increases that men seem to know about instinctively and women have never heard of. The first time I was in a position to negotiate for a change in salary because I was taking on an administrative role, I didn’t even know I was in a negotiating position. I just assumed there was a set salary adjustment and that was it. I was more fortunate than most because my superior mentored me; he told me that I should now be asking for a change in salary over and above what I had assumed. How do men know this in advance? Even having had that advice, for which I was very grateful, and even after having provided similar advice to women coming after me (and I never did encounter a man who didn’t ask for a salary top-up, and only once did I encounter a woman who knew enough to do so), I never got too good at it myself. The last time I negotiated for a salary, when I returned to work for a year, I came in with my ask, having carefully calculated what I thought it should be, and the reply I got was, “Is that all?” Some people never learn, especially women!

If my experience is in any way typical, the good news is that guilt and doubts about ability do lessen to a large extent as you get older. I am happy to report that eventually you just don’t care as much about what people think of you! I sort of say that in jest, but not really. I still feel guilty if I replay what I’ve said or written to someone and wonder if they misinterpreted my meaning and I’ve somehow offended them. I still do that, but not as much. I’m doing pretty well about not feeling guilty about staying in bed as long as I can get away with, and that project is going quite well now that I am retired for the last time. I do feel guilty when I hear my husband washing the pots and pans from the night before while I’m still in bed, but not very (instead I think about how nice he is and turn over and go back to sleep). I feel guilty if I haven’t gotten in touch with a friend or family member in too long a period of time, but that helps kick me into action. These days, my main source of guilt comes from spending far too long each day glued to my mobile device. Happily, I am officially old and retired and can do whatever I want, right?!

14 Responses to Is guilt a female thing?