Have you heard of the Big 5? How about the Arctic Big 5?

For those of you who aren’t big game hunters or haven’t been on an African safari, the Big Five refers to the big African game animals that are considered the most dangerous to hunt (or with whom to have any encounter of the up-close-and-personal kind). Presumably, if you are a big game hunter – and I seriously hope you are not – these five are considered major notches on your belt. Mainly, they are 5 remarkable and awe-inspiring animals: elephants, lions, Cape buffalo, rhinos, and leopards.

What isn’t quite so well known is that there is also a collection of animals known as the Arctic Big Five. These animals have been identified more for tourism marketing than as a draw for non-indigenous hunters. But these animals were certainly in my sights for encounters when we travelled to the Arctic in the late summer of 2015: polar bear, walrus, narwhal (the list often says “whales”, but the narwhal is the one whale you can only see in the Arctic), caribou, and muskox. Aside from the caribou, which you can find further south than the Arctic, these are all hardy animals found only in the Arctic. We were very lucky; we nearly got to see all of them.

Polar bears
We were truly blessed with our polar bear sightings. The silver lining of the unusually late summer sea ice in Prince Rupert Inlet west of Baffin Island (I love that oxymoron-sounding “summer sea ice”) caused challenges for our itinerary in other ways, but it provided the polar bears in the region with a longer season for staying on the ice hunting seals and fattening up. And … because of that, as we slowly sailed through the sea ice, we found lone polar bears on huge expanses of ice the way you’d find lone lions on huge expanses of veldt in southern Africa. 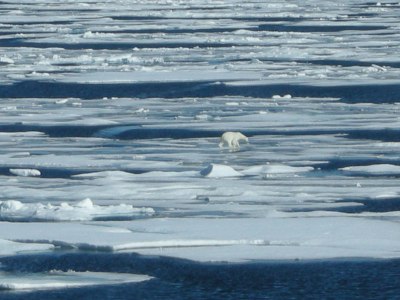 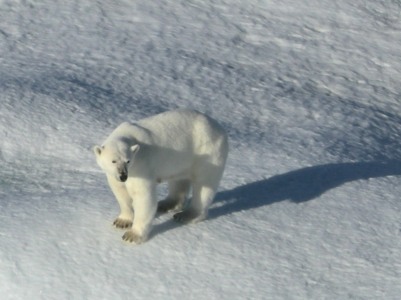 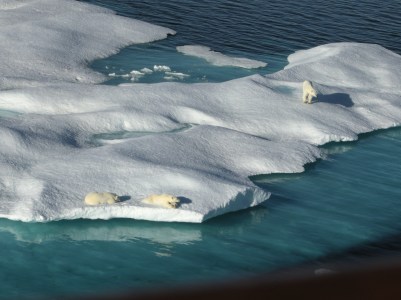 Things you might not know about polar bears:
• Because their diet is pretty well exclusively seal, they are classified as marine mammals, like whales, walruses, seals, and manatees. They need the sea … and they also need the ice.
• Polar bear liver is dangerously, even fatally, toxic! Thankfully, you are not likely to find yourself in a situation where you could inadvertently eat polar bear liver or where you had nothing to eat to keep from starving except for polar bear liver. I’m not sure how indigenous people and later northern explorers found this out – maybe it tastes really awful as well – but it has so much vitamin A in it that it could kill you. Apparently polar bears developed this ability to store an outrageous amount of Vitamin A in their liver so they could keep eating all those seals, which also store vast amounts of Vitamin A. We’re better off staying away from seal and polar bear liver and sticking to broccoli, spinach, and eggs for our daily Vitamin A requirements.

Walruses
We were lucky in our walrus sightings as well. It turns out that usually they are found close to shore, since they feed predominately in shallow waters, but we also had a lovely encounter with a fellow who was having a nice rest on an ice floe. 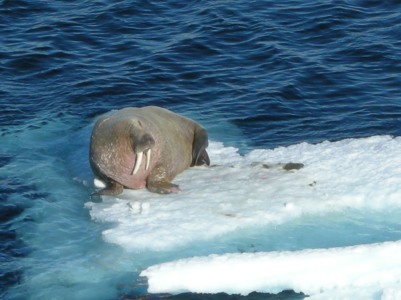 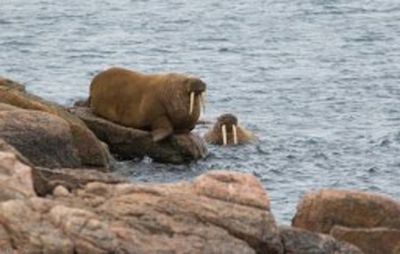 Things you might not know about walruses:
• For reasons known only to them, these huge blubbery animals live mostly on a diet of clams. I have a hard time getting my head around this. It seems that their whiskers and the shape of their tongue and mouth are designed especially for finding and sucking out the juicy bodies of clams and other mollusks on the bottom of the Arctic Ocean. That has to be a lot of clams. Go figure!
• Indigenous hunters in the past would use all parts of the walrus, including using the intestines and gut linings for waterproof parkas and fermenting the walrus’s flippers for a special treat.
• Walrus tongue was considered a delicacy by European hunters and Arctic explorers, as opposed to the rest of the animal.
• Walruses once ranged as far south as Cape Cod and as late as the eighteenth century were found in the Gulf of St. Lawrence.

Narwhals
Many types of whales come to the Arctic in the summer, which is very brave of them considering how many other oceans are available to them and not as cold. Clearly there must be some very good eating. Belugas, killer whales, Blue whales, fins, and others can be found in the waters. However, those can be found elsewhere (although not always easily, and always as an absolute thrill). But Narwhals only live in Arctic waters and I really wanted to see one. Just goes to show that you don’t always get your wish! The closest I came to seeing one was a narwhal that had been hunted earlier in the day in Pond Inlet in Nunavut, at the northwest edge of Baffin Island. Some people from our trip watched a hunter cleaning up the narwhal tusk at the water’s edge. Not me.

This is what I had hoped to see: 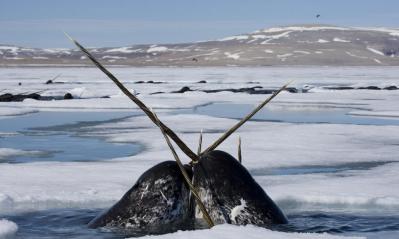 This is what I saw: 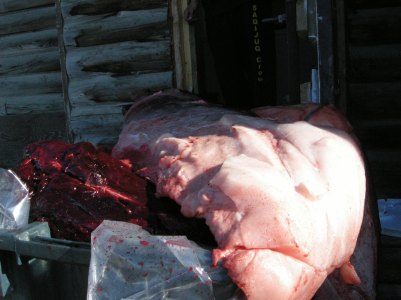 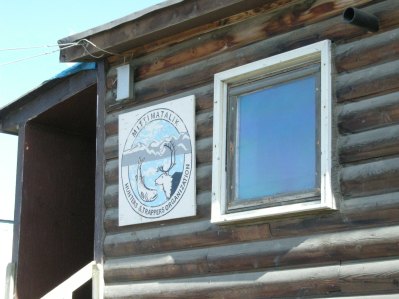 outside the Hunters and Trappers Organization in Pond Inlet

Things you may not know about narwhals:
• They are often referred to as the unicorn of the sea.
• Their very long tusk is actually a canine tooth that protrudes from their heads. Happily for the females, this is typically a male-only affectation. A tusk can be as long as 10 feet on a body that is from 13-18 feet. It’s a lovely spiralled appendage, as inconvenient as it must occasionally seem.
• They can suffocate by being trapped under ice while eating their meals of fish. This seems like an unnecessarily tough feeding environment.

Muskox
We were lucky to get to see a pair of muskox on our very last day of the trip before returning “south”, as they say. We were returning from the Greenland ice sheet to the airport at Kangerlussuaq, a short 25 mile distance of tundra, and came across this pair. The focus isn’t what it might be, but it gives you an idea. 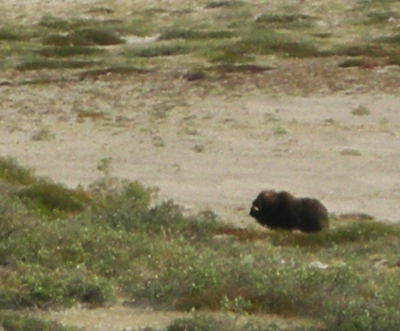 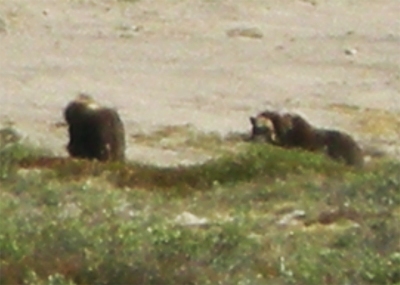 Things you might not know about muskox:
• They are named for exactly what comes to mind when you hear their name, the unpleasant scent that male muskox give off when they are rutting. Apparently, it works for the female muskox!
• Muskox wool is highly prized, which isn’t surprising when you think about the quality of coat one would want if one were to live outside in the Arctic 12 months of the year. It is softer than cashmere, stronger and warmer than sheep’s wool, and does not shrink in water at any temperature. It is also very expensive!
• The outer coat of the muskox is about a half-meter long (~18-20”) and hangs from their belly nearly to the ground. There’s a good reason for this: it’s cold out there.

Caribou
What people really look for when they head north and think of caribou is encountering a massive caribou migration, where the ground shakes and the air thunders with the sound of thousands upon thousands of pairs of hoofs. The caribou migration is one of the world’s largest migrations. We didn’t get to witness this. To be fair, I think you’d have to be somewhere in the interior of Nunavut or northern Quebec at precisely the right time of year to have that special experience, as Jenny Kingsley described in her book Paddlenorth. But we did see a few caribou. Sadly for them, we saw them very close to an encampment of hunters. Good luck, caribou.

What would have been nice to see: 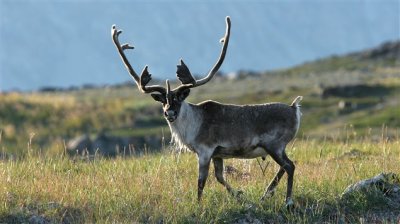 Our very own caribou sightings: 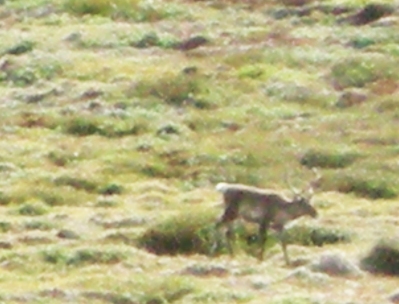 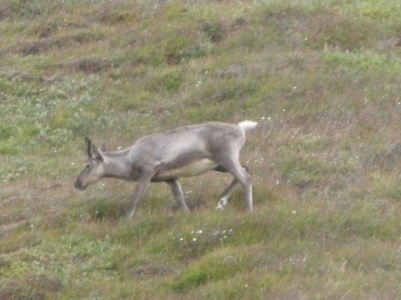 Things you may not know about caribou:
• They’re reindeer! I did not know this, not at all. I was happy to have seen reindeer in Greenland, but sorry not to have seen caribou. But when I googled “caribou” I found that they are also called reindeer. I had seen them after all.
• They’re the only member of the deer family where both the males and females have antlers, although the females aren’t as big and some females miss them altogether.
• A caribou’s favourite food is tree lichen, which is its winter staple. Since it takes hundreds of years for a biomass of tree lichen to be adequate to sustain woodland caribou populations, deforestation is a major factor in the decline of their numbers.

Thinking about their environment
When imagining these wonderful animals in their harsh northern environment, we need to remember that they deal with more than the ice, the snow, and the vicious winds that whip the snow across the landscape and contribute to windchills of unimaginably low temperatures.  It’s also dark – with 24-hour nights – for a significant part of the year.

Current weather for this week, with each day showing a moon because of 24-hour nights!

The pictures and documentaries we see are always taken in near 24-hour daylight, as was our own recent experience in the north. But that’s not the year-round reality. Not at all. The Arctic Big Five exist in extremes of both climatic conditions and of light and darkness.

It was a privilege to have seen them in their native habitat – in the light!

Other posts about our trip to the Arctic:
Exploring the Canadian High Arctic – the lazy way
Greenland – a gigantic ice sheet with a fringe of green

11 Responses to Have you heard of the Big 5? How about the Arctic Big 5?