On Canada Day, why I love Canada

July 1 is Canada Day – every year.  It’s the birthday of Confederation, the date in 1867 on which Canada ceased to be a British colony and become a country in its own right.  On July 1, 1867 this new country consisted only of its four initial provinces: Ontario, Québec, New Brunswick, and Nova Scotia.  How we’ve grown since then!  From 4 provinces in the east to 10 provinces and 3 territories in the east, west, and north (and center, of course).

Canada Day is a very special day to me, maybe because I became Canadian by choice, not by birth.  And being Canadian is something of which I am extraordinarily proud and for which I feel enormous gratitude.

I arrived in Canada in 1963 to attend university and, except for a few years of living in the UK, I’ve lived here ever since.  These are some of the many things about Canada that make it so very special for me:

Canada is not a world power; it understands that it can best make a difference in the world by cooperating and collaborating with others, working together to address human rights issues and humanitarian crises around the world.  And that’s what it tries to do.

Canada is what’s often called a social democracy, like many European countries (and New Zealand and Australia).  It believes in its responsibility to the greater common good.  Like in other countries called social democracies, its citizens enjoy public services such as universal health care, parental leave, equal-access public education, and early childhood programs.  Yes, our healthcare system showed its vulnerabilities during COVID, as was the case in so many countries, but the policy of publicly-funded access to healthcare for all remains strongly supported as we work to ensure it has the resources it needs.

Canadians strongly supports our 50-year old official policy of multiculturalism, which embraces diversity, inclusion, and respect for all cultures.  It’s in our blood, even when we fight it. 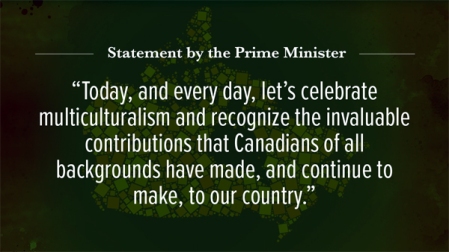 Canada is a country of 3 founding peoples – Indigenous, French and British.  Although the Indigenous peoples and the egregious treatment they faced for so long is a terrible stain on our past – and continuing challenge in our present, the fact that the British colony of Canada was “allowed” to remain French as well as English is a rarity among British conquests, to say the least.  Remarkably, in 1774 the British Parliament, whose armies had forced a surrender of the French settlements in Québec, passed the Québec Act.  This gave Québec the “right” to have French acknowledged as their language and (perhaps even more strangely in those days) Catholicism as their religion.  Presumably, this was done as a matter of practicality, to keep the French inhabitants on side when they themselves didn’t have enough new settlers to change the balance.  Remember, those Brits had those feisty colonists south of the border to worry about at that time! And … despite the many frictions between French speakers and English speakers from time to time ever since, including now, the two languages have held.  French and English are both official languages of Canada.  Ici nous parlons français.

I absolutely love that Canada is at minimum a bilingual country.  And the reality is that, being a country of immigrants, we are really a multilingual country (including 70 Indigenous languages).  And a multicultural country.  And becoming more so all the time.  Many of you may not know, for example, that Canada has the world’s largest diaspora of Ukrainians after Russia, with 4% of our population (1.4M) identifying as ethnic Ukrainians.

Canada has an extraordinary variety of geography, with much beauty and grandeur.  OK, I’ll give you that warm sand beaches in the middle of winter are not part of the mix, but as long as you love winter – which I do – the scope is endless.  From mountains to lakes to vast prairie skies.  From coast (Atlantic) to coast (Pacific) to coast (Arctic).

Canada has elections that seem to make more sense than some other places.  And trusting in your election process is important for maintaining a healthy democracy.  No system is perfect, but our elections are usually held about 6 weeks after the election is called, which can be any time up to and including a 4-year term limit.  Six weeks is it, and most of us think that’s more than enough.  As you can imagine, far less money is involved when there is a 6-week election campaign compared to a multi-year campaign.  Once our candidates are chosen, we all go to our polling stations and put an X on the paper ballots we’re given, which are then counted by a group of volunteer scrutineers from each party.  The counting process is usually done in a few hours.  Recounts, sometimes, but for the most part, it’s remarkably straightforward.  Democracy in action.

Canadians, by and large, continue to have shared values.  We believe in peace, order, and good government (even if we like to complain about what our various levels of government are doing wrong).  We believe in gun control, although some may believe in even more control than others.  The vast majority believe in enshrining rights for our friends, family members, and strangers who are LGBTQ+, because … why wouldn’t we?!  The vast majority support a woman’s right to choose, because we have compassion for the pain a woman (and most often her partner) has to go through to arrive at such a difficult decision in the first place … and, besides, it’s not our business.  These values that I think of as Canadian can perhaps be summed up as egalitarianism (equal opportunity), politeness, and harmony. 🙂

Here’s to my home and native land, my Canada.  Happy Canada Day, everyone!

42 Responses to On Canada Day, why I love Canada