Earth Day, a celebration or a chance for redemption?

Today, April 22, marks 51 years since the world first celebrated Earth Day.  Since April 22, 1970.  Fifty-one years ago we could still convince ourselves that we could get things under control.  We could lessen our use of fossil fuels and reduce carbon emissions, we could plant more trees, we could protect the endangered plants and animals.  We can no longer convince ourselves of that.  We have been appallingly bad stewards of our planet and its natural world; we’ve created a climate crisis of historical proportions in a wink of the eye as far as the history of the planet is concerned.  We have a record number of plants and animals on the endangered and critically endangered lists as we alter their climate and destroy their habitats to establish  irreversible monoculture agriculture (usually in the developing world to feed the desires of the wealthy countries). 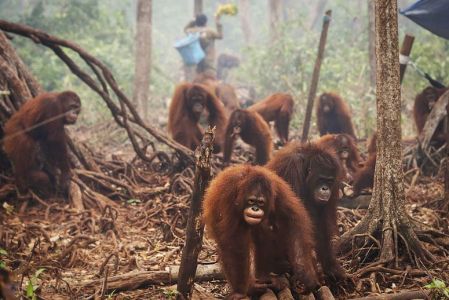 We need to start thinking of Earth Day as a marker for turning things around, within countries, within communities, within corporations, and by individual actions.  We need to use Earth Day to redeem ourselves with Mother Earth.  Celebrating Earth Day by everyone turning out their lights for a designated hour just doesn’t cut it anymore. That’s just patting ourselves on the back that we remembered that it’s Earth Day.

Some reminders of how critical the issues facing our planet are:

On Earth Day this year, let’s all commit to making one significant change in our daily lives that will have a positive impact on our planet.  Eat less meat.  Stop buying bottled water, or any drink in a plastic bottle. Trade in your SUV for a more fuel efficient car, or even better, an EV.  Commit to fewer flights, a huge polluter (much easier during a pandemic).  Plant a tree.  Donate to a reputable climate charity.  Or follow Fredericton’s Earth Day challenge and grab a garbage bag, put on gloves, and go pick up trash around your neighborhood or along your trails.  Whatever works best for you.  But I encourage you to choose something.  We all have a role to play in trying to curb climate change.  Face it, we’ve screwed up!

25 Responses to Earth Day, a celebration or a chance for redemption?