We’ve looked at map projections before on Map Monday.  To remind you, the most common projection – that is, the representation of the 3-D globe on a 2-D map – is the Mercator projection.

There are many reasons for this, starting with its ease of use for navigation on the seas, but as we’ve seen in the past, it badly misrepresents the size of many places.  Interestingly, the winners in unfair virtual increases in size seem to be largely the “western” nations. Nice for Greenland and Antarctica though!

As described in The Conversation’s Five Maps that will Change the World, Boston public schools are shifting to using world maps based on the Peters projection, a first for a US public school district.  Their move is in recognition that the Peters projection accurately shows different countries’ relative sizes. Although it distorts the shapes of the countries, it avoids exaggerating the size of developed nations in Europe and North America and reducing the size of less developed countries in Asia, Africa and South America, as is done with the long-used Mercator projection. What do you think?

The article includes a few different ways of representing the world as a map, including one that has the South Pole at the top of the map and the North Pole at the bottom.  After all, there’s no law of nature that says that north needs to be at the top!

Here’s a world map that defies the convention that the map should be centred at 0 degrees longitude (going through Greenwich, UK).  That long-held approach puts the Atlantic Ocean and Europe front and center.  Here’s a world map that centers the world around the Pacific Ocean instead.  All of a sudden the world takes on a different feel.  Interesting how these seemingly subtle differences have an impact on what we consider important.  Think about it. 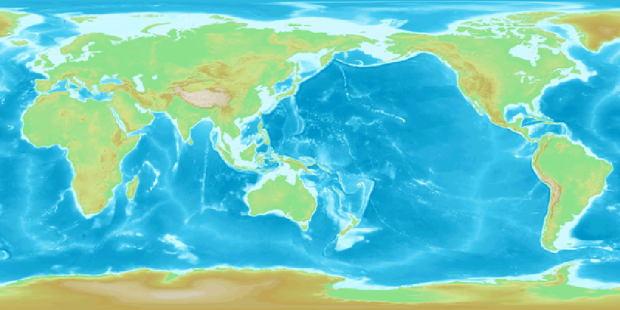 This article led me to a remarkably complete archive of cartograms about all sorts of world facts, at WorldMapper.  I’m going to share a few of them with you just to pique your interest.  Remember, a cartogram distorts the size of a country in proportion to its share of the item/fact/issue being displayed. It’s useful to compare each cartogram to the second one, Total Population.

Girls not in school around the world.

Maps can tell us so many things, in so many ways. And there’s always so much to learn!

20 Responses to Map Monday: more fun with projections and cartograms