I will be posting a tribute to all our soldiers on Remembrance Day tomorrow, but when I came across this sobering historical reality and fine tribute I knew I had to share it widely. These words from Ian Anderson speak eloquently of the brave and patriotic service of thousands of Indigenous Canadian troops who served in 2 World Wars and the Korean War. They also, sadly, serve as a reminder – or possibly a wakeup call – of the shameful treatment of Canada’s Indigenous peoples in so many ways and why the efforts being made now for true Reconciliation are so very important.

From a FaceBook post by Ian Anderson of Temple Scott Associates:
“I was chatting this summer with an Indigenous friend when he mentioned almost casually that his grandfather and his two brothers volunteered for the Korean War – and had to give up their so-called Indian Status in order to enlist. A WTF moment for me. Say again – the three brothers VOLUNTEERED to put their lives on the line for this country and had to sign away official recognition of their culture and heritage? Impossible. So I vowed to do some digging. And I found it was true. And then I decided to post about the special courage of Indigenous soldiers this Remembrance Day.

Some 10,000 Indigenous men and women enlisted to fight for Canada in the two World Wars. But technically you could not call them Canadian – because there was no citizenship for Indigenous peoples during the First or Second World Wars – or during Korea for that matter. While Indigenous peoples in the U.S. attained citizenship and the right to vote in 1925 (partly in recognition for their service in WWI), Canada withheld citizenship until 1960 when John Diefenbaker finally acted.

But that sad information was just the start for me. Of the 4,000 Indigenous men and women who enlisted in WWI, none were provided the post-war benefits available to non-Indigenous vets – land, loans, education. As so-called “wards” of the state, Indigenous veterans were considered ineligible. In fact – and this is beyond callous – information about government programs for WWI vets was usually posted in local Legions. And for most Indigenous vets at that time, the Legions were off limit.

Edith Anderson Monture from Six Nations in Brantford (pictured here in her WWI uniform) is celebrated as Canada’s first Indigenous registered nurse. And she was. But she had to take her nursing degree in the U.S., since any Indigenous person in Canada seeking education beyond grade school was required to give up Status, which she refused to do. So in WWI, as an American-educated registered nurse, she served on the front lines with the American Army Nursing Corps – note the U.S. on her shoulder.

Sergeant Tommy Prince from Manitoba (pictured here with his brother Morris) was the most decorated Indigenous soldier in WWII. In fact he received medals for valour from both the Canadian and U.S. armies. And he received them at Buckingham Palace from King George. After the war – and before he volunteered for Korea – he said he “wanted to show that (First Nations soldiers) were as good as any white man.” And he did. But he died penniless in 1977.

Following World War II, a truly remarkable program was announced for Indigenous veterans. They could be enfranchised! But only if they gave up their Status. It seems just 250 chose to do so. Others did not get the choice. Incredibly some Indigenous vets returned from WWII to discover they had lost their Status as a result of being absent from their reserves for more than four years, a provision of the Indian Act at that time. I know this madness is difficult to believe.

My friend’s grandfather got his Status back in the mid-1950s after the Korean War. He had to apply for it. And five years later Parliament made him a citizen and allowed him to vote. On this the 60th anniversary of Indigenous Canadian veterans being permitted to call themselves Canadians, I would like to salute the First Nations, Metis and Inuit men and women who loved and bravely served this country that was so slow to reciprocate their love. Their greatness – along with the greatness of all veterans – should never be forgotten. And just as they fought for a better world, so should we.” 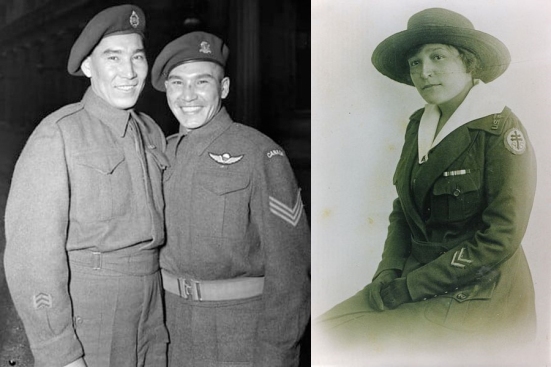