Today is Orange Shirt Day in Canada. Why?

Today, September 30, is Orange Shirt Day in Canada. Orange Shirt Day was inaugurated in 2013 with the goal of increasing awareness of Canada’s history of the indigenous residential school system, a history which is painfully in need of recognition and atonement. Hopefully this event will gain in participation every year and make a valuable contribution to the important path of healing and reconciliation.

I’m not going to go on at length about this shameful history and its legacy. It’s just too upsetting. But I’ll go through it briefly. For 165 years – believe it or not, from the first one opening in 1831 to the last one closing in 1996 – the Canadian government funded church-run boarding schools for indigenous children with the stated purpose of integrating them into our Eurocentric society. Another way of putting this was “to take the Indian out of the child.” When parents came to realize what was happening at the schools and tried to keep their children home, Mounties were actually dispatched to seize the children, however far-flung they were on the land, and forcibly take them to the schools. It was downhill from there. The children were removed from their families, their language, and their culture and beliefs. They were punished for speaking their own language. They had their own clothes removed and replaced with uniforms, their braids cut off, and boys and girls separated so that brothers and sisters were not even allowed to communicate.

Their education was paltry, their afternoons were spent working as the school help, the food was inadequate and nothing like what they were used to, outbreaks of illness were frequent and sometimes deadly. They lacked any caring environment, and beatings and abuse were legend. Slowly but surely, these children, deprived of any love and losing their own sense of identity as indigenous people, lost their connection to their own families. Not so slowly but just as surely, they lost any sense of self-worth as it was hammered into them that their culture was inferior and their people dirty. The impact of the residential schools – in fact, the intended impact – was what has been described by the UN as cultural genocide.

In total, something like 150,000 children went through the residential school system, in schools that for the most part were out-of-sight-out-of-mind to most Canadians. Few non-indigenous Canadians would have even known they existed. The devastating effect of this environment on its survivors (and that’s the operative word) has left many indigenous communities broken for generations. How do you regain a sense of self-worth and learn to be a parent and provide a nurturing environment when you never experienced it? How do you regain your culture, your language, and your traditions, the things that give you your self-respect and help form your identity? How to you cope with the aftermath of the abuse?

This is the enormous challenge that several of the Truth and Reconciliation Commission recommendations strive to address. It’s a work in progress, but steps are being made. Orange Shirt Day is one of those steps.

Why an orange shirt?

Wearing an orange shirt and promoting the slogan, Every Child Matters, is an affirmation of our commitment to raise awareness of the residential school experience and to ensure that every child matters as we focus on our hope for a better future in which children are empowered to help each other.

The symbol of the orange shirt comes from a heart-rending story of the first day of school for 6-year old Phyllis Webstad, who had wrongly thought that going to school would be a good thing. In her own words:

“I went to the Mission for one school year in 1973/1974. I had just turned 6 years old. I lived with my grandmother on the Dog Creek reserve. We never had very much money, but somehow my granny managed to buy me a new outfit to go to the Mission school. I remember going to Robinson’s store and picking out a shiny orange shirt. It had string laced up in front, and was so bright and exciting – just like I felt to be going to school!

When I got to the Mission, they stripped me, and took away my clothes, including the orange shirt! I never wore it again. I didn’t understand why they wouldn’t give it back to me, it was mine! The color orange has always reminded me of that and how my feelings didn’t matter, how no one cared and how I felt like I was worth nothing. All of us little children were crying and no one cared.”

There are many stories like this of children’s introduction to their new schools and living situations, and many are far worse; Phyllis’s personal memory is the inspiration for the Orange Shirt. 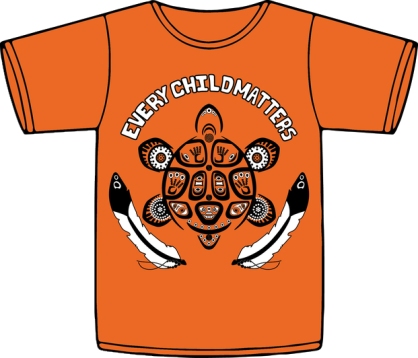 What can we all do, everywhere?

Whether you are Canadian or not, whether you live in another country that will have had similar indigenous residential school histories, like Australia or the United States, or somewhere where indigenous peoples were not part of your history at all, the story of the dominant culture’s (so often the white man’s) treatment of people who are “not like them” will ring true. It’s the never-ending racism story writ large.

What you can do, in particular if you are largely protected from societal abuse because of the light colour of your skin, is stop and think about what these residential school experiences had to have been like for children far away from their home and how you would have coped with life after emerging from such an experience. An experience forced on you by the government of your country.

Stop and think about how all anyone wants – anyone – is to be treated fairly and respected for who they are. To be given the same chance as the next guy. Think about this and then put these thoughts into action every day.

Mother Nature is wearing her Orange Shirt with pride

27 Responses to Today is Orange Shirt Day in Canada. Why?