For most people in the northern hemisphere, Labour Day is the real mark of a new year. School begins, activities resume that have been in recess during the summer, and as summer starts to fade – and the glorious colours of fall make some initial overtures – we settle into a more scheduled pace of life, with great hopes for the new ‘year’ ahead. Well, of course, this year is a little different. Depending on where you live, kids may or may not be going back to the classroom. Favourite activities such as club meetings, recreational sports, and weekly card-playing may or may not be possible. I hope for your sake that some kind of return to normality is possible for you. Some vestige of normalcy at least … while you are staying safe.

We’re having a fair bit of luck that way in our neck of the woods. Earlier this week my husband went to the first fall meeting of our local Photography Club by signing onto Zoom after supper. Maybe not face to face, but it was still a welcome return to an engaging social activity. Yesterday, the reading group I belong to held its first face to face meeting since February, meeting in the social room of the apartment building of one of our members, where we could be together but socially distanced. No food, masks mandatory, and complete wipe-down of chairs, tables and everything else we’d touched when we left, but it was a very positive return. And, getting to the point of my topic today, next week the philosophy discussion group I belong to, which met by Zoom in March and April, will return to face-to-face meetings in another meeting room in town where we can be socially distanced, again wearing masks and wiping everything down and locking up when we leave. Where there’s a will there’s a way!

If you’re wondering where the meaningful life of the title comes in, the resumption of our philosophy group is the key. The topic that our group has chosen to explore this term is: how to lead a good life. And we’re starting our discussions by reading the classic book by Viktor Frankl, Man’s Search for Meaning.

For those of you who don’t know (and I didn’t), Viktor Frankl was an Austrian psychiatrist and neuroscientist (and Jew) who spent the war years 1942-45 as a prisoner in Auschwitz and Dachau; his wife, parents, and brother all perished in the Holocaust. He wrote this short but powerful book immediately after his liberation at the end of the war, pumping it out in a 9-day period and originally publishing it anonymously. Since being published in German in 1946 it has been republished several times, in many languages; it is considered one of the most influential books of the 20th century.

And his message throughout, while describing life in the concentration camps – with such unbelievable human suffering and cruelty – was his theme of being able to survive anything if you have meaning in your life. It had been his theory as a psychiatrist in Vienna prior to the war and remained his life’s work. His experiences in the German concentration camps only solidified what he had already determined: our primary motivation in living is not pleasure, but the discovery and pursuit of what each of us finds personally meaningful. Think about it

I expect that this term’s philosophy topic may well inspire the occasional blog post as we delve into the subject more fully. Today I offer you some early food for thought by sharing the following quotes relating to a meaningful life. 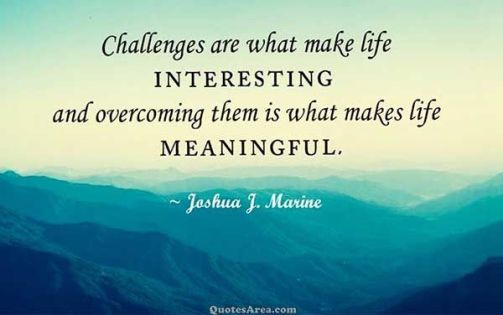