Map Monday: looking at the history of maps

Thanks to a suggestion from a kind reader (thanks, Karl), today we’re going to take a quick trip through the history of world maps.

Stop and think about it for a minute. As I’ve tried to show through past Map Mondays, mankind has been exploring beyond their local boundaries for not just centuries but millennia. There’s the known travel and trade routes of early Asians and people in the Middle East, of course.  As well, archeologists are coming to realize that even indigenous peoples in the Americas had long-ago trade routes with one another over a distance of at least a thousand miles, including between North America and Meso America, trading desirable goods unique to each other’s location and sharing cultural practices. And they sure didn’t have maps. No satellites, no GPS, no maps.

We’re used to living in a time where the features of the world are well known and where information about all parts of the world are readily available. We’re used to being able to find a map online at a moment’s notice or just pick up our personal GPS. But what about the explorers who set out into the unknown, with nothing but the stars, a few rudimentary instruments, and notes from previous ship’s logs to guide them? Or the travelers and traders who had the stars and the stories and advice of those who had travelled the route previously as their guide. They didn’t know what they didn’t know! Wow, talk about challenges.

At some point, a few people got the idea of trying to diagram the far reaches of their world. Some were mathematicians and so tried to use some geometric principles to put accuracy into their drawings. That can’t have been incredibly successful, but it was a start. It was an intriguing challenge. And as exploration heated up, obviously having the most accurate maps would provide a considerable advantage to those ships and the country that sponsored them. Let the map-making competition begin.

The oldest known map of the world is thought to be dated from 600 B.C. It’s a damaged clay tablet discovered in the late 1800s in Sippar, Iraq, and is now housed in the British Museum. It depicts an early interpretation of the layout of the world. At 122 x 82 mm, the small map gives us a glimpse into how the Babylonians viewed the world around them, both physically and spiritually. Babylon, maybe not surprisingly, is at the center. 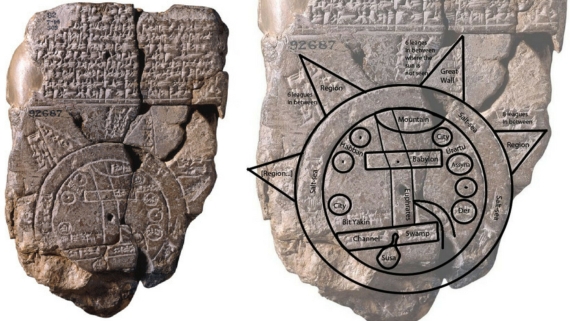 150 A.D. Ptolemy’s First World Atlas. Claudius Ptolemy was a man of the world: a citizen of Rome who lived in Alexandria, Egypt and wrote his scientific texts in Greek. He was not only a geographer but a mathematician, astronomer, astrologer, and even a poet. In his work Geographia, written about AD 150, Ptolemy described and compiled all knowledge about the world’s geography in the Roman Empire of the 2nd century. No original maps from Geographia survived, but this oldest recreation was reconstructed in the 14th century according to Ptolemy’s map projections and locations. 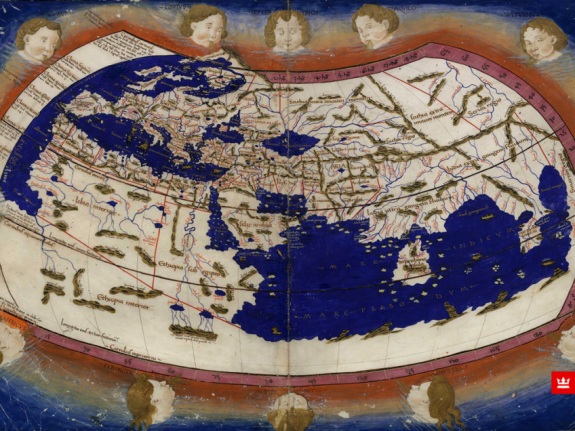 1154. al-Idrisi’s Tabula Rogeriana (Book of Roger). This book of maps was made by cartographer Muhammad al-Idrisi of Palermo, Italy for King Roger II of Sicily (I definitely never knew there was a king of Sicily named Roger!). It included a world map with many regional maps, created from travelers’ and merchants’ accounts. This is a big step forward from most maps until then, which had largely been based on the Bible! Not surprisingly, even moving on from being based on the Bible it’s not overly accurate, but compared to any other maps at the time, its depiction of Europe and North Africa is recognizable. Impressive.

1375. Abraham Cresques’ Catalan Atlas. Abraham Cresques was a 14th-century Jewish cartographer from Palma, Majorca. In collaboration with his son, Jehuda Cresques, Cresques is credited with the authorship of the celebrated Catalan Atlas of 1375. This atlas of maps was based on ships’ logs, and is very accurate in those areas where distance and directions were well known (as opposed to places where they were not!). For areas much removed from the Mediterranean and a few other familiar places, it relies on hearsay and guesswork. Not perfect for traveling!

1489. Henricus Martellus World Map. Martellus, or Heinrich Hammer, was a geographer and cartographer from Nuremberg who lived and worked in Florence from 1480 to 1496. A milestone in depicting the Old World, Martellus’ map used sources like Marco Polo’s travels in Asia and Bartolomeu Dias’ first circumnavigation of Africa. Christopher Columbus probably used this map as he planned his first voyage across the Atlantic in 1492. Martellus’ map represents much of what Europeans knew about geography as they set about on their explorations of the New World, and it’s packed with text historians would love to read—if only the faded paint and five centuries of wear and tear hadn’t rendered most of it illegible. 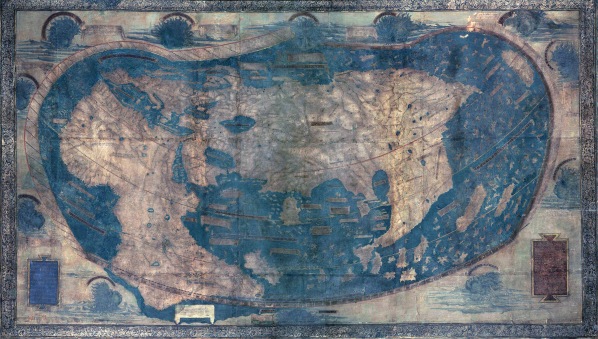 1529. Diego Rebeiro World Map. The Spanish Crown’s official and secret ‘master map’ was updated by Spanish explorers under penalty of death. Based on an enormous number of ships’ logs, it covered most of the world’s coasts. Charts at the time were based on port lists and dead reckoning from a few fixed positions, ignoring curvature and magnetic declination (which I would have undoubtedly ignored as well!) and were not well suited for merging into a larger map. Diego’s map accurately delineates the Central and South American coasts. It’s considered by some to be the first scientific world map. The map shows, for the first time, the real extension of the Pacific Ocean and the North American coast as a continuous coastline. Areas explored by non-Spanish such as Northern Europe and North America, are depicted ‘fancifully’.

In 1589 Elizabeth I requested that Wright carry out navigational studies with a raiding expedition to the Azores to capture Spanish galleons (not the most upstanding mission from which to produce a map of historical significance). The expedition’s route was the subject of the first map to be prepared according to Wright’s projection, published in 1599. That same year, Wright created and published the first world map produced in England and the first to use the Mercator projection since it was introduced by Gerardus Mercator’s in 1569. Wright perfected the 1569 Mercator projection, which takes the world’s curvature into consideration (and makes Greenland look so big and Africa look less imposing in size than it is). Wright’s map data was still approximate, but displayed consistently and realistically. Features newly discovered (by Europeans; they were of course well known to local residents!) included, Spitzbergen (now Svalbard), the Davis Strait, Japan, and the Amazon. 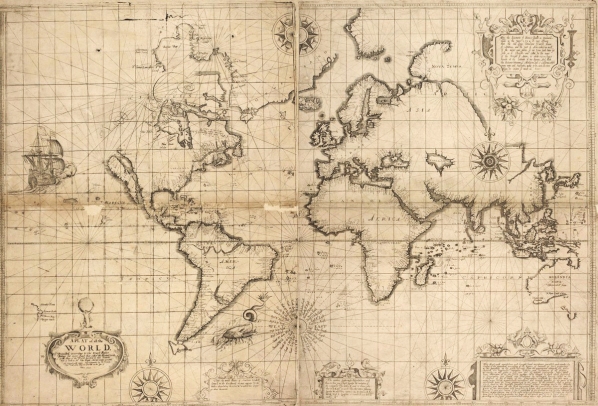 The invention of the marine chronometer in the 1760s allowed ships to correctly determine longitude for the first time ever, making the details of this map pretty darn similar to maps we have today, except for details not known at the time. Although parts of the world remained unexplored and so data for some coasts remained elusive, this was the first ‘modern world map’. We’ve known how to produce a reasonably accurate map (of what we know) since 1778! 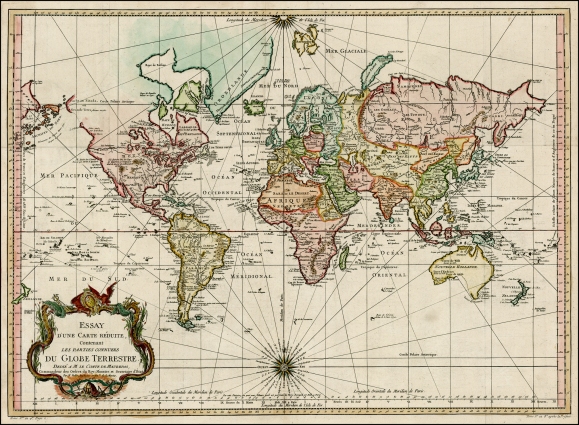 Adolf Stieler was a German cartographer and lawyer who worked most of his life in the Justus Perthes Geographical Institute in Gotha. His Hand-atlas was the leading European world atlas until the middle of the 20th century. In this second edition of the world map, only unexplored Polar are missing or depicted inaccurately, while the rest of the world’s coasts are reliably positioned. Details are of course also missing for unexplored continental interiors. By this time, the ships’ instruments were so accurate that a single journey could provide good maps of new coastlines and rivers as they explored them. Can you imagine what a difference that would have made to the Vikings or Columbus! 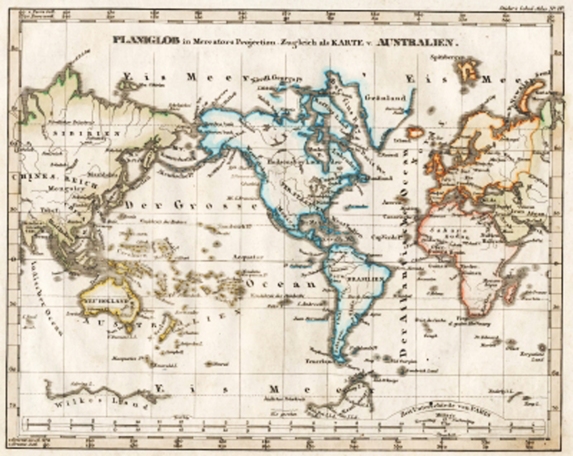 Thanks to this early work of these cartographers, to the explorers’ courage in sailing on tiny sailing ships to the unknown, and to mankind’s innate curiosity, we’ve been blessed with an excellent foundation in mapping. We’ve gone on to exploring outer space and getting back home again (a continual mystery to me) and being able to rely on our GPS to tell us where to turn next (usually). We’ve mapped large swaths of the topology of the Moon and Mars. We’re now able to map hidden architectural remains buried underground by using new Lidar technology and map the depths of the ocean floors using sonar, Lidar, and satellite altimetry. Pretty darn astounding. The frontiers of mapping seem to have no bounds.

2 Responses to Map Monday: looking at the history of maps