Here it is, Map Monday, and I thought for this week I’d steer clear of the pandemic sweeping our lives and our world. The multifaceted crisis this pandemic has unleased is challenging our healthcare systems, our economies, our education systems, and the social interactions that bind us together. But, when these trials are eventually resolved, we will still have all our previously existing characteristics, quirks, and challenges. Let’s look at a few of them today … through maps.

Population distribution. We’ve looked at a few different approaches to illustrating the astounding variation in population density through maps in past posts; here are two others, just for fun. Don’t worry, nobody is considering jamming us all together, at least not at this point in time. And definitely not in the immediate aftermath of lessons learned from pandemic spread. 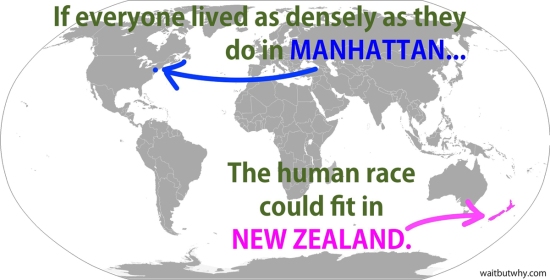 Lactose intolerance. Aside from the increasing pressure on people to drink less milk because of the methane dairy cows contribute to climate change, most of us have always known some people who simply can’t digest milk or milk products very well. They are lactose intolerant. In fact, most frequently that is a trait inherited through your ancestry. Those people whose ancestors through the millennia were cattle, goat, or reindeer herders, and for whom milk was a prime contributor to their diet, evolved to be lactose tolerant. Nearly everyone whose ancestors got their protein – and calcium I assume – from other sources did not need to evolve to be lactose tolerant. Hence, the distribution of lactose intolerance is very widespread. Milk lovers like me are in the minority worldwide.

This first map shows the percentage of people in each country who are lactose intolerant. Take a look, but bear in mind that many of our countries are far more heterogeneous than they used to be, which makes this map a bit misleading. 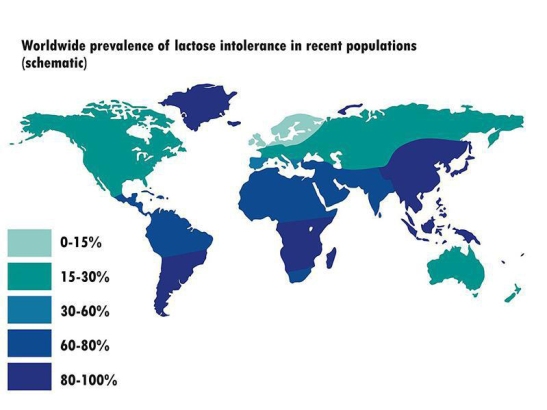 This second map shows a somewhat clearer picture of the mix of ethnic – or ancestral – backgrounds in each country. It uses the term “white” to refer to the descendants of the herders and early farmers who started drinking their animals’ milk long, long ago,  primarily found in Northern Europe and Russia, hence these descendants are most likely to be lactose-tolerant. The main reason I included these maps at all were because, first of all lactose intolerance is a fairly neutral topic and we could use of those these days. And also because it seemed like a good example to remind us that maps can be quite misleading when they’re done on a country by country basis. Take a look at both maps and see if you can tell from the second map why the country percentages in the first map are as they are.

This first map shows what parts of the world have sufficient fresh water resources for their needs (and wants) and which parts do not. Notice that a country may have some areas with sufficient water supply and other areas with severe water shortages. If this map were just showing the overall measure of water supply per country, within-country challenges would not be obvious.

This second map shows how much water is consumed per capita (per person) in each country. You have to keep in mind that this includes showers, washing machines, car washes, swimming pools, agriculture (this one is huge, apparently even keeping beef cattle watered takes huge amounts), construction, watering golf courses and green lawns, you name it. Notice the difference between how much water countries consume (map 2) versus how much renewable fresh water they have available (map 1). Some of them should be pretty worried.

Water footprint per country.  Dark red countries have the worst footprints – between 2.1 and 2.5 million liters of water per capita each year. Image credit: treehugger.com

16 Responses to Snapshots of our complex world using maps