Runfessions: Time to hang up the sneakers

In August I was full of both resolve and expectation. True, it hurt when I walked, but hardly at all when I ran. I committed to a few 5K and 10K races, and had 10 wonderful weeks this past summer spending time jogging along my hometown trails. Sure, in the back of my mind I wondered if it was really OK to keep running when walking was becoming increasingly uncomfortable, but what the heck. Whatever was wrong didn’t seem to bother me much when I was running.  However, the day after my first race in September (really a fun run rather than a race), the annual Terry Fox Run, my head won out over my heart – or maybe it was the ensuing pain that won out. At any rate, I knew it was time to go for full-time rest for a while. Now, after nearly two months of full-time rest I realize that this is more than just the usual running injury. It’s more of a “now I see why so many old(er) people walk with a limp” situation. It’s time to stop dwelling on when I can start running again. Instead it’s time to think about how fortunate I’ve been to have been able to have the past ten years of running. What a ride it’s been! 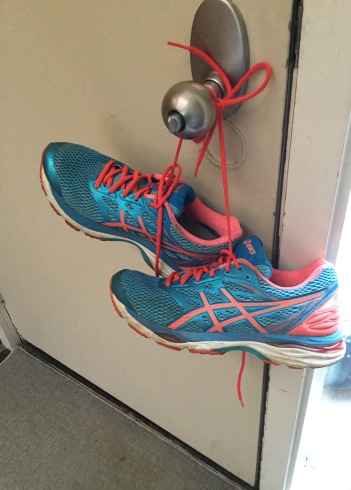 I started running longer distances just over ten years ago, as my heavy work schedule was coming to an end. I was blessed to have two of the most important people in my life join me on this journey, my husband and my brother, as well as our personal photographer and traveling companion, my sister-in-law.

Our initial goal was to try a half-marathon, so we went whole hog and registered for the Disney World Half Marathon in January 2010. I was just turning 64 and my husband had just turned 70. Yikes, we didn’t even think about that. We trained and we trained. We read book after book and article after article about training programs, rest days, cross-training, to stretch or not to stretch, staying hydrated, and on and on. It’s a culture unto itself. We were hooked.

In the past ten years we’ve done half-marathons in Disney World (on what had to have been the coldest January day Florida had ever experienced, complete with sleet and black ice), Ottawa several times, Moncton, Fredericton, and Saint John in our province of New Brunswick, and the Royal Parks Half Marathon in London. We completed the New York City Marathon (my personal favourite running experience) and the Chicago Marathon. And we’ve done numerous 5Ks and 10Ks, including one in Toronto that included 8 family members and one in Hamilton, Ontario that included 5 family members. As I said, it has been quite a ride. 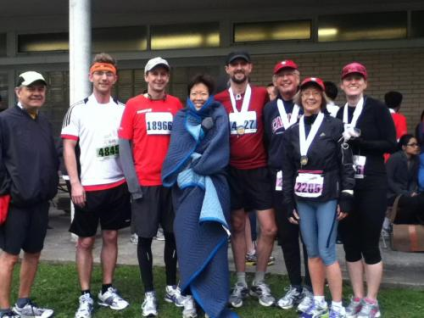 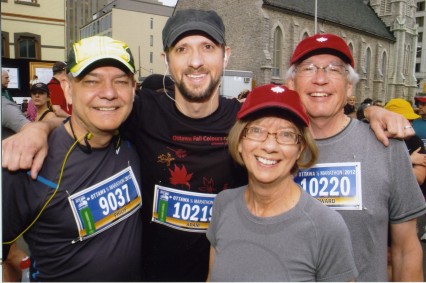 Younger son joins us for a half-marathon in Ottawa. I think he’s since decided that once was enough!

And so, as I hang up my sneakers on running, I am ever so thankful for having had these experiences. I am grateful that I will always be able to recreate in my mind the feeling of peace and well-being found in running along our beautiful trails, not thinking about anything in particular, simply moving. I have learned at a late age that your body really can do amazing things when you put in the effort, and when you train smart. I’ve learned so much in that regard. Don’t overdo, but don’t pretend you’re keeping up with your training schedule when you’re not. Don’t train injured. Rest and ice (and lots of ibuprofen) really do work for injury recovery in nearly every case. Until they don’t. That’s when you need to stop. 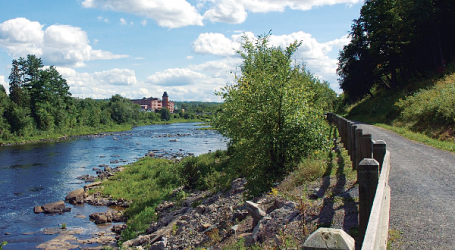 Peace and tranquility on a section of our local trail system

I’ve learned the joy that comes with achieving a tough physical goal, which is something that I hadn’t had a lot of previous experience with, to say the least. Crossing that finish line is an awesome, awesome feeling. Nobody could have described it to me; I had to feel it for myself. And, for anyone who’s thinking of giving this a try, remember that every single person who crosses the finish line is a winner. They got up, put on their sneakers, and gutted it out. Bravo.

I’ve gotten to travel to some very special places for many of our races, fitting in wonderful holidays around destination runs. And I’ve gotten to share all of these experiences with people near and dear to me. It doesn’t get any better than that.

Running isn’t everyone’s cup of tea, especially not as a retirement activity. But it has provided me with benefits I couldn’t have imagined when we started. I encourage everyone to find whatever it is that gives you similar pleasure, and then make sure you get out and do it while you can. You’ll be glad you did!

39 Responses to Runfessions: Time to hang up the sneakers