From fall colours to citizenship, so much to be thankful for this Thanksgiving weekend 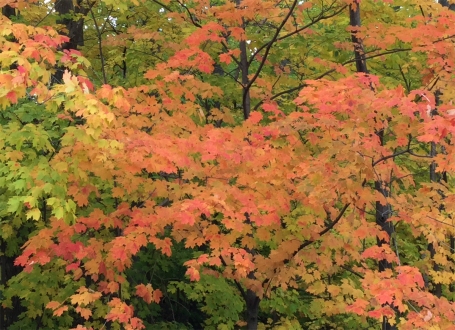 Trees outside my kitchen window, my favourite fall leaf colour

When I was growing up in the northeast of the U.S., they weren’t kidding when they sang, “Now is safely gathered in, ere the winter storms begin.” In the northeast it was cold and dark at the end of November for American Thanksgiving, and the leaves had long since fallen. Having Thanksgiving come on the second Monday of October brings us the very best of fall in eastern Canada. The spectacular colours around each turn and the mild weather in the mid-teens (60s F) are more than enough to be thankful for. 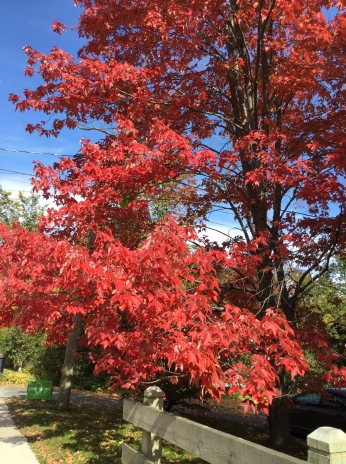 Tree at the front of our driveway, not a bad runner-up for first prize!

But an event we attended yesterday reminded us that we have something more to be thankful for. Something to add to our list of wonderful family, friends, and colleagues for whom we are enormously and eternally thankful. Something to add to the joy of fall colours and lingering mild weather. Yesterday we had the privilege of attending a citizenship ceremony, which took place in the auditorium of a local high school. An auditorium full of families and friends gathered to watch 61 people from 21 countries become some of Canada’s newest citizens. Sixty-one people from 21 countries. In this one part of our small province, with no major centre of population bigger than 70,000. Think about it. Think about the range of life experiences that brought them to Canada, a country with some pretty challenging winter weather, far away from most of the countries they came from. Far away from the first languages many of them spoke. Far away from war and persecution that some of them fled. There were families with small children, early-career professionals, and some older folks. And here they are in this little corner of the world, a corner hardly on the radar for most people, building new lives and adding richness to the character of our region. We are blessed to have these new citizens. Not a single person in the audience or in the group of new citizens had anything but a big smile on their face throughout the ceremony, well, except for one or two squirming babies! And most of us in the audience spent a fair bit of time dabbing at tears of emotion. I sure did.

Those of us for whom citizenship is a given don’t stop to think about the enormity of citizenship. It allows us to fully participate in the society in which we live, to vote, to get involved and even run for public office. To have a voice.  It allows us freedom of movement – depending of course on where you’re thinking of traveling to. It provides us with an anchor, it provides us with an identity.

I should explain that the reason we were attending this citizenship ceremony was to watch one of our community’s Syrian families gain their citizenship, a family I have gotten to know well over the past few years. They were four of the 25,000 Syrian refugees who were the first arrivals to Canada after the Trudeau government changed the policy of the previous government and opened our doors to the refugees, 300 or so of whom have settled in our part of New Brunswick. They are a family who had had to flee their home and their country 6 years previously and had been living as refugees in Jordan. A lovely family with two delightful, smart, busy young children. It is a joy to be able to say that they are all well on their way to making their new self-sufficient lives in Canada, a place very far away from war-torn Syria. Even more war-torn this week, very sad to say. 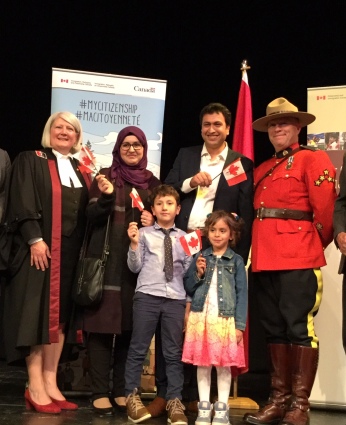 Sitting in the high school auditorium yesterday, seeing my Syrian family and the other new Canadians in front of me, all proudly clasping their Certificates of Citizenship, I thought of my own Canadian Certificate of Citizenship, granted nearly 50 years ago. As our Thanksgiving weekend approaches, I am very, very thankful that I made that decision way back then and that Canada granted me the privilege and responsibility of Canadian citizenship.

Happy Thanksgiving, everyone! And enjoy every day of fall, one and all!!

P.S. Fellow Canadian citizens, don’t forget to exercise your right to vote on October 21. There’s nothing more important. Let your voice be heard.

24 Responses to From fall colours to citizenship, so much to be thankful for this Thanksgiving weekend