Canada is in the midst of an election (of 6 weeks duration rather than 2+ years) and as most people know, our prime minister, Justin Trudeau, has gotten himself into an unwanted controversy due to some pictures of him in ‘brownface’ and ‘blackface’ that have emerged from some 18+ years ago. Many people have lamented the fact that the media – and many politicians – have not used this situation to engage in a more fulsome public discussion on racism and broader discrimination, as opposed to dwelling on Trudeau’s lack of judgment at the time. It’s a missed learning opportunity.

In an opinion piece on September 21, Mayor Naheed Nenshi of Calgary does an impressive job of presenting the realities and complexities of continuing broadly-based discrimination in Canada – with parallels in many other countries. Such an impressive job, in fact, that I thought it worthwhile sharing as widely as possible. Interestingly, Mayor Nenshi’s opinion piece was published in an American newspaper, the Washington Post, rather that a Canadian one; it can be found at: I’m Calgary’s Muslim mayor. We can learn from Trudeau’s ‘brownface’ moment.  I’m reproducing the article in its entirety below because experience shows me that readers don’t always click on links in blog posts, as well-intentioned as they might be! As Mayor Nenshi says in the article’s tag line, Canadians – and Americans – can’t just stand up for our values when it’s convenient. Have a read. 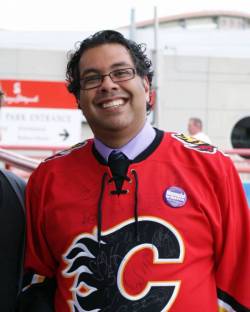 When I saw the picture, it was like a sucker punch. But there it was, smack in the middle of the Canadian election: My prime minister, dressed up in some sort of Orientalist “Arabian Nights” get-up, his face and hands darkened, that smile the same today as in the 18-year-old photo.

Let’s dispense with the obvious: Yes, it was a stupid thing to do, as much in 2001 as now. No, he’s not a racist. Yes, he’s done incredible things for pluralism at home and abroad. He’s apologized honestly and acknowledged how his own privilege blinded him to the impact of his actions on others. No, we don’t need to demand more penance from him. Yes, he should have come to this self-awareness much earlier, particularly as a then-29-year-old teacher who also happened to be the son of a former prime minister. No, he shouldn’t resign over this; he deserves to be judged on the totality of his record and whether Canadians believe in his ability to do good in the future.

But this tawdry incident highlights a much more important conversation all Canadians — and citizens of all liberal democracies — need to have.

Justin Trudeau and I are the same age. He was born when his father, Pierre Trudeau, was prime minister, growing up at 24 Sussex Drive, Canada’s version of the White House. I was born six weeks later, my father and pregnant mother having recently immigrated to Canada not long after Trudeau père announced, in a statement to our House of Commons, that multiculturalism would be Canada’s official policy.

Justin’s and my upbringing were quite different, but we both grew up in a Canada that defined itself by opportunity: a place where a poor, first-generation kid could get a great public education, work hard and do well in his career, supported by a community with a stake in his success. Like the son of a well-to-do prime minister, he can even be elected to public office.

When I was elected as Calgary’s mayor in 2010, I suddenly became well known beyond the boundaries of my beloved hometown. It surprised me. I thought people might want to talk about my come-from-behind win, or how a wonky professor with little name recognition beat better-known opponents. But all anyone wanted to talk about was my faith: How did a conservative municipality known for cowboys, rodeos and hosting the 1988 Winter Olympics end up with the first Muslim mayor of a major Western city?

I was surprised. My faith was not an election issue. It rarely came up, and when it did, citizens protested. He grew up here, he’s one of us, they said on call-in shows. We don’t care that he fasts during Ramadan, we care what he thinks about public transportation.

I could have waved those questions away, but I felt there was an important story to tell. A story of Canada as a multicultural utopia, as a place that has long understood that everyone who shares this land deserves dignity and the chance to be the best they can be. I still believe that.

Even in Canada, people of colour (or color, if you prefer) don’t quite live in the same world as others. We sometimes have to work a little harder, we have to prove ourselves a little bit more, we have to put up with occasional irritations. But it’s part of the deal to live and have great lives here. And we’ve got jokes to help us sort through awkward moments: Go back to my camel, you say? I don’t have one. It’s 2019! I use a camel-sharing app!

I guarantee you there were people at parties in Calgary and in your town this past Halloween who darkened their faces for costume. Heck, I’ve even seen pictures of people dressed as me (despite my annual public service announcement that “Sexy Mayor” is not an appropriate look). The folks dressed like me are generally fans. They’re certainly not racists. And “brownface” (is that even a thing?) doesn’t have the moral weight and historical baggage of blackface. Does it?

Someone who is seen as an ally can still do senseless things, however. Even in my amazing country, we don’t always know who really gets it, and who, despite their best intentions, still isn’t quite there. And in the past half-decade, something has shifted. Here in Canada, the home of the Global Centre for Pluralism, a nation where our innovation and defense ministers both wear turbans, where another minister is a refugee from Afghanistan and where, during the Syrian refugee crisis, political parties supported taking in more people, something isn’t quite right.

It’s become easier to be careless with our language and comments, both online and in line at the coffee shop. In the run-up to the 2015 federal election, the incumbent [previous] government flirted with haters by pledging to ban face veils at citizenship ceremonies and promising to institute a “barbaric cultural practices” snitch hotline. Canadians, in their way, responded by reporting, My neighbor wears socks with sandals! I saw someone eat Thai food with chopsticks instead of the correct spoon and fork! That government was defeated.

Yet in this year’s election, we have a (hopefully marginal) political party vowing, “Say NO to Mass Immigration” and accusing politicians of promoting sharia law. (Neither of these things exist in Canada.)

Jagmeet Singh, a lawyer, is running for prime minister as leader of a national party but, because he wears a turban, could not serve as a judge in Quebec. I, as a Muslim man, could hold any job I want, but under this law, a Muslim woman who covers with a headscarf cannot. Muslim men who wear long beards could claim it’s just a nod to hipster-dom, and be free and clear, but Orthodox Jewish men with the same beard or a yarmulke cannot. Montreal’s mayor can hold any role, but the leader of her opposition, who wears a kippa, cannot. They’ve stood together against the law.

It’s all flagrantly unconstitutional, but the province of Quebec used the “notwithstanding clause,” a constitutional override provision (ironically, like multiculturalism, a gift from the tenure of the first Prime Minster Trudeau) to protect itself from legal challenge.

What’s funny about all of this is that various national leaders have mumbled platitudes about how much they dislike this law, but also haven’t committed to doing anything about it — including the candidate who wears a turban. Conservative Party leader Andrew Scheer leans on the notion of “provincial jurisdiction” in a way that echoes of the language of “states’ rights” in the United States.

Even though the federal government could restrict Quebec’s financing or use its legal power to enjoin the provincial legislation, our federal leaders so far haven’t demonstrated the courage to do so. They’re hardly even talking about it. The law is popular in Quebec, and among others in the country, too. In an election year, they must be thinking, why risk losing those votes?

I‘m grateful every day that I’m Canadian — that my parents chose this country on the other side of the world. There’s no better place to have these conversations. But we have to have them.

We cannot stand on moral high ground calling out leaders for offensive things they did, years ago, if we’re not also willing to stand up against the racist and discriminatory behavior that’s right in front of our faces in 2019. We cannot choose our values a la carte when they benefit us — we need to be all-in, all the time.

Canada, like any other country, isn’t black and white. It’s many-hued. Sometimes, it’s brown. We’re a welcoming, diverse country, but we recognize that we have work to do. Now, let’s use Justin Trudeau’s old blunders to think about the links between individual action and real justice.

This entry was posted in History and Politics, Leadership. Bookmark the permalink.