Boy, these days we really are not seeing mankind at its best, especially in politics. Maybe outside the news cycle there are some uplifting stories and signs of hope, but if so, sadly, it’s not coming from inspiration from most of our leaders. Or is it?

A few weeks ago was Fall Convocation at my university, the University of New Brunswick (UNB). I’m sure there were fall convocation ceremonies at post-secondary schools all around the continent. And I’m sure that the new graduates heard words of wisdom from convocation addresses at nearly all of these ceremonies. But none of them could have been more sincere or compelling that the addresses shared with our newest UNB graduates. These are the kinds of stories that inspire and hopefully encourage our young graduates – our future – to find their own path to making our world a better place. And if they choose to do this through politics, let’s hope that they insist on a new, positive, trustworthy and transparent approach that is truly focused on the public good. Such a change would indeed help make our world a better place.

I’m not only borrowing this blog post title from Mahatma Gandhi, I’m also lifting it from the title of one of two heartwarming convocation addresses I listened to at our recent Convocation (merci, Gaëtan). And along with the two deserving honorary degree recipients on our campus, Gaëtan Thomas and Nancy Strickland, we also heard remarks earlier that day about and from our Chancellor Emeritus, Dr. Richard Currie, who was being honoured for his extraordinary financial contributions to UNB, as well as his gifts of time and wisdom. The themes of the remarks and the personal stories of all three being honoured were similar: a good education is the foundation to a good life and a good life is one that is purposeful, one in which you are positively impacting the lives of others. Let me start with lessons learned from Richard Currie.

Those of you who grew up with me and knew me as Janie Currie, daughter of Richard Currie, may be surprised to learn that another Richard Currie is one of the most successful Canadian businessmen of all time, who also happens to be a former UNB student and much more recently the esteemed Chancellor of UNB. He and I bonded when he first became Chancellor and I welcomed him by telling him that my father’s name was Richard Currie, and that, no, my Dad wasn’t from Saint John, but my father-in-law was. During Convocation activities this year Dick Currie was being recognized as UNB’s most generous living benefactor, and I’m going to guess that he has left the others on the list in the dust. I think his story and some of his advice are well worth sharing.

My grandfather, yet another Richard Currie, was a poor Maritimer who followed the well-trodden path “down the road” to the “Boston states” for a better life. That better life included ensuring that his kids (including my Dad, Richard Currie) got a solid education, at whatever sacrifice it took my grandparents. My grandfather found work in Boston in the grocery business, and they lived in a cold water flat, saving everything for their kids’ education. This was in the early part of the 20th century.

Dr. Richard Currie came from a similar poor Maritime background in Saint John, New Brunswick, raised in a family that also put a strong emphasis on getting a solid education in order to raise yourself up. This Richard Currie also went to work in the grocery business, only he ended up running the largest grocery chain in Canada, Loblaw’s. Slight difference! To say that worked well for him would be a bit of an understatement, and it worked well for everyone else as well. During his 25-year tenure as head of Loblaw’s, Loblaw’s market share increased over 350 times and it became the largest private sector employer in Canada. When he left Loblaw’s (and then its parent company, Galen Weston Ltd) in 2002, 30 years after he started there as a VP, he became Chairman of BCE and Bell Canada. In 2009 he sort of retired, and now sits on several boards and gives invaluable advice when asked. A Canadian success story par excellence. What does he credit his success to: his university education, which he could only get because of a scholarship; and starting out with two advantages – “two great parents and no money”.

At the “Thank you, Dr. Currie” event on Convocation day in October, two stories arose in particular that I’d like to share. The first one Dick Currie told himself. He was able to attend university because he won an all-expenses-paid prestigious Beaverbrook Scholarship. He also won a national prize in mathematics, all in all totalling $1000 in 1955. It was all he needed, for everything and then some. At the end of his first year he had a summer job as an engineering student and made very good money, so much so that along with his two scholarships he’d have more than he needed. So he got in touch with the agency that provided the mathematics prize and let them know that he didn’t need it for the coming year; they should give it to someone who needed it more. Dick’s message was, “Once you have all the money you need, give the rest away.” This isn’t to say that he and his family don’t live very well. Of course they do. But it’s not about seeing how much you can acquire; it’s about being the best you can be at something, helping others along the way, and having the privilege to be able to impact people’s lives, as they have done for you.  He has done that in spades for UNB and for UNB’s students. 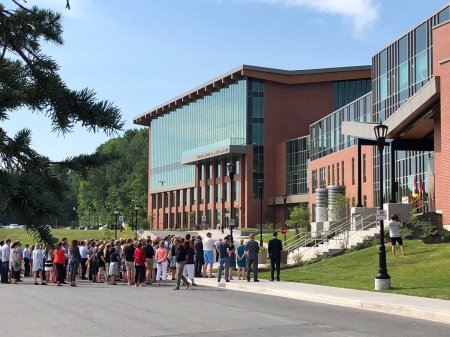 The other story I’d like to share is something that I never would have thought of; it reminded me that, even though I try hard not to, I do look at things through a privileged lens. This story was related about Dick by our president. As some of you will know, when applying for prestigious scholarships and even for entry into prestigious universities, young students are often asked to write essays describing contributions they’ve made to their community. This usually results in an essay that describes the several volunteer activities these top students have engaged in, such as tutoring for newcomers, volunteering in hospitals, coaching kids’ sports teams, etc. Somehow Dick Currie glommed onto the reality that some high school students from poor families didn’t have time for volunteer activities; they were too busy working part-time whenever they weren’t studying, in order to help their family. There was no way that scholastically qualified students in vulnerable family situations could satisfactorily compose such an essay. No way. So for Dick Currie’s prestigious Currie Scholar scholarships, the essay question instead asks the applicants to describe obstacles they’ve had to overcome. Hence any qualified student, from any background, competes on an equal playing field for these scholarships. Such a simple change in essay topic, just waiting for someone with the wisdom to recognize the need for it.

And Dr. Currie stays very close to all his scholarship recipients, keeping track of their progress and mentoring them. That’s quite a gift in and of itself.

The remarks and advice offered by our two honorary degree recipients – and their stories ­– are deserving of their own blog posts. So for now, I’ll just repeat what the packed auditorium shouted in unison when Richard Currie was ushered in at our new Kinesiology building last month, “Thank you, Dr. Currie!”

P.S. And how can you not be impressed by someone who names one of his first offerings of major scholarships after his grandmothers?!