The Case of the Missing Toys, and conundrums in writing for children

One of my New Year’s resolutions was to write a new children’s story, maybe even a series.  I’ve had an idea for a new story line in mind for some time; it includes at least two children who are recent immigrants and face issues from time to time that their non-immigrant friends don’t. But because of the controversies in the literary world this past year about cultural appropriation, I am now wondering if this story line would be viewed negatively through this lens. On the other hand, surely we aren’t supposed to restrict our writing to our own narrow world; that’s just perpetuating the concern of minority exclusion in kid lit.  We live in an increasingly complex world, and it’s important to get it right for young readers.

For example, I have come to realize that even when I write stories where all the characters are animals, I automatically give all the animals mothers and fathers, brothers and sisters, and usually also very “mainstream” names. Very stereotypical.  It’s important to expand the offerings in children’s literature so that every kid can feel included when they read or are read to, at least for the most part. How do we do that and not run afoul of the red flag of cultural appropriation? If you have suggestions, or reassurance that someone from one culture can include characters from other cultures in their writing without unintentionally offending people, I’d love to hear them.

Meanwhile, I’m resurrecting a detective series (a series of only 2 at the moment) for 5-8 year olds that I wrote several years ago to see if there’s enough life left in the concept to consider expanding the series. As I review this old writing, I’m going to be asking myself the question: How do I ensure these books resonate with all children?

The first two chapters from the first book in the series follow below. If you’re curious about how the mystery is resolved, let me know in a comment.  I can post the entire book elsewhere on my blog or just post the remaining 3 chapters.

The Case of the Missing Toys

Chapter 1 – Where are our toys?

​The screen door slammed behind him as Angus, more commonly known as Gus, raced into the kitchen. “Mom, I can’t find the Frisbee outside. We left it by the sand box last night.” “Ask your sister if she’s seen it, Gus. She’s upstairs in her room,” suggested his mother. “CLAaa – RAaa,” shouted Gus from the bottom of the stairs, “HAVE YOU SEEN OUR FRISBEE?” “Gus, don’t shout; go upstairs and talk to her,” his mother said – again. 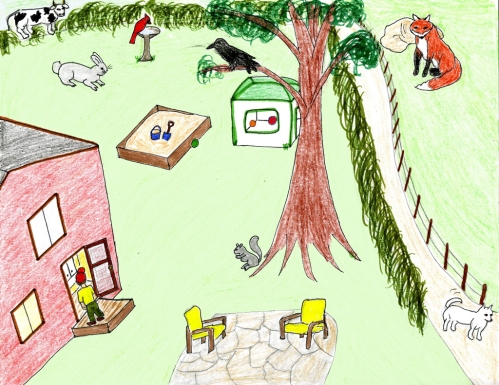 Clara appeared at that time. “No,” she said as she came down the stairs, “but earlier I was looking for the big blue ball we left outside by the sandbox last night. I couldn’t find it anywhere in the backyard.” Clara and Angus went outside to look harder.

Their mother watched them out the kitchen window as they uncovered the sandbox and looked inside, looked in the playhouse, and then disappeared around the side of the house, probably looking at what was stored under the back steps.

“That’s funny,” Clara said to Gus, “we can’t find the Frisbee, the blue ball, OR the yellow tennis ball. We couldn’t have lost that many things.” “I know,” he replied. “Mom is going to say that we probably left them at Dia’s, so let’s go next door and ask her before we tell Mom.”

But it wasn’t long before the kitchen door was slamming again. “Mom,” they cried together, “our stuff is gone. Who took it?” “Have you checked over at Dia’s”, responded their mother, “you know you often leave things there.” “Yes we did. Not there.” “Well, for now, let’s not worry about it. It’s so nice outside; why don’t you go out and play with what else is out in the sandbox.”

Clara and Angus went out back and got three red rubber balls from the playhouse and their pail and shovel from the sandbox and had lots of fun playing for the rest of the afternoon. Dia and her brother Rafi came out and they played “Store” and “Tag” until it was time to go in for supper.

Before they went in they were very careful to put the pail and shovel back in the sandbox and the balls back in the playhouse; they wanted to be sure nothing else got lost.

The next day was Saturday, a warm sunny day, and Clara and Gus couldn’t wait to go out to play, right after breakfast. But it didn’t take long for them to reappear in the kitchen. SLAM. “MOM, now our other stuff is gone!!!! And we KNOW we put it where it belonged before we came in last night. We were VERY careful.” “Hmm,” said their mother, with a look of concern on her face, “it seems as though you have a mystery on your hands. Daddy and I will have to think about this.”

​“Wait a minute,” said Clara, “a mystery? I know about mysteries. You do detective work. You look for clues and then figure out who did it. Gus and I can be a detective agency and solve this mystery. Yeah, Mom, that’s what we’ll do.” “Mom looked even more concerned. “I don’t know, Clara, that could be dangerous work.” “Don’t worry, Mom, we’ll be careful. We’ll have fun and we’ll find our stuff. Gus, let’s call ourselves the KidsOnly Detective Agency.” And they raced off to get started.

Clara dashed down the stairs to the basement playroom, with Angus right behind her. “What are you going to do, Clara?” he asked his big sister. “How are we going to find our stuff?” “We’re going to find the stuff by doing detective work, Gus, but first we have to make everything we need for our detective agency. I know all about how to do this,” she replied. Angus was used to his sister having lots of ideas, and he was anxious to see what was going to happen next.

​“We need an office. Let’s use this space with the table for our office. We need to make a sign. I’ll make a sign.” Gus knew better than to say that he wanted to make the sign, because Clara liked her way best, and besides, he couldn’t spell yet. He watched while Clara drew some designs and the words

“OK, Gus, you can tape this sign up on the wall while I make some detective cards.” “What are detective cards, Clara?” Gus asked. “They’re cards detectives give to people when they see them. I’ve seen them on TV,” she explained. 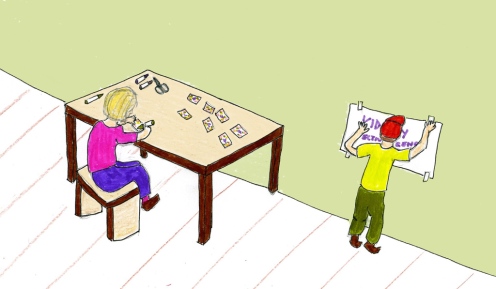 Pretty soon, she had made some small pieces of paper that had more words on them:

“What does that say,” Angus asked. When Clara told him, he started to scream for Mom, so Clara quickly changed it to

Then Clara spent so long making more cards that Gus got bored and played with his toys in the basement.

​Finally she was satisfied that they had enough detective cards to start their agency. “Hurray,” cheered Gus, “now do we go find our stuff?” “Not yet,” Clara answered, “we need our detective equipment. We need magnifying glasses, hats, notebooks, and pencils. I’ve seen that on TV.”

Clara shouted up the stairs, “DAAaa-DEEee, DO WE HAVE ANY MAGNIFYING GLASSES?” “Clara, don’t shout. Remember, you are supposed to come closer to ask me,” replied Daddy, as he appeared at the top of the stairs. “As a matter of fact, we do have magnifying glasses. I used to use them for identifying rocks and shells. I think they’re down here in the basement with my tools. Let’s look.”

Soon Clara and Angus each had a magnifying glass. “You know what,” offered Daddy, “if you are going to look for clues, you might want to take a bowl or some baggies to put your evidence in.” Soon they were all kitted out: detective hats on their heads, detective cards in their pockets, magnifying glasses in hand, a bowl in Clara’s other hand, and some baggies in Gus’s pocket. They were ready to go search the backyard for clues about what happened to their Frisbee, all their balls – and even their pail and shovel!

MORE CHAPTERS AVAILABLE IF THERE’S INTEREST, INCLUDING A CONCLUSION TO THIS WHODUNIT!

11 Responses to The Case of the Missing Toys, and conundrums in writing for children