How to entertain your 9-year old grandson for a week

Last week we entered new territory. Our 9-year old grandson flew to our home town all by himself (an official unaccompanied minor) to spend a week with us. Although we don’t live near either of our sons, we interact with their families often enough that we feel that our grandchildren are all comfortable with us. And they know our home, and are comfortable in our environment. However, we were still a little nervous when arrangements were made for our grandson to spend a week with us, all on his own. How would we entertain him? How would we keep him busy? Seven days suddenly seemed like a long time for this responsibility.

No problem. Our grandson showed the way; he had it all figured out. And, in retrospect, it dawns on me: In this world of heavily scheduled children – weekly summer camps, after school programs, music lessons, sports, etc. – kids need a week of down-time, sort of like practicing for retirement. And who better to do that with than their retired grandparents! We have embraced the retirement concept: Doing less is better. We just hadn’t realized that this life philosophy would work for a 9-year old. Granted, he approaches doing less with FAR more energy than we do. We don’t suddenly jump up while we’re playing a board game and hop around while we snap our fingers rapidly, all for no apparent reason other than pure exuberance. And when we lie on the sofa watching TV we usually just lie there, rather than hanging our head upside down over the side of the sofa or walking our feet idly up the wall above the sofa while our eyes remain glued to the screen. But these are early days in his practice for retirement. He’ll get there.

He was far less interested in being taken to things to keep him busy than we had expected. No, he didn’t need to go to Tree-go at our provincial park upriver. And, no, we didn’t need to arrange for a bike for him so he and grandpa could bike the trails together. His plan was to enjoy the pattern of life in our house, and especially to enjoy our well-known grandparent “leniency”. All by himself! And that’s what we did. A fine time was had by all. Thanks for coming, Gus.

So, what activities worked well for this particular 9-year old?

For any of you who may find yourself anticipating your first time ever with a grandchild on their own for an extended period of time, just relax and let them guide the way. Within reason, of course. And only if you’re in the fortunate situation where normal rules can be relaxed for a bit without causing too much grief from (or for) the parents! 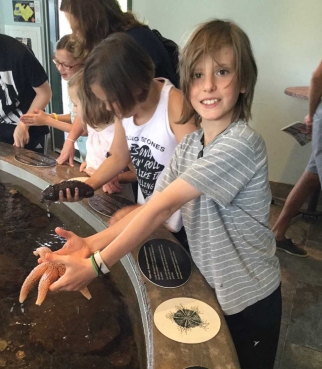 Thanks for a great week, Gus!

Whale photos from nbtourism.ca.  Very accurate representations, but I was too busy enjoying the whale show to take pictures!