Rivers, floods, and the rhythm of spring

Earlier today, I joined the throngs of fellow citizens of our fair city out walking and biking in the spring sunshine. A leisurely stroll or ride along the river and around downtown is always enjoyable on a sunny Sunday, but today everyone had something special in mind. Everyone was out viewing the high waters of this year’s spring freshet. And since this year’s flood has caused the closure of several downtown streets to cars due to high water, the neighbourhoods near the river are wonderfully quiet, with only the sounds of people enjoying each other’s company and the occasional sound of a sump pump motor sucking water from someone’s basement.

Floods aren’t fun. They damage property, dislocate people and animals, inconvenience countless others, cost lots of money, and in the worst cases can result in staggering human tragedy. They are also regular occurrences, so why have so many people lived along rivers for millennia?

There are many reasons, of course.  Before the advent of the railroad and then buses, trucks and cars, navigable rivers were the go-to highways. Boats trumped stagecoaches!  They allowed people to get from town to town, transport goods, and in logging country like ours float logs down rivers to seaports. For rivers that experience spring freshets after a winter of snow, the rising waters that overflow banks and spread across farmers’ fields deposit nutrients and top soil on the fields, renewing the soil for the new crops. And, for most of us these days who don’t avail ourselves of any of these benefits, we just love to live by the water.

The thing that we ignore until the reality hits us in the face from time to time is that there are also downsides to living near rivers. Sometimes there are droughts and the river dries up. Sometimes there are monsoons, hurricanes, or other causes of torrential rains that overwhelm riverbeds and cause massive flooding. Sometimes these occurrences are very rare, but in many locations these are regular occurrences. In our part of the world, the main source of flooding is seasonal – it comes every spring. Every winter the snow piles up in the forests and fields that surround the many streams that feed into the St. John River. And there are extensive forests and fields in the northern parts of our province that provide plenty of snowpack, just waiting to melt and flow downstream. That was certainly the case this year. 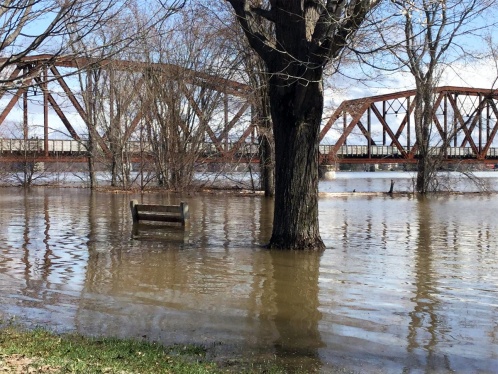 Lots of available benches on the Green today

Sculpture Garden at the Beaverbrook Art Gallery with a watery touch

We have been making this false pact with the river for hundreds of years. As I was walking through the oldest part of town this morning – the part closest to the river, of course – I read the historical plaques on many of them, which announce to passers-by that they were built in the early and mid-1800s. It dawned on me that the people who built these houses knew very well that the river could bring damaging floods, but still they built there. They clearly endured flooded basements and loss of stored food in their cold storage at the very least, and perhaps flooded stables to boot, but still they built.

Fast forward 100 years and people continued to build along the river. Homes, businesses, hotels, art galleries, government offices. Fast forward until today and still we build. We build barriers to try to keep Mother Nature’s rapidly rushing, cold, dirty water from surging into our homes, roads, bridge ramps, parking garages, and businesses, but she’s a pretty resourceful gal. No matter, we just won’t give up our riverside lives. And for the most part we get away with it. And when we don’t, like this year, we make do. We close those roads and bridge ramps that end up under water for a few days or a few weeks, we close parking lots that are inundated, we close off park fields that are under water, we fill sand bags to protect vulnerable building openings, and we commiserate with those neighbours who endure yet again the heartbreak of pumping inches or feet of water out of their basements and then repairing the latest damage. Then we get back to enjoying living near a beautiful river and hope that the next big flood is a long way off. Resilient or foolish, who can say! 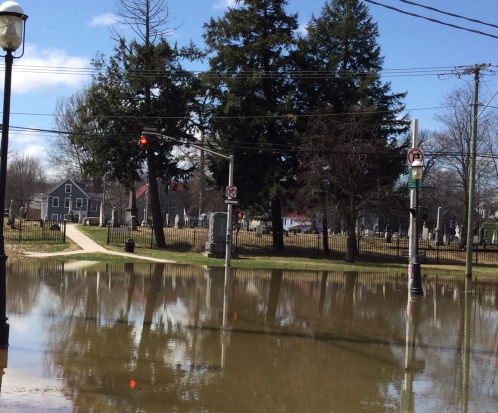 Traffic light not too useful at the moment

Flood level at Fredericton is 6.5 meters (21.3 feet), meaning that when the height of the river reaches 6.5 meters it starts overflowing its banks. For reference, in the summer it is commonly 1.6 meters. The river yesterday was at 8.2 meters (26.9 feet), and for now at least it is slowly receding (although we’re getting rain tomorrow). The marvelous riverside sculpture called Watermark (below) illustrates how high the water gets during very big floods. The highest pillar represents the height of the highest known flood, in 1936, when the river reached 8.9 meters (29.1 feet) or nearly 8 feet higher than flood level! The sculpture and the table of high flood levels give you an idea of how much extra water can inundate the city and surrounding areas from time to time, and how often it happens. 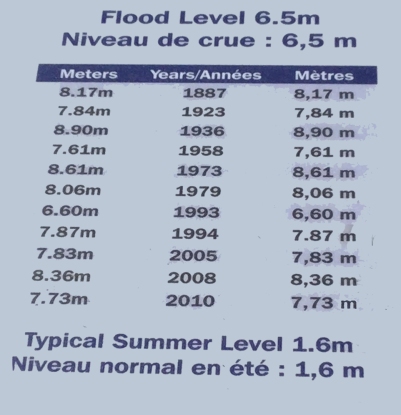 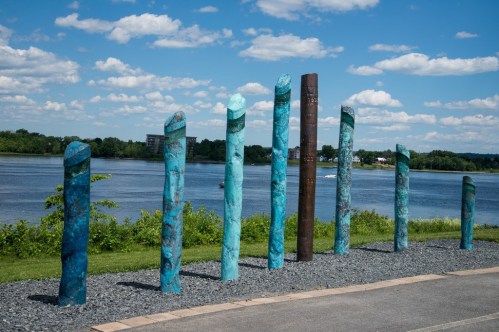 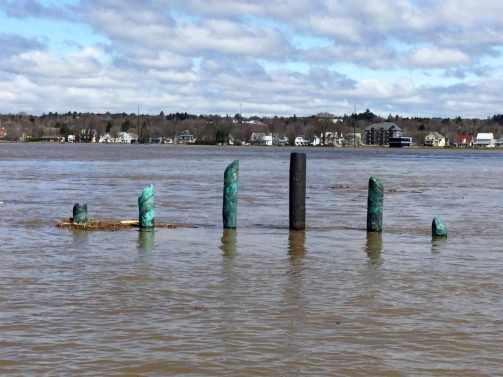 Our house is right on the river. Our property is low-lying and it is a rare year when the river doesn’t form a temporary lake in our backyard, which often attracts ducks and even beaver. This year it’s definitely a bigger than usual lake!  The house was built to be watertight even in another 1973-level flood. But the 1936 flood was a foot higher than that. It’s an adventure in living.

Our house is an island!

11 Responses to Rivers, floods, and the rhythm of spring