I find it difficult – no, impossible – to write about travel, running, or retirement in the immediate aftermath of the senseless carnage in Toronto on Monday. It was just a week ago that we left Toronto after a pleasant 4-day stay there, filled with family time and theatre-going. The only downside was the poor weather, which was cold and wet, culminating in an unprecedented 2-day April ice storm that played havoc with all means of transportation, including our ability to fly home on schedule.

Fast forward a week and everything is turned on its head. The weather made a rapid and dramatic change for the better. Spring has sprung, and with that the feeling that life is good. Walking down the street you have shivered along as quickly as possible all winter suddenly becomes a stroll. The air smells different. We want to soak it all in. Which is what everyone was doing in midafternoon Monday on Toronto’s longest street,  Yonge St., between Sheppard and Finch, when the unthinkable happened. What appears to have been an awkward, asocial young man who struggled to fit in either at school or in a very brief stint in the military, unleased his frustration and anger by mowing down two dozen innocent bystanders with a rented van. Just like that, ten people dead and many others injured while out walking in the welcome warmth and sunshine, probably thinking to themselves, “Life is good.” All this pain and incomprehension on the part of so many, and meanwhile the perpetrator can’t possibly feel any better. No winners, just losers. Just loss, so much meaningless, heartbreaking loss.

Yonge St closed off after the van attack – The Sun

Toronto has shown strength of character in many ways though this tragedy. Many people won’t know that Toronto is not just the largest city in Canada, but also the 4th largest city in North America, after Mexico City, New York City, and Los Angeles. Most people won’t know that Toronto is a remarkably diverse city, with just over half the population now identifying as visible minority, or that Toronto has the second largest number of foreign-born people of any city in the world, except for – wait for it – Miami! But in Toronto our foreign-borns come from all over the world. Canada is a land of immigrants, with fully half of our immigrants settling in Toronto. And within this rich multicultural, multi-racial population, the part of Toronto where this travesty occurred is a particularly diverse neighbourhood, and proudly so. It is to the immense credit of the city that great efforts were made to remind people of the importance of standing together. And stand together they did.

Monday night Toronto’s beloved – and for so long beleaguered – Maple Leafs (their ice hockey team for those of you far from Canada) were due to play an important playoff game against Boston in Toronto, and the custom is for thousands of fans without tickets to stand outside the arena in the Fan Zone, watching big screens, screaming, and generally having a good time. There was a very short time period when some people wondered if the Fan Zone should be disallowed for security reasons. Happily, that thought was put to rest quickly. 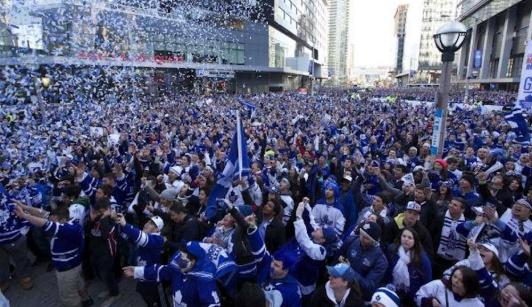 The Toronto police action – not shooting the perpetrator who was pointing a cell phone at the officer and begging to be shot – has gained worldwide attention, especially in the U.S., where such action seemed almost impossible to imagine. Some U.S. law enforcement analysts actually said that it was the officer’s duty to shoot when the suspect was pointing a gun at him. Folks, there was no gun (although the frightening reality is that if you live in a country where everyone is assumed to have a gun, the police are going to shoot, or so it would appear). To relay more background to this story, there certainly have been horrifying instances in Canada of mentally ill people brandishing weapons (a knife or some other object that could be used as a weapon) being shot and killed by police. In each case, not surprisingly, a public uproar and backlash has ensued. Henceforth, the police have undertaken training so that officers learn how to de-escalate situations rather than to be part of the counterproductive escalation, often without all facts. And Monday’s takedown showed to one and all that this training program has been a success. Much credit goes to the individual officer, but also to the Toronto Police Authority for taking seriously the public’s concern over shooting suspects more often than is justified and mounting this training program as a result. We now see its positive impact in action.

None of this brings back any of Monday’s innocent victims. None of this helps us figure out how we can identify people who are holding such anger and help them before it is too late. One of the shootings perpetrators in the U.S. in the past week was described by a former teacher as someone who had been bullied throughout his school years. Bullied relentlessly. He was damaged goods before he left school. How as a society can we minimize the damage done to people through bullying, abuse or neglect in the home, and a host of other conditions that result in marginalized, angry adults? How do we as a society identify such people, provide them with the supports they need to turn their lives around, and feel like they are part of society rather than misfits? What can we do to prevent them from blowing up because of their own pain and frustration, and in the process hurting others? These are the questions that I keep coming back to. Sadly, I have no answers.

4 Responses to Carnage comes to Toronto