Such a feel-good story – and, boy, could we use one

This won’t be a long post, don’t worry. But given how much unpleasantness we watch and read every day, much of it giving us such a feeling of helplessness, I thought it would be nice to share this good-news story.

One of the nicest activities I’ve been engaged in this year is visiting with one of the many new Syrian refugee families in our town. Two afternoons a week I visit in their apartment, one afternoon mostly working with the lovely young wife of the family, helping her perfect her English and understand more fully our Canadian traditions, and the other afternoon working mostly with their son, who has just started kindergarten. It is a joy to watch the process of integration of newcomers through their eyes, and to see the enthusiasm with which they embrace the peace, freedom, and welcoming community they have found here. They even manage the very cold weather with a modicum of enthusiasm.

The other day I received an email from the person at our local Multicultural Association who oversees the volunteer services, saying that the association had arranged for the volunteers to receive a box of chocolates made by a new Syrian entrepreneur, a chocolatier. I picked mine up this morning. It is the story of these chocolates that I want to share with you.

This refugee didn’t have much to bring from his war-torn country, but he did have his experience as a chocolatier. He opened his own factory in Antigonish, Nova Scotia just this past September, giving his new company the wonderful name Peace by Chocolate.

Everything about the wording on the box made me feel good. “A little peace of heaven.”  “One peace won’t hurt.”  The word “peace” written in Mi’kmaw, a local indigenous language, followed by the explanation “Peace. It’s beautiful in every language.” At the bottom of the inside insert: “Share your peace with us.” Most of us love getting a box of chocolates anyway; getting a box of chocolates wrapped in love and peace takes it to a whole new level. 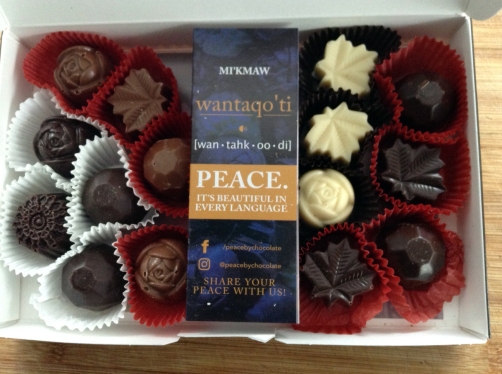 The story of the company can be viewed on the bottom of the box. As you can see from reading the image below, this family had run a successful chocolate factory in Syria before it was bombed and they lost everything. And now here they are, back on their feet and being embraced by Atlantic Canadians.

My husband and I were immediately taken with this product, both for its quality and its story. We agreed that it would make ideal small gifts for extended family members we are about to visit with in Ontario. I called the Multicultural Association for information on where I could find more of this chocolate in town and was directed to one of Canada’s major grocers. Off I went in the snow to make my purchases, after cleaning the snow off my car for the third time today. But, guess what, there was no Death by Chocolate to be had. It turns out that the store can’t keep the chocolate in stock; the product has been flying off the shelf. The chocolatier can’t keep up with the demand! The grocery (OK, it’s Sobey’s) has actually helped the young company to expand its production area and hire more people. They’re working on being able to fill the growing demand. And apparently this chocolate-making family couldn’t be happier living and working in small town Nova Scoia. So it’s a very good-news story, even though I can’t get any boxes of Peace by Chocolate to take to family in Ontario. At least not for this visit.

There is something more that I think needs to be said about this story. None of the Syrian refugees who were resettled in Canada just under two years ago – at least 25,000 people – would be here if Stephen Harper were still Prime Minister. Not one. His policy was similar to the one currently in force in the U.S. But because our policies changed dramatically with a change of government, our region, which is among the most rural, least affluent, and least populated in all of Canada, has literally hundreds and hundreds of very welcome new families. In less than two years, one of these refugees has started a new enterprise making chocolates, hiring other Syrian refugees and also local Canadians. And he has given his company the name Peace by Chocolate.

Merry Christmas, everyone. Enjoy as many “peaces” of holiday chocolate as you can!

13 Responses to Such a feel-good story – and, boy, could we use one