If ever there was a time when people might want to explore new paths to happiness, it is now. The world order has been turned upside down and compassion and civility across political divides is sorely lacking.

Possibly because of this stressful environment, articles on creating your own happiness seem to be popping up more and more frequently in magazines and newspapers, online and otherwise. Or maybe they’ve always been there and I’m just noticing more because of the discussions on happiness (and nirvana) that we’ve had in my philosophy group this fall.

I haven’t confessed this in a blog post before, but along with other favourite pursuits of mine that aren’t everyone’s cup of tea, I belong to a group of retired academics that meets every week to discuss philosophy. We have an ingenious plan of action. We assign ourselves philosophical readings that are dense, complex, and often nearly impossible to understand. Then we get together with coffee and goodies to dissect what we’ve read, in the hopes that someone has understood it better than the rest of us and to argue congenially about whether we agree or not. It’s a huge amount of fun. My husband thinks we’re nuts (nice, but nuts), as I’m sure most people do, certainly our spouses!

This year our discussion group decided to give the esoteric Western philosophers a rest after 7 years and take up Eastern philosophy for a change of pace. At the moment we are concentrating on Buddhist philosophy, and it has definitely got me thinking … and thinking and thinking. I’m just not sure exactly what it has got me thinking about; I believe the end game of Buddhism is to think about nothing – in the best possible way – and I’m not there yet!

Buddhism has hundreds of millions of followers and practitioners around the world, and so clearly has much to offer. Apparently there are more Americans who are practicing Buddhists than Episcopalians. I knew that Buddhism teaches non-violence (although what’s happening in Myanmar is not helping that image). And the surge in interest in meditation and mindfulness practices is following centuries-long Buddhists practices.

However, the philosophy that gave rise to these practices takes some digesting. These are my biggest stumbling blocks:

You can perhaps see why members of our discussion group might be struggling with accepting some of these beliefs. I get that life is suffering for many people, although I find that a narrow starting point, without much to inspire people. But it was the solution of overcoming one’s fate of rebirth and therefore overcoming the endless suffering of infinite lifetimes that blew my mind. I just have to put these starting premises down to different times, different places, and move on to what it is in Buddhism that has endured for 2500 years. And it’s probably this: Buddhism presents a path to overcoming suffering and finding personal happiness. And it appears that tools for happiness the Buddha introduced so long ago continue to have much to offer to our modern societies. Especially now. As if to prove that point, the main techniques that the Buddha put forward for achieving happiness, when taken in a modern context, are exactly what is being prescribed in the proliferation of magazine articles I have been reading: 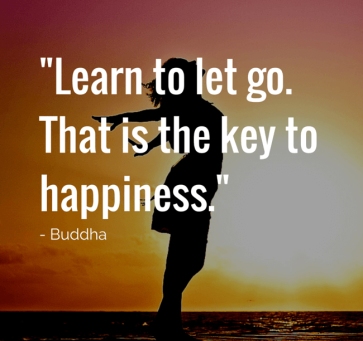 Along with several other suggestions in these articles on happiness, including physical as well as mental wellness, I recently came across something in a New York Times column that I had never encountered before and is not Buddhism-inspired: Write your way to happiness! I love this. Certainly writing has always been good for my mental health. In this how-to-be-happy article by Tara Parker-Pope she describes how writing might be used specifically for working through problems that are wearing on you:

“Some research suggests that writing in a personal journal for 15 minutes a day can lead to a boost in overall happiness and well-being, in part because it allows us to express our emotions, be mindful of our circumstances and resolve inner conflicts. Or you can take the next step and focus on one particular challenge you face, and write and rewrite that story.

We all have a personal narrative that shapes our view of the world and ourselves. But sometimes our inner voice doesn’t get it right. By writing and then editing our own stories, we can change our perceptions of ourselves and identify obstacles that stand in the way of our personal well-being. The process is similar to Socratic questioning (referenced above). Here’s a writing exercise:

Numerous studies show that writing and rewriting your story can move you out of your negative mindset and into a more positive view of life.”

What about your own happiness index at the moment? Do you have successful coping mechanisms for fighting off the negative thoughts or downright despondency that take over from time to time? Have you tried meditation? Mindfulness training? Exercise? Yoga? A big helping of tofu, quinoa, or kale (just kidding)? Have you used writing as a way to work your way through a negative situation? Do you think this could be effective?

The late Ursula Franklin, a highly regarded Canadian scientist, feminist, and pacifist, worked tirelessly for justice and world peace throughout her life. Her criteria for a good life were to be personally happy and publicly useful. Being – and feeling – useful to others may very well be one of the most effective routes to personal happiness.

10 Responses to Philosophy, Buddhism, paths to happiness … and writing