A lament for the Globe and Mail, at least the printed version

Consider this a rant. This is the last week that people in Atlantic Canada will be able to receive a print version of the Globe and Mail, either by home delivery or in stores. They say they cannot afford us anymore, and so as of this Friday, Dec. 1, 2017, the Globe – the same paper that proclaims itself “Canada’s National Newspaper” – will cease printing in our region or sending copies from elsewhere. 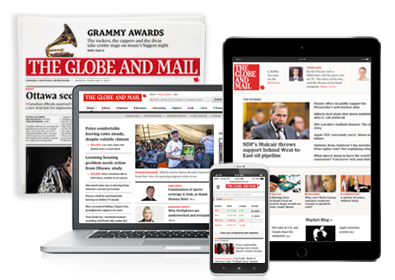 Our choices until Friday

I get it, most of you don’t read your news in printed form anymore. You read it online. You watch it online. And your reading habits are the reason why newspapers are having such financial challenges. It’s hard to keep those ad revenues flowing when circulation is down. Just today, Postmedia and Torstar announced a deal that will see a few dozen small community newspapers shut in southern Ontario. Finding a new business model that works is not easy in this online world; just ask the retail business.

I happen to be one of that dying breed that still reads the print newspapers (at least until Friday), even though I spend a frightening amount of time each day devouring news online as well. Reading the paper is one of the ways we start the day in our house. We discuss what we’re reading with each other, and save the crosswords and Sudokus to do later. Crosswords and Sudokus are not screen-friendly!

I say I understand the financial challenges that newspapers face, and I mean it, but I do have a few problems with this decision by the Globe and Mail. They aren’t ceasing home delivery or retail availability of their newspapers elsewhere in Canada. I understand that our region – New Brunswick, Nova Scotia, PEI, and Newfoundland and Labrador – doesn’t have a large population, but are they still delivering to northern Ontario and northern B.C.? Do they fly papers into Whitehorse or Iqaluit? Or are we in Atlantic Canada just an easier mark than anywhere else? We’re a politically expedient choice. Easy decision.

When the Globe communicated to their subscribers some months ago that this would be happening, for reasons known only to them they thought they were softening the blow by announcing that although they would no longer be offering any access to their print version anywhere in our entire region, they would be adding a new reporter based in Halifax to cover Atlantic news. Interesting. This is basically admitting that they’ve called themselves “Canada’s National Newspaper” (their tagline) for decades but never actually had a reporter covering Atlantic news. Maybe that explains why they barely cover the story of our university hockey team (Go UNB V-Reds!) as we keep winning Canada’s University Men’s Hockey Championship (six times since 2007, including both of the past two years), as opposed to having several stories about McGill’s men’s hockey team making the playoffs and having a good shot at winning, when in fact McGill lost to UNB. I happen to be a graduate of both schools, but just sayin’. New Brunswick team versus Montreal team; what’s newsworthy to the Globe?

Globe and Mail, I really do understand that newspapers are struggling with many challenges in this digital age. And I understand that as fewer people subscribe to print newspapers, tough decisions have to be made. I only ask for a little equity with respect to which areas continue to get served with print newspapers and which ones don’t. If you treat all the areas in Canada that no longer have sufficient print subscribers to cover your costs the same, we in Atlantic Canada will understand. But as it stands, I do not believe that is the case.

And I have lots of company in thinking that it is time you gave some second thought to changing your tagline. At the very least it should be something like “Kind of Canada’s National Newspaper, but mostly Southern Ontario, with a little bit of Quebec, Alberta, and B.C.” or, if it needs to be shorter, “Canada’s Almost National Newspaper.”

I wish you well in your quest for financial security. We need good news reporting; we’ve all been reminded time and time again this past year just how important good journalism is! I will read you online and continue to read our local paper in print (thank you, Daily Gleaner). And, Globe and Mail, may I say that I hope reinstating Tabatha Southey will be at the top of your list for when you get your money issues figured out!

12 Responses to A lament for the Globe and Mail, at least the printed version