Great news: not being a morning person doesn’t mean you’re lazy after all 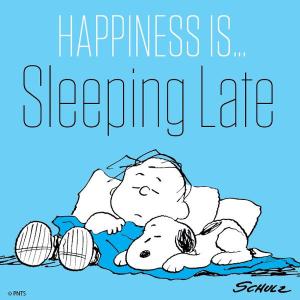 Confession right up front: I have never been a morning person. Never, ever. I have managed to be reasonably responsible and fairly successful despite this flaw, but there has never been a time when I have not believed that if I had tried harder (or at all) to overcome this shortcoming I would have been a better person. I knew how lazy I really was. How much I loved staying in bed after the alarm went off, preferably sound asleep.

Until now. As of today, thanks to my new hero, Amanda Ruggeri of bbc.com, I realize that I’ve had it all wrong for the past 70 (OK, 71) years. Being a morning person isn’t a sign of virtue after all, it’s just a matter of genetics.  Ruggeri’s recent article, Why you shouldn’t try to be a morning person, has me walking with my head held a bit higher.

The message is everywhere. We are told about how people in charge – successful people – get up at obscenely early hours after scandalously few hours of sleep. Typically, these same paragons of virtue hit the gym or the trails before the sun comes up and are busy in their offices before the rest of us leave the house. Knowing this has always made me feel a bit defeated before I even started my day – although not defeated enough to get up earlier.

Having read Amanda Ruggeri’s life-altering article, I now know that being a morning person or a night owl (or in the middle, as is half the population) is genetic, nothing more. It turns out that getting up early every morning, bright-eyed and bushy-tailed, isn’t necessarily a sign of an extremely motivated, self-disciplined person who attacks every aspect of their life with the same steely resolve. Gosh, I wish I had known that many, many decades ago.

I had an inkling that this may be more the case than I had always assumed when a long-time friend of mine, who is a stereotypical morning person – and someone who bakes her own bread (something else that I am not genetically disposed to) – disabused me of the notion that she approached all life tasks with the same sense of commitment that she did those that I noticed the most. She just tackled what she really wants to do with a vengeance, and started very early. So, even before I read this liberating Ruggeri article earlier today, I had slowly started to absolve myself of the sense that because I started doing things (much) later in the day I was somehow less of a human being. I don’t get to the Saturday Market at 7 a.m., in fact more often than that I don’t get there at all, but that doesn’t make me a bad person. I would never thinking of running before 10 a.m., even though some people I know are at the gym or pool before work; surely a lunch hour or after work is just as good? Even better when you’re retired, when any time of day is available. 🙂 But, somehow, despite sticking stubbornly to my own schedule, I’ve always felt a bit slothful about it. I’ve always felt like I had to make an excuse for my dislike of mornings. Until now.

I have absolutely no idea how I got through those years when we had to get kids up and ready for school before going off to work. Being awake is hard enough; talking to people early in the morning is asking a lot; putting breakfast in front of sleepy kids (those genetics) when you don’t want to eat breakfast yourself is a challenge; and, having to make lunches for kids in this state is brutal. Somehow, I got through that time. The good news for those of you in the midst of this routine right now is that one day you will wake up and the kids won’t need you to do this for them anymore. And before you know it, you’ll have forgotten all about it. It’s selective amnesia; that’s how we survive!

A very long time ago – when I was in second year of university – some well-meaning friends convinced me that if I got up early before a final exam and ate a proper residence breakfast, and then spent an hour reviewing notes one final time before a 9 a.m. exam, this would somehow be beneficial. That’s what they always did. Oh my. After the challenge of getting up long before my body and mind were willing, I had to find the breakfast cafeteria, which turned out to be in a different place than where we had lunch and supper. (Yes, this was the first – and last – time I got up for breakfast during my two years in residence!) The hour during which I was meant to be engaged in the highly-touted final exam review before heading off to a gym full of rickety exam tables, I was so groggy that absolutely nothing sunk in. An extra 90 minutes of sleep instead of breakfast and grogginess would have served me much better. Now I realize that it wasn’t simply that I was being lazy, I just shouldn’t have been up so early. It’s my genetics!

I have a number of ways of accommodating my dislike of getting up early. To my credit, I’ve never been late for work. I know exactly how long it takes me to get there and I know exactly how long it takes me to get ready. There is no dawdling. I don’t like eating breakfast anyway, so I’ve always saved 10 minutes by leaving that out of my getting-ready-to-leave-in-the-morning routine. Ten more minutes to sleep.  Once granola bars came into being, I actually started eating something before lunch for the first time since my mother started back to work and had to leave the house before I left for school, sparing me from her glaring at me while I pretended to eat my breakfast. Eat one granola bar on the way to work (high in fibre, chocolate-less), eat another halfway through the morning. Perfect for late risers. I have also always been happy to work late and keep working when I get home; just don’t ask me to get there at the crack of dawn.

Things from Amanda’s article to consider:

16 Responses to Great news: not being a morning person doesn’t mean you’re lazy after all