The end of eating?

The other day, as a group of us grappled with the important question of the meaning of life (hey, someone’s got to figure it out!), a young colleague suggested that humans have evolved into far more complicated beings than was the case a few millennia ago, in large measure due to our interaction with complex modern technology, and that our needs, desires, and expectations will have changed accordingly. Those of us of the older generation weren’t buying it, observing that the fundamental things we’re all looking for – happiness and fulfilment – haven’t changed. However, an article I came across in this morning’s paper has given me pause. My younger colleague might be onto something.

The article concerned a U.S. company called Soylent, which has had its products banned from sale in Canada because they didn’t pass the requirements of the Canadian Food Inspection Agency. These things happen. The U.S. occasionally bans some food, medicinal, or mechanical product that is available in Canada, and one wonders why. Canada bans some food item or drug from time to time that’s available in the U.S. and one might wonder why as well. [And Canada occasionally neglects to ban something that should definitely have been banned.] One would think that the respective inspection agencies would be in agreement when making these determinations, given presumably similar data, but apparently not always. I don’t usually read the small print on these decisions. However, I wasn’t in a hurry to get going this morning, so the article got more attention than might normally have been the case.

It turns out that Soylent is a full meal replacement, available either as a drink or in powder form. It was developed by someone who was working in Silicon Valley a few years ago and made the enlightening observation that time spent cooking – and eating – were getting in the way of working. Why not find a way to do away with the whole process? Why not, indeed! So this product is intended to do away with all that wasted time; you can just chug it down at your desk and forget about having to stop to eat. How remarkably liberating. And there is no doubt that grocery shopping would be seriously simplified. Genius.

Skipping the bother of eating, life is good!

It appears that there are some warnings that come along with the product; for starters, you should start by only imbibing a Solvent drink once per week until your body “acclimatizes” to this new food source. After that, presumably you can figure out what works best for you. Maybe you’ll still want to eat some actual food from time to time, who knows. It also turns out that the company had some recalls with earlier versions of their products because of gastrointestinal illnesses. But if Soylent gets their products sorted out so that they’re safe, and perhaps actually do provide one’s body with all its required nutrition, is this the way of the future? Perhaps this new technological breakthrough will change how we define happiness or fulfilment. 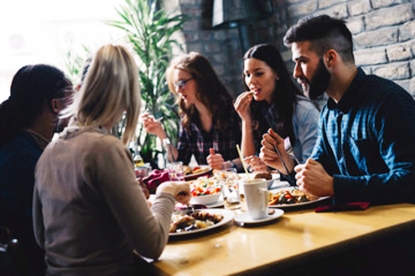 Work colleagues bonding over food, on the way out?

Think of the economic advantage gained by a region or country that has overcome the inconvenience of eating; those happy, fulfilled people can just keep on working productively. Pity the rest of the world having to sit down for full meals, lulled into thinking that they’re actually enjoying the time spent talking with friends and colleagues, tasting a variety of flavours and textures, maybe even relaxing. For now, thanks to the fussy folks at the Canadian Food Inspection Agency, we Canadians are going to be forced to stick with eating food and wasting more time. That is, unless we can successfully smuggle a supply of who-needs-food-when-you-can-work drinks across the border!

14 Responses to The end of eating?