Quilting projects continue, so does trial and error!

In May I posted about some lessons I learned when putting together a quilt for one of my charming young grandsons. Happily, the eventual result was proclaimed a success by its young owner. 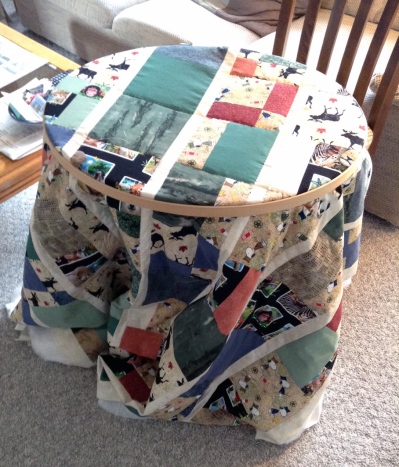 I took my own advice when designing the next one, for the other young grandson in that family, and since I had already acquired several busy, patterned fabrics for him, I chose a simple pattern where the fabric patterns didn’t compete with each other. Based on a design I found online,

I ended up with this result, which pleased me, its owner being too young at 7 months to have been able to voice an honest opinion.

Building on those experiences, and reminding myself of how much more satisfying it is to work on a quilt than to become consumed by the sad state of world affairs, I launched into a quilt project for a somewhat older grandson. This time, moving on from muted colours, I had the challenge of deciding what would be perfect for a room this particular young man had deemed should be painted dark blue, a young man with strong interests in basketball, sports in general, outer space, and animals. No problem, I thought, there have to be lots of fabrics with small patterns involving sports, animals, and outer space, preferably with a dark blue background. I could envision what they might look like as I thought through the endless possibilities. I took myself up to our local fabric store, full of enthusiasm, and headed over to the quilting section. Oh, what a disappointment. They had even less to choose from than when I had been acquiring fabrics for my former projects earlier in the year. Our quilting specialty store was no better help. The batiks were to die for, but young grandsons are not big on batiks … and batiks aren’t big on basketball and planets.

I went to my usual fallback position; I googled “fabrics sports outer space”. I should have known that there would be online fabric stores; why hadn’t I thought of that before? There are online fabric stores in both Canada and the U.S., it turns out. You can even buy fabric through Amazon. For those of you who love sewing and haven’t done this yet (or maybe I’m the last one to find out), you can search through their fabrics just as though you were browsing in the aisles. Lots of fun. The fabric I really wanted came from the U.S., which I was a little leery of, but a further google on reviews of ordering fabric online convinced me that it was worth a try. I held my nose and ordered.

Lo and behold, a week later a soft package was delivered to our door, filled with a fabulous assortment of fabric for this new quilt. The only problem was that I hadn’t spent enough (any) time thinking about the size of the images on the fabrics. They were too big to use in small pieces; the patterns on the fabric would have been lost. So I changed the idea I’d had and instead decided to make relatively large squares of each fabric design, kind of like a photo gallery.

Because the backgrounds of the fabric were quite dark, I decided to frame each “picture” square in an electric solid colour. I was convinced this was going to be fabulous. You can see where I’m heading, right? Once I got it together I could see that the electric “frames” were just adding chaos. It was too busy; it had no focus.  Sigh. More trial and error. More learning experiences. 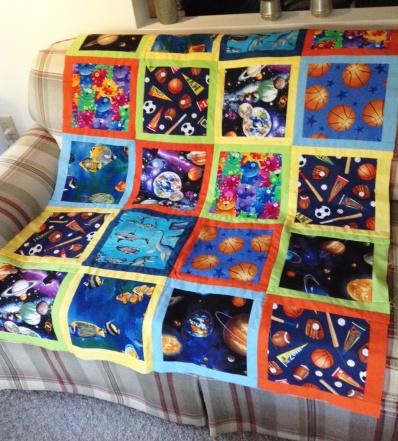 So, I started over again, using just one relatively subdued colour for the “frames” and hopefully highlighting the “pictures”. I was much happier with this result. Quilt top now complete. Quilting in progress. Let’s hope the soon-to-be recipient is pleased! 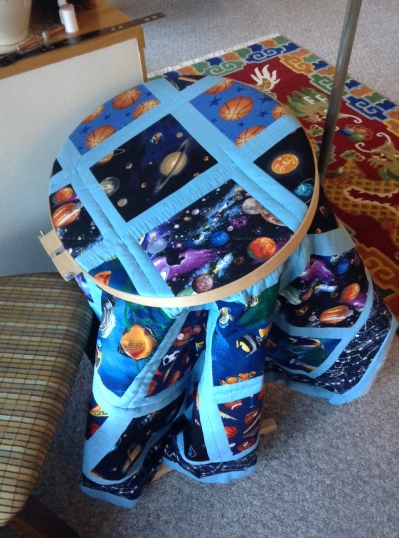 5 Responses to Quilting projects continue, so does trial and error!