Costa Rica: why it rates a top spot in the World Happiness Rankings

As I reported in a recent blog post, we spent our March Break week this year in Costa Rica. Along with its remarkable biodiversity and the resulting opportunities it presents its to visitors to observe an abundance of animals, birds, and plant life in very different habitats, Costa Rica also provides an example of how “developed” countries as well as “developing” countries might do things differently, to the benefit of all their citizens.

Before our trip I had known that Costa Rica was considered to be a bastion of stability in a region not known for stability. But I didn’t know why. It turns out that this country of 5 million people has had a history of enlightened leadership in progressive social development and environmental protectionism for a long time. The Spanish who colonized most of Central and South America apparently decided that this part of their potential claim had little value (no gold) and so left them pretty much to their own devices. And, similarly to the Acadian society in eastern Canada when left to their own devices by France (until the British came along and cast them out), a democracy grew that was remarkably egalitarian for the times and the region.

Things I did not know:

All this brings me to the UN report released last week listing the rankings of the countries of the world according to the UN’s Happiness Index. This is the fifth year since 2012 that the UN’s Sustainable Development Solutions Network has made these calculations and published the results. There are a number of indices and statistical machinations that go into producing the rankings, details of which can be found online by googling (one of my favourite activities). Aside from indices one might expect, such as GDP and life expectancy, there are also intriguing measures called “Generosity”, “Trust”, and “Freedom to make life choices”. News headlines in Canada and the U.S. announcing their rankings piqued my interest. When I read the list of the top 10 happiest countries, I made a glib observation about how having a cold climate seemed to help (all the Scandinavian countries and Canada), but of course I knew it was more likely to be as result of the commitment those countries have to strong social programs.

In taking a closer look at the full report on the findings for 155 countries, I was surprised and pleased to see that Costa Rica made #12 on the list, ahead of several “western” countries, including the U.S. I decided to explore the possible reasons for one country to pull a higher ranking than others. I took a look at the top 20 countries – the happiest according to this year’s rankings – and examined some data that help define the socioeconomic profile of each country, looking for any trends. Here are my findings: 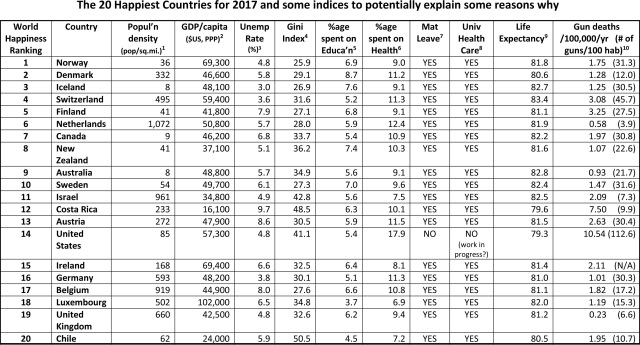 As you can see, there aren’t really any trends. The top 10 include countries from densely populated countries and sparsely populated countries. They include countries that have higher GDP/capita than the next 10, but also some that are lower. It seems that neither how close you live to your neighbour nor how much money you make is the defining factor.  Nor necessarily is income inequality. Costa Rica and Chile have higher income inequality indices (Gini index) than the others, but they are respectfully low for developing countries. The U.S. and Israel are outliers with respect to income inequality, but they still make #14 and #11 respectively. It appears that there are slight variations among the data points I looked at, but no trend. When you mix it all together, the citizens in these 20 countries are happier than citizens below them in the list. My guess is that living in any of these countries offers its citizens a society they feel part of and paths to a future where there is hope. For me, one of the very best messages on the list is that Costa Rica (and Chile, too), a country without anything like the wealth of the other countries, has had the vision and leadership to forge a future for its citizens that gives them that sense of common purpose and hope. We can all learn from them. Happiness isn’t only about money!

6 Responses to Costa Rica: why it rates a top spot in the World Happiness Rankings