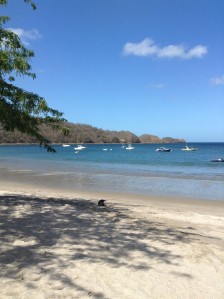 The #1 reason three generations of our family spent March Break in Costa Rica this year was because our grandchildren wanted to see monkeys in their natural habitat. They wanted to swim for sure – almost all day every day – and they were more than happy to spend a week without jackets, hoods, boots, mitts, and tuques, but the monkeys were the big draw. It’s hard to disappoint on that front when you spend any time in Costa Rica.

Costa Rica is a nature lover’s delight. Its biodiversity is extraordinary; it is among the most biodiverse countries in the world and, given its relatively small size (similar in size to the state of West Virginia), it is considered to be the most densely biodiverse country in the world. It has tropical rain forests, cloud forests, mangrove forests, coastlines on both the Atlantic and Pacific Oceans, and also tropical dryland (aka deciduous) forests, which was the one Costa Rican ecosystem we hadn’t known about and the one we ended up staying in and exploring.

When we decided to go to Costa Rica we were aware that to do it justice at all, you really need at least two weeks and a plan for going to more than one part of the country in order to experience these multiple ecosystems. But we also knew that we didn’t have 2 weeks, we only had one week, and that when traveling with 6 people spanning 3 generations the best plan is the simpler the better. So we elected to fly to the city of Liberia, in the northwestern part of the country, and stay in a resort in that region, making a few day trips when we weren’t swimming. We knew we wouldn’t be doing Costa Rica the justice it deserved, but we hoped for the best.

The desire to see monkeys in their natural habitat was satisfied within minutes of checking in. The natural habitat of capuchin monkeys, at least, has clearly expanded to include resorts. Why? Because where there are people there is food! These fellows were climbing along our balconies, checking for open doors and leftover snacks.

We were surprised to learn that this corner of Costa Rica is very dry, hence the tropical dryland forest. Of course, we shouldn’t have been surprised; after all, the west of coast of North and South America south of San Francisco and west of mountains is all dry, including some enormous swaths of desert on the west coast of South America. It turns out that this part of Costa Rica, the province of Guanacaste, is cattle country, as we were to see big time. We spent one day viewing birds and animals along a river in one of the national parks, and came across the unexpected treat of perhaps a thousand or more people on horseback, getting ready for Liberia’s annual Horse Parade. Seeing that number of horses and the number of people who could handle their horses so well and so effortlessly, casually chatting (and drinking!) as they waited to line up for the parade, illustrated just how prevalent the cattle industry and associated horse culture is in this part of Costa Rica.

Endless array of magnificent trees along the river bank, hiding lots of wildlife

White-nosed coati enjoying a meal from the termite nest

Croc eying lots of tempting prey on the river bank

Snowy Egrets, one of many types of heron we saw 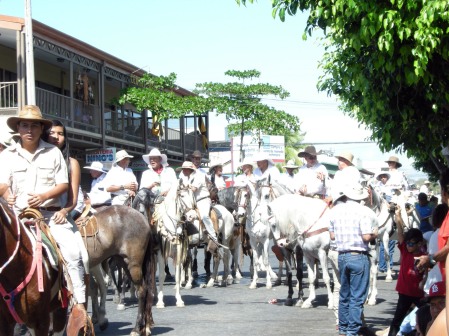 Gathering and socializing before the Horse Parade

Another day took us into the dryland forest itself, walking up a hillside and then zip lining down again through the canopy, getting to see more of Costa Rica’s wildlife, even the elusive sloth. 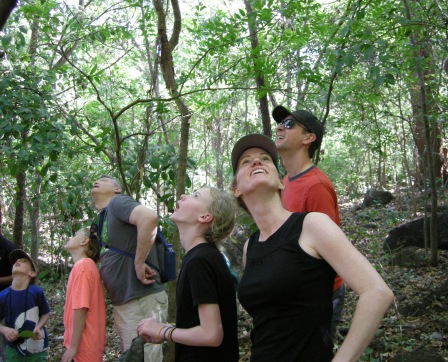 On the lookout for animals

When you get lucky and see a sloth, this is what you see. They sleep about 15 hours a day. 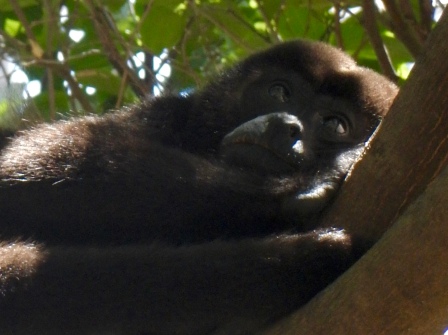 Proof that I zip-lined

Costa Rica offers so much more than we were able to see, and in addition offers sunshine and warmth that we northerners crave in winter – at least for a week or so. As well, Costa Rica has some important social lessons for the rest of the world, which I hope to share in a follow-up post. For example, although most definitely a developing world country with an average wage a fraction of that of western world countries, it ranked 12th in the World Happiness Report, the only developing country in the top 20 except for Chile (at 20th), and ahead of Austria, the U.S., Ireland, Germany, Belgium, Luxembourg, and the U.K. I think there are some interesting reasons for this. Stay tuned! 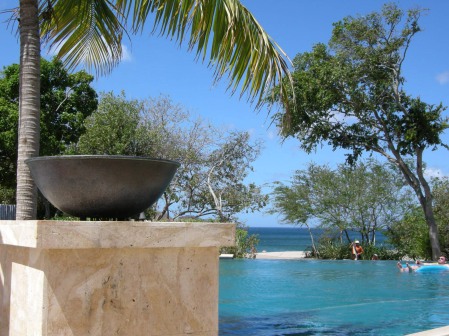 It wasn’t all educational!