Cambodia: Life along the Tonlé Sap and Mekong Rivers

The travel companies that have been so successful in building a thriving river cruising industry in Europe are now expanding their offerings to new destinations, including the Mekong River in Cambodia (and Vietnam). This is 1st world travel in a 3rd world country, and for us it proved to be fascinating, educational, gratifying, and humbling. I’ll attempt to share a few observations.

Geography. Cambodia is the smallest of the SE Asian countries by landmass and especially by population, with 15 million people, 90% of whom are Khmers (indigenous ethnic group) and almost all of whom are Buddhist. A large lake, Tonlé Sap Lake, sits more or less in the middle of Cambodia, with the extraordinary Angkor Wat temple sites and Siem Reap at its northern end. The Tonlé Sap Lake varies enormously in size depending on the season, and the Tonlé Sap River, which connects the lake to the Mekong River, actually reverses its direction depending on the time of year because of the monsoon cycle and the topology of the basin. Six months of the year the river flows from the Mekong north to the lake and the other six months it flows from the lake south to the Mekong. Not surprisingly, the depth and width of the lake and river change throughout this cycle as well. As a result, when we boarded our boat, we drove south for a few hours from Siem Reap to board at a spot that was accessible and then cruised north to get to our desired starting point before heading back south towards the Mekong! Got it?!

Rivers in this part of the world are broad, brown, and dotted with floating clumps of water hyacinths; they are a pervasive presence in a flat, (very) hot, (very) humid landscape. You may think that you are looking at homes on the banks of the river and then you realize that it is actually a berm and that there is another world of water on the other side of the bank, perhaps allowing for more rice paddies and targetted fishing.

Village life. Rural life has a rhythm very similar to what it has been for a very long time, except for the addition of some electricity and satellite dishes, even on rickety houseboats. And rural life is built very much around water. People fish, grow lots of rice, grow fruits and vegetables, and raise a few chickens and cows (or water buffalo). Children all go to school at least at the primary level, although they currently run double sessions each day to meet the demand (which we actually had as well when I was young because there were so many kids coming into the school system as the baby boom hit). Homes may be on land, in which case they are invariably built on stilts because of the variations in water level, or may be house boats moored together as part of floating villages. People living in floating villages are as entrepreneurial as people on land, with people opening shops on their boats, selling food to each other, raising fish in netted areas tied to their boats, etc. 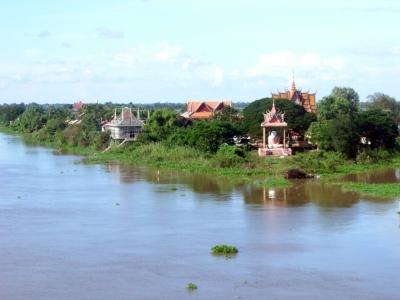 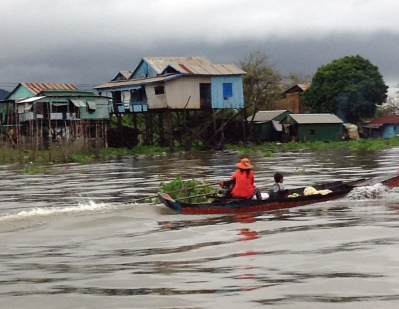 Buddhism is an integral part of Cambodian culture. Homes have shrines to their ancestors inside and often have shrines outside as well. Temples and shrines dot villages and countryside. 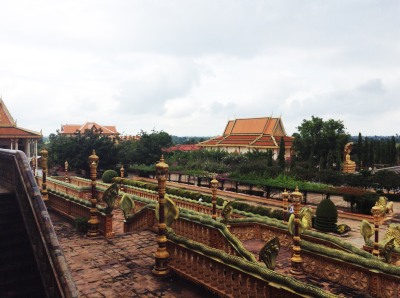 A monastery complex near Koh Chen on the Tonle Sap River 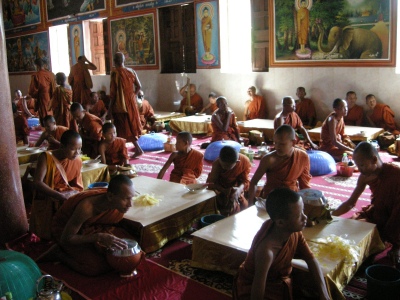 The legacy of Pol Pot and the resilience of the human spirit. It’s sobering to contemplate how often it has been the case that when a nation – or group of people who think of themselves as a nation – has been oppressed by foreign aggressors or colonizers, the person who leads the fight for independence becomes a force for evil to his own people (I think it’s always been a ‘him’, although perhaps I’m wrong). Pol Pot, who led the fight for Cambodia’s independence from the 100 years of ruthless rule by France, had to have been one of the worst. It is estimated that at least 1.7 million Cambodians (1-3 million, 25% of the population at the time) were killed by their own people in the relatively short period of time in which Pol Pot ruled (1975-79), by execution, overwork, disease, or starvation. The entire population of the capital city of Phnom Penh (2 million people) was ordered to march out of the city and into slave labour in the countryside. It was hell on earth in their own country, directed by the man who was meant to be their saviour.

Our guide in Cambodia was born in 1970, one year before our older son. His family members were all executed – in their case because they were teachers and hence the elites, not of the land – but somehow he lived. He was sent to “re-education camp”, where he was stripped of his name, his birthdate, and any memories he had from being part of a family. He was made a child soldier, and at age 9 had the option of killing people with his AK-47 or running in front of the others and be killed himself. After this nightmare, which engulfed the entire population, he was sent to a Buddhist orphanage. Somehow, this particular man has survived, and is a productive, warm, caring person. It is difficult to imagine how he has managed to come through this more or less whole, although certainly he did admit to suffering from nightmares. My guess is that this story is replicated hundreds of thousands of times across Cambodia, and that not everyone has been able to recover to be as fully functional as our guide. Given that most recent history, the lives people are fashioning – despite a less than open society – is humbling. They have yet to have the gain the economic momentum that Vietnam has, but one has to have hope, especially hope for peace.

Killing fields at Choeung Ek outside Phnom Penh; bones, teeth, and old clothes continue to emerge out of the shifting mud. 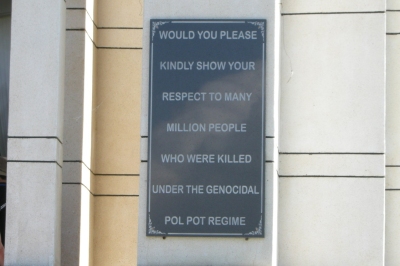 7 Responses to Cambodia: Life along the Tonlé Sap and Mekong Rivers