To put the history of Hanoi in context for North Americans like me, in 2010 Hanoi celebrated the 1000th anniversary of its founding as a city! Currently the capital of Vietnam, it was the seat of the Chinese rulers starting in the 7th century, the capital of French Indochina on and off after 1887, and was occupied by the Japanese from 1940-1945. Clearly, it has been a political and cultural center for a very, very long time. As Vietnam’s second largest city and with a greater metropolitan population in excess of 7 million people, it is vibrant and busy, but for its size surprisingly calm and accessible, almost laid back.

The Vietnamese were more than happy to see the end of French occupation, but the French can at least be credited with leaving a legacy of beautiful parks, charming colonial architecture, and tree-lined boulevards that stand in contrast with the older narrow (but also charming) roads of the “Old Quarter”. There are several important museums in Hanoi (including the extremely sobering Hoa Lo Prison Museum), and the city deserves more days than we were able to give it. I’ll try to illustrate a few of the highlights we were able to take in during our brief stay.

The Temple of Literature was built in 1070 as a Confucian temple, and became Vietnam’s first university in 1076. In 1442 the university started accepting gifted students from across the nation, not just young men of noble birth. Early enlightenment, although I’m quite sure women did not fit into the picture at this time! The pond is called the Well of Heavenly Clarity; surely we could all use some of that. 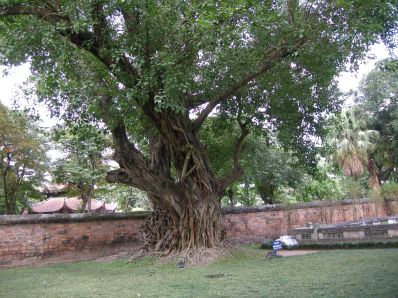 Street scenes. As I’ve said elsewhere, for all the apparent chaos there is amazing method to the chaos. The rule of thumb is to proceed calmly but surely while paying close attention; don’t stop once you’ve decided to cross the street or turn your motor scooter across the prevailing traffic. It seems to work remarkably well. 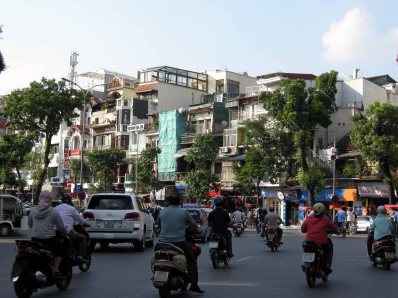 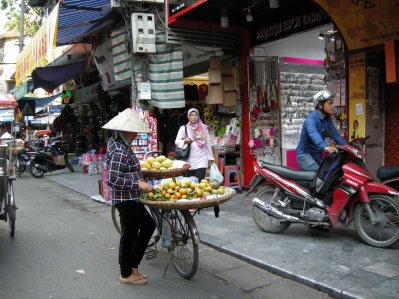 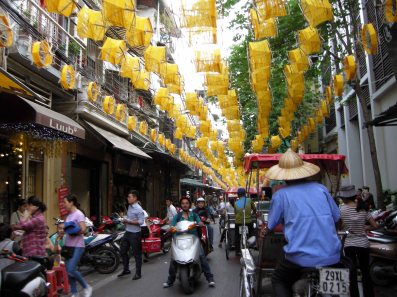 Markets are always a special place and the extensive street market in the Old Quarter is no exception.

Tourists traveling to Hanoi are always advised not to miss the water puppet show. Actually, I think this would be best appreciated by seeing it at the end of a trip to Vietnam rather that at the beginning, but if you start your trip in Hanoi that is a bit difficult! The reason for that observation is that one does not fully appreciate the pervading presence of water in Vietnamese culture until one has seen some of the countryside. Fishing using traditional methods of nets and baskets, extensive flooded rice paddies with water buffalo at hand, and farmers planting and harvesting are all part of the rural scene today. The typical rural scenes, along with depictions of the ancient legends based on these traditions, are all portrayed in this artistic form by large lacquered puppets – yes, in water. Apparently, the tradition of water puppets dates back to the 11th century. (You’ll have to excuse the quality of the pictures; the puppets never stay still and the theatre is pretty dark.)

One of the first things I noticed in Vietnam is the focus on the family. Kids are seen everywhere, including on motor scooters, being taken to or from school by Mommy or Daddy. My family motor scooter shots were too blurry, so instead I offer this group of pre-schoolers being taken to one of the many museums. 🙂

Farewell, Hanoi. Next stop, Halong Bay and some of the villages along the Mekong River.

4 Responses to Vietnam: Images of Hanoi