Vietnam: moving past a legacy of occupation and repression

Back home from a fascinating trip to Vietnam and Cambodia and trying to wrap my head around all that we saw and learned. So many amazing things to see and experience: Halong Bay (Vietnam) and Angkor Wat (Cambodia) are just starting points. And there can be no more friendly people in the world than in these two countries. Where to start? 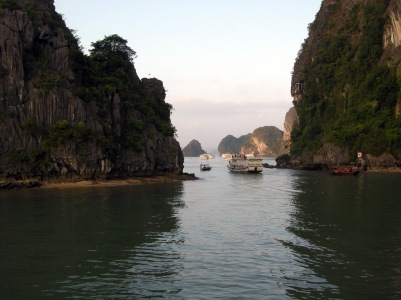 For many of us the shadow of the Vietnam War (known in Vietnam as the American War) looms over any thoughts of Vietnam; one needs to be able to reconcile that period of history in order to fully appreciate all that the country and its people have to offer. Reconciliation is helped by a better understanding of the history of Vietnam. I won’t do it justice, but a few important points may provide perspective. Vietnam is a very old country, dating back in terms of fully formed civilization (music, art, architecture, writing, etc.) to at least the 3rd century B.C. But theirs is also a history of nearly constant occupation, from the India-influenced Cambodian kingdom in the early centuries A.D. to nearly 1000 years of occupation by China, and then the arrival of European colonizers, starting in the early 1500s. There were periods when the Viets gained control of their own destiny, but then lost it again. Prior to the Americans arriving, the French controlled Vietnam as part of Indochina for 100 years. The Vietnamese National Day is actually celebrated as the day they declared their independence from France in 1945 (proclaimed by Ho Chi Minh), although the French weren’t eager to leave, and only finally withdrew in 1954 after causing as much destruction as possible. And in their wake came the Americans, presumably determined to keep this independent country from “falling” to communism. As we all know, getting involved in someone else’s civil war turned out to have been a terrible idea, and the victims were all the young men on all sides – American, South Vietnamese, and North Vietnamese – who were sent to fight each other because of decisions made by others, not to mention all Vietnamese citizens, north and south. When you visit sites where young men (and now women) fought, suffered and died, you are reminded yet again of man’s inhumanity to man and the appalling senselessness of it all. It just doesn’t seem to stop. Three million or more killed, including 58,000 American soldiers, and literally millions of Vietnamese and their descendants left with serious mental and physical disabilities thanks to the effects of Agent Orange. Not a pretty legacy.

That all having been said, the Vietnamese have moved on. It seems that the fact that they have endured so many occupations, repression, and deprivations have helped the Vietnamese develop an enduring culture of helping each other, which continues to serve them well. This culture may well explain their welcoming and can-do nature. The first years of independence and reunification of the North and South after the withdrawal of the American troops were ones of severe hardship under a rigid communist system. And as is typically the case, reunification of previously divided parts of a country that had operated under very different economic systems faced serious challenges. Thankfully, the government realized that the rigid and repressive approach wasn’t working and moved to a market-based communist system about 30 years ago. The U.S. lifted its embargo against Vietnam in 1994, which also helped them move forward economically. Visiting Vietnam today, one cannot help but be very hopeful for a country that deserves a chance to succeed. It has a mighty neighbour at its doorstep in China, and that relationship will undoubtedly always be a sensitive one, but from what we saw Vietnam should have a bright future.

Things you might not have known about Vietnam; I sure didn’t:

Stay tuned for posts that highlight some Vietnam tourist destinations, as well as a look at Cambodia, which has a history and culture all its own.

8 Responses to Vietnam: moving past a legacy of occupation and repression