Hockey and IT, or figure skating and anything but?

Sorry, that’s kind of a strange title, isn’t it! I’ll try to explain. Last Thursday I wrote a blog post about the challenge in attracting young women to careers in IT, after which I became further discouraged by the apparent lack of interest in the subject. Obviously I shouldn’t have been. After all, young women have been avoiding enrolling in engineering programs – and even more so, computer science programs – for decades despite concerted efforts on behalf of many people to change that. Then last Friday evening I had an “aha” moment when my husband and I went to our university hockey game, to which we are faithful attendees, and I remarked as usual on the profile of the fans pouring into the arena. You won’t be surprised to hear that the fans are overwhelmingly male. My “aha” moment was that I observe this nearly every weekend and just find it amusing – an interesting sociological phenomenon, whereas when I see a computer science graduating class pouring into the commencement hall and there are so few women, I am saddened and frustrated. My “aha” moment had me forcing myself to ask why I thought there was a difference between what people are interested in doing in their spare time and what they choose to study. Is it nature or nurture, or maybe a bit of both? And who cares, and why?! 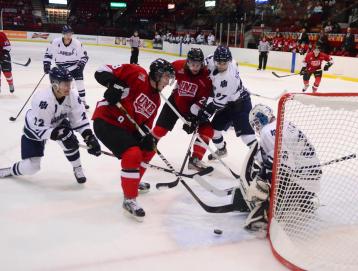 First I should describe our local hockey culture for those of you who don’t have the joy of watching great hockey live. I should start by clarifying for any of you who don’t live in Canada or other hockey-savvy places that by hockey I mean ice hockey (it seems weird to even write that term down). In Canada, ice hockey is hockey and field hockey is field hockey. Our university men’s hockey team, the University of New Brunswick V-Reds, have won the national university hockey championship 5 times in the past ten years. Our hockey team is very strong, and our Atlantic Division is the strongest in the country. We are watching semi-professional hockey. As such, this team isn’t just a team for UNB, it’s the town’s team. And the town comes out in droves: grandfathers, sons, grandsons, and the occasional wife, daughter, or granddaughter.  I love trying to guess the proportion of males to females; I eyeball it at 83% male. It is the only place I ever go where there is no lineup in the women’s washroom and there is often a lineup going clear out the door of the men’s room! I always love seeing that! The bottom line is that attending hockey games seems to appeal more to men than women and I have no idea why. There is nothing I like more than attending an action-packed hockey game on a Friday or Saturday night. 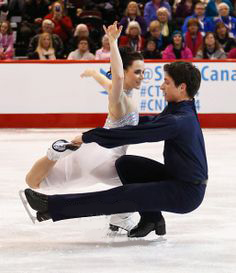 But, as I reminded myself during my “aha” moment at the hockey game last Friday, one has to want to do it. The last time my husband and I went to a figure skating event (a national championship, actually), my husband commented on how he was almost the only male in our section. This is the same kind of observation one could make when leaving the engineering building and heading for nursing, education, or to a lesser extent arts or even law or biology.

So, each of us can choose whether we prefer hockey or figure skating (or both, of course), and whether we want to pursue a career in IT or a career in something else. Just keep in mind that there didn’t use to be any women in university at all, and that there haven’t been women in law for all that long and now it is at least half women. Same with medicine. We are waiting for you with open arms in CS, young women, and so many opportunities beckon. At least give it some thought. Final word: you can study computer science and still prefer figure skating; I can think of several awesome women right off the top of my head who fall in this category! 🙂

5 Responses to Hockey and IT, or figure skating and anything but?