Baja California (Mexico): A sun destination is about more than just the sun

One of the many March Break getaways we’ve taken that stands out for me because of its unexpected offerings other than warm weather and sun was a week we spent in the southern Baja. For easterners, the Baja isn’t top of mind compared to the Caribbean, so I had no preconceived notions of what the Baja had to offer. I just knew I wanted to go.

Most tourists who go to the Baja either go to Cabo San Lucas or La Paz; that’s where the planes fly regularly and that’s where almost all the resort and vacation infrastructure is waiting. But, not always wanting to follow the crowd, we opted for a smaller place up the east coast of the peninsula, Loreto, with a smaller offering of hotels. It provided all the amenities we could have asked for, plus, being a bit further north, it presented the opportunity to check out some places that are (even) a bit more off the beaten track. 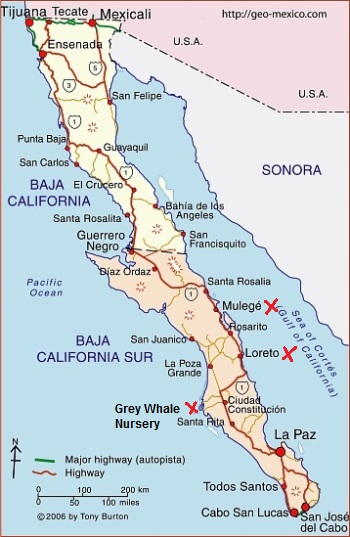 1.     Southern Baja California is really remote. Apparently, most mainland Mexicans consider it the end of the earth!

2.     Baja California is wonderfully dry and mountainous. [It is one of the driest places in the world.] If you like the Sonoran Desert in southern Arizona and environs (think Phoenix and Tucson), you will love the Baja. And don’t worry, you’ll get sun!

From our hotel. Loreto

Inland from our hotel, Loreto

3.     There is no major highway. If you look closely on the map above you will see that there is a road that goes from the U.S. border to the southernmost tip (1200 kms), but it is one road and it is decidedly not major. When you are here you are getting away from it all!

4.     The gray whale nursery at Santa Rosa, at the entry to the Bahia Magdalena where the gray whales come to calve each year, is a bucket list destination in itself. Being amongst these giants – so close – is enchanting, awe-inspiring, and humbling. These enormous animals complete one of the longest annual migrations of any mammal, making a round trip of 10-12,000 miles. They summer in the cold waters of the Bering Sea off the west coast of Alaska, eating what those nutrient-rich waters have to offer, and then mate and give birth in the waters off the west coast of Baja. The coastal barrier islands that form the Bay (Bahia) of Magdalena provide a safe haven for mothers to calve and raise their young before heading north again.

Floating with a gray whale momma in Bahia Magdalena

5.     The story of the building of the missionary and commercial (agricultural) activity up the east coast at Mulegé (pronounced Mool-eh-hey), is fascinating. Mulegé is an oasis, with an abundance of water not found anywhere else on the peninsula due to a significant river there. Indigenous people had lived in that region because of the water supply for thousands of years (apparently there are cave paintings in the mountains). As we know, for better or worse, populations of indigenous people in the Americas tended to attract missionaries looking for people to convert. Following that pattern, missionary activity arrived in this oasis town in the early 1700s. Aside from building the mission itself, the priests had the foresight to introduce the planting of date palms and other fruit trees such as citrus and mangoes, taking advantage of the special local conditions to develop new industry. 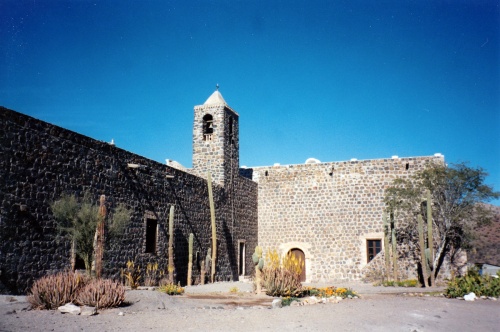 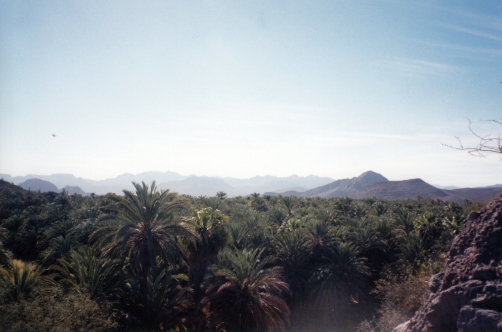 A landscape of date palms and citrus trees at Mulegé

6.     Not surprisingly, the varieties of cactus are amazing.

8.     There are some magnificent strips of beach just south of Mulegé where people from the western provinces of Canada and northwestern states of the U.S. winter in their RVs. It was one of the most peaceful spots I’ve ever seen. The local village trucks in water for the RVers, and they just set up their “homes” on these sparkling beaches overlooking the Sea of Cortez (aka Gulf of California) and chill out for the winter months. Go for a kayak ride, read a book, write a book, …, fly a kite, day dream. For those who are happy making their own entertainment, this is a little piece of heaven.

Coast of Sea of Cortez just south of Mulegé

4 Responses to Baja California (Mexico): A sun destination is about more than just the sun