Life lesson from Stephen Covey: tending the ties that bind

For those of you who are familiar with the late Stephen Covey and his work in leadership and business, you’ll know that his many lessons can be applied to our personal lives as well as to our work lives.  In fact, in his landmark book The 7 Habits of Highly Effective People, Habit 3 is “Put first things first”, which specifically covers principles of personal management.  I recalled Habit 3 recently when I was thinking about how lucky I was to have fulfilled a very long-term wish before it was too late.  In placing “put first things first” in context, Covey asks how many people on their death bed wish that they had spent more time at work.  He makes the point that in order to be effective – and therefore happy – in both your personal life and your work life you need to focus more on what is important to you and less on what is urgent.  This is easier said than done.  The reality is that most of us are inclined to attend to the trivial things that come at us every day and put off what really matters.

“Put first things first” is where Covey introduces his Time Management Matrix, which is a very useful little tool to use, even on a daily or weekly basis, to remind us to make our decisions based more on what’s important and less on what’s urgent.  It looks like this: 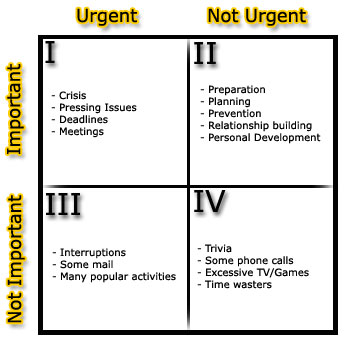 His premise is that we spend most of our time in quadrant I and III, and more than we should in quadrant IV, leaving no time for the most valuable quadrant of all, quadrant II.  Quadrant II is where we plan, reflect, are creative, nurture relationships, and prepare.  We obviously have to do some of quadrant I (especially if a baby is crying), but if we are able to spend more time in quadrant II, there shouldn’t be as many crises arising.  We need to spend a little bit of time in quadrant IV, because we all need some down time, but it shouldn’t take over our lives.  (This is not helped by the ease with which we can all spend countless hours wasting time on the Internet.)

The matrix can also be drawn like this, so that we can put our own categories in each quadrant, or put specific goals and activities in each quadrant for the day, the week, or the month. (If you have a long list in quadrant IV, you aren’t getting the point!) 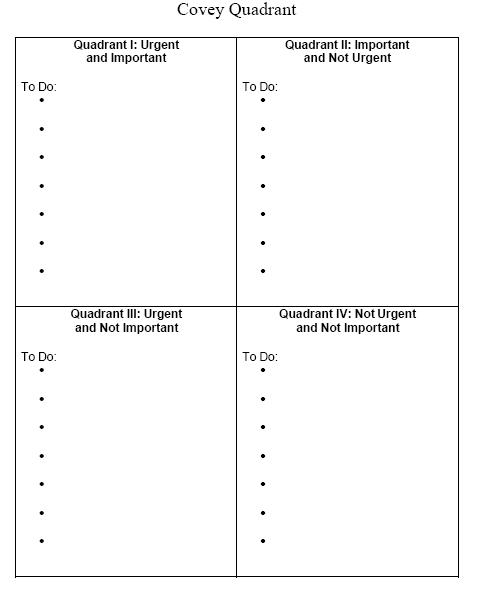 The event that got me thinking about this happened in 2007.  I grew up out on Long Island, in the suburbs of New York City, in the 1950s and early 60s.  My parents both died way before they should have, my Dad when I was in university and my Mom when our kids were very small.  My kids had no memories of ever having been in my home town, and I had wanted to change that for a long time.  More importantly, I wanted them to meet the remaining connection I had to my old neighbourhood, the Mayers.  I don’t know if everyone had a go-to house in their neighbourhood growing up where they spent most of their time, but I did.  Most of the time, I’d come home from school, drop off my books, change, have a snack, and head across the street to the Mayers, to play or hang out with their oldest daughter.  It was my second home.

Mrs. Mayer was one of those special people who everyone gravitated to.  She listened, she responded, she planned activities for all the “grown-ups” in the neighbourhood, she laughed easily, and you felt good just to be around her.  My husband and I had continued to stop and visit with Mr. and Mrs. Mayer whenever we were in the NY area, even though my direct family hadn’t been there since 1974.  It made any trip down the east coast extra special for us.  We loved listening to stories about my parents from the perspective of their good friends; we appreciated the warmth of their welcome; and I was nurtured by the connection to my early life.  My husband came to love them as much as I did.

As I said, I had always had the hope to get our boys down there, but someone would have a conflict regardless of when I made the suggestion.  Finally, in 2007, by way of miracle and me getting a bit more assertive about it, everything came together.  In early May, we drove down the northeast coast through a beautiful spring that was all the more sweet because it had been late in coming.  Our older son and my brother flew down from Toronto, and our younger son, daughter-in-law and 1-year old granddaughter drove down from Ottawa, this son graciously breaking his pact with himself not to go to the U.S. while Bush was still president, in recognition of the special nature of this journey.  The sun shone and the spring green of new grass and young leaves, the profusion of flowering dogwoods, and lilacs in full bloom made for a perfect setting.  My brother, my husband and I toured our family all over, revisiting old haunts like our beaches, our high school (where Phil and I sang our school song, whether they wanted to hear it or not), the church where we were married, and Pinelawn National Cemetery where my parents are buried.  Talk about nostalgia.

But the highlight of this special weekend was our reunion with the Mayers – all the Mayers – in their backyard, just as if it were 45 years earlier.  I couldn’t enumerate the amount of time I had spent in the Mayers’ backyard.  As kids we played tag, red light green light, Simon Says, and May I.  In later years we joined our parents for BBQs when we started bringing significant others home.  Mrs. Mayer had a bridal shower for me there when I came home from Montreal to get married.  We had gathered back there when home with two tiny kids when my mother was so sick.  I knew that house and backyard as well as or better than I knew my own.  I was expecting my lifelong friend, Barbara, and her big family to be there for this reunion; they lived in the area.  But the other 3 Mayer “kids” came too – with most of their kids, coming from California, Massachusetts, and NYC.  I was overcome. So there we were, 4 generations in the same backyard where we had played – and played and played – so long ago: Mr. and Mrs. Mayer, 6 very grown kids (50 to early 60s) plus spouses, 12 or so of their grown kids plus some spouses, and 4 of their very small kids, including our granddaughter.  It was a dream come true for me.  We talked and joked, teased each other, and reminisced as though we were still the kids we used to be.  Our own grown kids must have wondered about us!  We celebrated one birthday, we cheered for our picks as the Kentucky Derby was run, and eventually the sun set on a wonderful day, leaving an important and sustaining memory.

And a year later, my brother, my husband and I returned to the same house after attending Mrs. Mayer’s funeral.

This trip to my home town is an example of something that clearly belonged in the “Important/Not Urgent” quadrant.  But “Not Urgent” doesn’t mean that it shouldn’t be done, it means that you should do it because it is important, not just because it’s urgent.  Maybe not surprisingly, in an on-line list of the 20 things people most regret not having done,  # 2 was not keeping in touch with more friends from the past, #12 was not spending enough time with family and friends, and #13 was not telling a relative who’s now dead that you loved them.  We can use Stephen Covey’s time management matrix to remind us that relationship building – tending the ties that bind – is in quadrant II.  Don’t let yourself put off what’s really important to you.  Minimize your regrets.

In loving memory of:

20 Responses to Life lesson from Stephen Covey: tending the ties that bind