After a pleasantly mild fall and then a lovely warm week on a beach over Christmas, reality has set in.  There is no longer any doubt about what season this is; the instant piles of snow and very cold temps and wind (-20C/-4F) here at home are hard to ignore.  And as I listened to the wind whistling outside our house the past few days, I thought back to some lessons we learned on the farm that were “special” to winter.

As I mentioned in my first blog about lessons from farming, my husband and I had led urban existences until choosing a farm as our first home.  Pretty well everything we encountered was new.  We moved into our new home in May, had our first child three days later, and spent the summer and fall learning how to be parents ( a lifelong experience), how to be country folk, and how to garden (another lifelong experience!), as well as what haying was all about.

Sometime during the fall my husband announced that there was some snow fencing rolled up in the barn; he figured that it must be meant to keep the 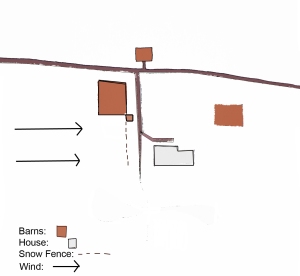 snow from piling up in the (long) driveway.  Of course, this was before the days of the Internet, where you could just look up “installing snow fencing” and get several YouTube clips to guide you.  But my husband is a clever guy, an engineer by training, and he figured out where he thought it should go.  I, of course, didn’t have a clue, and left him to the undertaking of hammering in fence posts, unrolling the heavy and awkward rolls of old fencing, and somehow getting it all laid out and staying upright while he secured it in place.  Come to think of it, that must have been quite a job.  Good thing I had that baby to look after!

He was pleased with how it looked; it looked like a snow fence should.  Unfortunately, as we came to find out after a few snows, it looked better than it worked.  It was placed so as to exactly create an impressive drift right in the middle of the driveway.  Not before the driveway, not past the driveway, but

right in the middle of the driveway.  The upside of this situation was that he now knew how much past the snow fence the snow would fall.  He purchased more snow fence and added a second line at that magical distance on the west side (from whence comes the troublesome wind).  This was an even more effective solution than we would have had if we had known and had started with the fence at location #2.  Our country neighbours, who were obviously keeping an eye on us, commented, “We wondered what you were doing when you put Ralph’s snow fence so close to the driveway, but now we see that you had a good plan all along.  Looks great.” 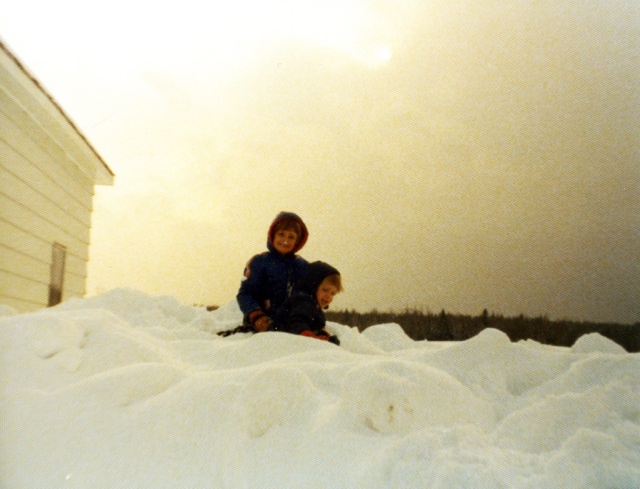 Other Robby posts on farming: