Bhutan: the Dragon Kingdom in the Himalayas

I’ll never forget the day a colleague of mine from electrical engineering came bursting to my office unexpectedly. I had never seen this mild-mannered, middle-aged engineering prof so excited. “Jane,” he said, “I’ve just come back from a trip to Bhutan. I’ve never been anywhere like it. Unbelievable. High mountains surround everything. When we flew out, the pilot seemed to be heading straight into the side of a mountain before making a sharp turn, then continuing to climb but again heading straight towards the side of another mountain before making yet another sharp turn towards yet another mountain side. He was spiralling his way out of the valley in order to clear the mountain tops. Amazing.  Hopefully, you’ll get to see for yourself before long. They are looking at adding engineering and computer science programs at their college and want our help.”

My university had had a close relationship with Bhutan for a long time through our Education Faculty, but it had never crossed my mind that I would be similarly blessed. Fast forward several years. Many Bhutanese students have studied in our computer science programs, both undergraduate and graduate students. We have helped Bhutan’s Sherubtse College develop its own home-grown computer science program, staffed with many of our successful Bhutanese graduate students, of whom we’re very proud. Those of us who were privileged to be part of this partnership had opportunities to spend time in Bhutan, where we also developed lasting friendships.

Bhutan, sometimes called the Dragon Kingdom, is a small Buddhist kingdom in the eastern Himalayas, nestled between two giants, India and the Tibet region of China. It’s a truly enchanting country, with mountains and abundant flora at every turn. Non-navigable mountain rivers rush down hillsides and through narrow valleys. In springtime, hillsides glow with banks of rhododendron and magnolia trees. Prayer flags flutter on hillsides and at the height of mountain passes. Aspects of Bhutan’s unique culture are woven into everyday life, from their local dress of kira and ghos – made from cloth woven in traditional patterns – to the common sight of public prayer wheels to the distinctive architecture of their homes and public buildings. 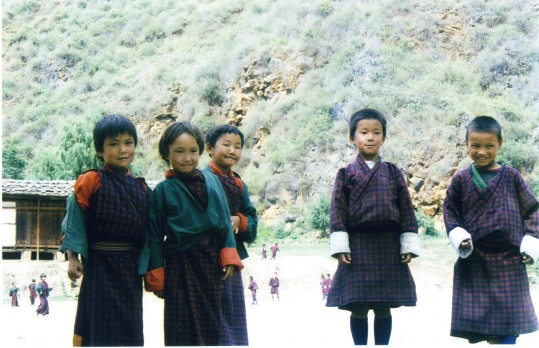 If you’re travelling in Bhutan, especially east of the capital city of Thimphu, one thing you can’t ignore is the road. I say road instead of roads because there is only one main road. And it is a work in progress, continually in progress. When roads are carved into mountain sides (and apparently the mountains are too soft for tunneling), mud and stones obey the law of gravity and keep falling onto the road. The road (in most places in the east unpaved, more or less 1 ½ lanes in width, and precariously close to the edge of a steep mountain side) needs to be cleared and rebuilt on an on-going basis. 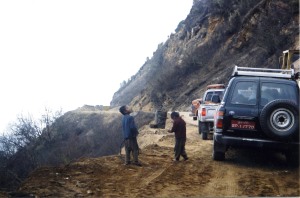 When there is a landslide, either from gravity or rain, and a familiar occurrence, it takes time to get appropriate equipment in place to clear it; that’s just a fact of life. Someone local always drives you, for the reasons stated above! And rarely would you go more than 30 km/hr. The road winds through switchbacks up and down the mountainsides, going from low elevations of sub-tropical areas where banana trees grow to mountain passes at high elevations that are more reminiscent of home, with familiar evergreen trees and the possibility of snow, then back down again. A trip from Thimphu to the college in the east, which I learned the third time I was there can be done by helicopter in 45 minutes, takes 2 days of slow, twisting, near-the-edge driving. Beautiful at every turn, but not restful!

[As an aside, to the best of my knowledge there are no helicopters permanently resident in Bhutan, but occasionally a very rich person (like Richard Gere wanting to visit a Buddhist temple in the east) brings one in for personal use.]

Stop and think about the geographical challenges that a mountainous developing country faces, astounding natural beauty notwithstanding. Along with the never-ending challenge of road building and maintenance comes the challenge of bringing in other infrastructure that is needed for development, namely electricity and communications. An ambitious modernizing program has seen the countryside wired, and because of the terrain, mostly done manually. Without helicopters to provide assistance, towers have been carried in pieces down hillsides and up the next, and then assembled on site. Then wire had to be carried, laid out, and hoisted in innovative ways as well, given the lack of heavy equipment. But it has been done. The college in the far east of Bhutan is able to provide computer and Internet access to their students. A testament to ingenuity, for sure. 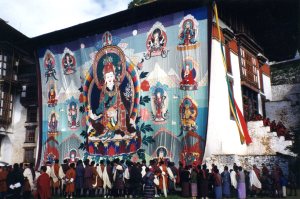 Trondrel unfurled at a Tshechu

Bhutan: #2 of our top 5 favourite trips of all time.

16 Responses to Bhutan: the Dragon Kingdom in the Himalayas